When I was offered the chance to don a white coat, wrap my face in gauze and scrub in to peep behind the scenes at Cathay City in Hong Kong, I jumped at the chance. It’s not often a girl gets to see (and take her camera!) into the hallowed halls of airline foodery to do her own inspection. 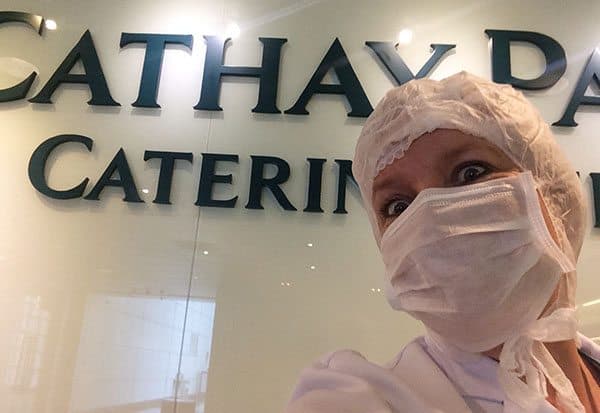 Scrubbed in and ready to inspect!

Cathay’s kitchen also makes food for several other airlines, but today I was more fascinated by the technology of their own robotic tray assembly thanks to a locally designed and made computerised system and to see how the raw materials end up in the trolley on my flight.

One thousand trays an hour chug along this 23-metre conveyor belt getting loaded with bowls and cups (which an “arm” sucks up to put in place) and cutlery before being loaded into the cart. And if the cutlery packet is picked up upside down, this clever machine knows that and flips it over so the Cathay branded wipe is facing up. Cool ay?

Then once the machine has set up the basics (and don’t worry about computers taking over too many jobs, as they are hard to fill being based out at the airport!) the trays pass two food stations where they are manually loaded with salads and desserts before being filed into the carts. 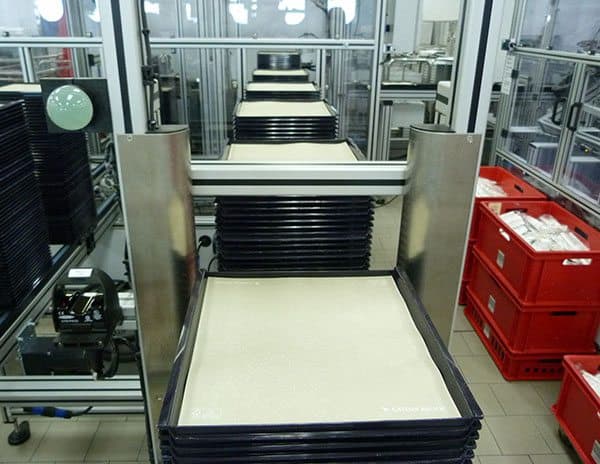 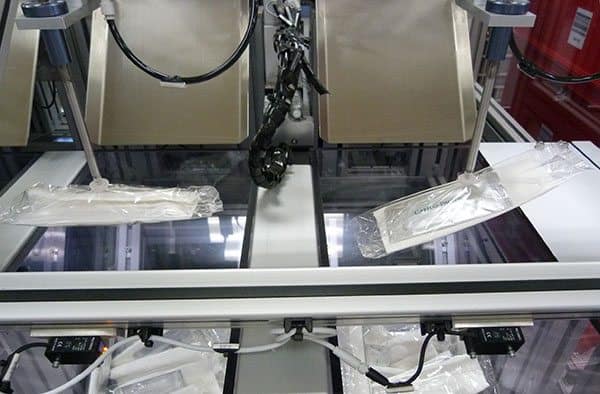 See the packet on the left? 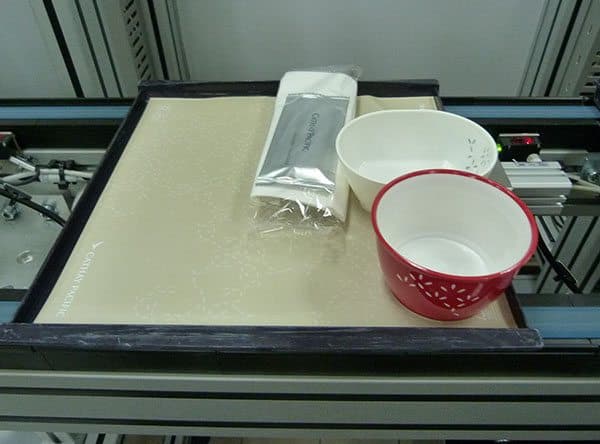 Voila! Flipped over and in place 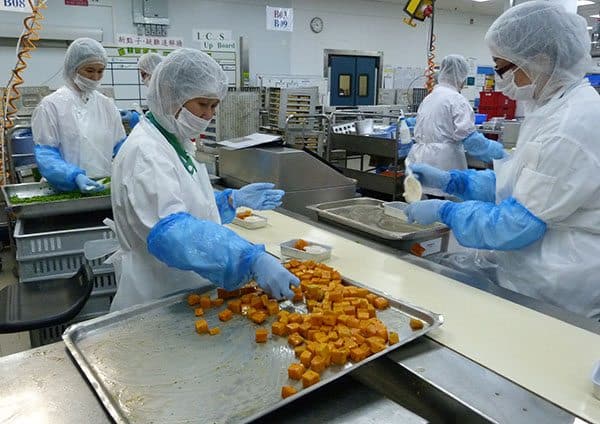 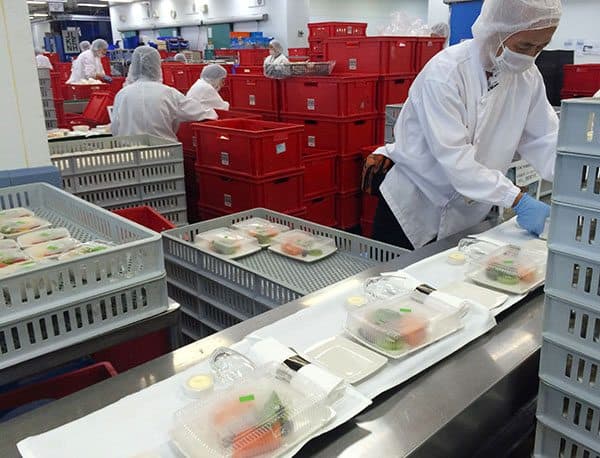 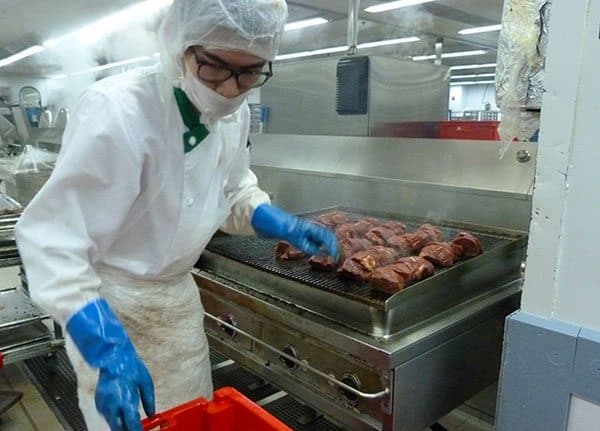 How about these steaks! Just seared then plated to be presented perfectly once heated on the plane. (Note this is for first class!) 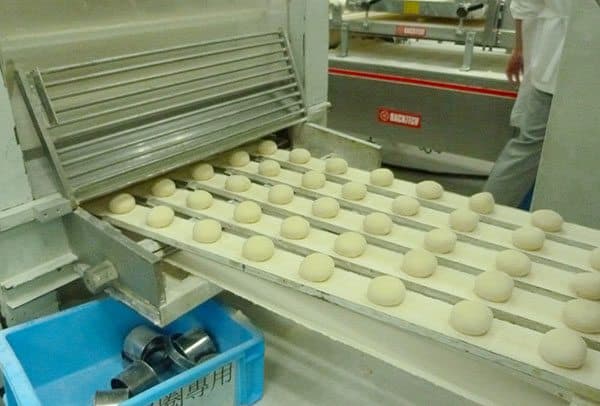 Buns going into the oven… 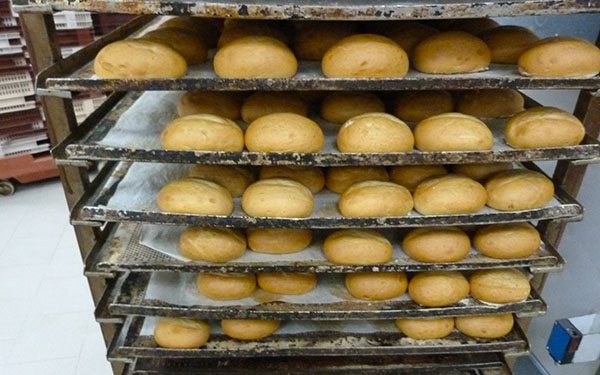 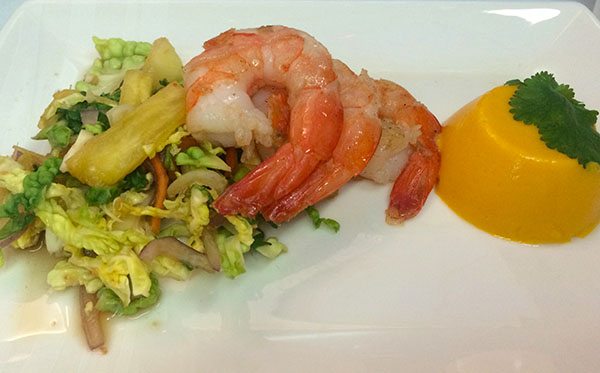 My entree on board in Business Class!

And here’s some stats I found fascinating: Cathay goes through over 1000 kg of beef a day, nearly 11,000 kg of fruit and 7,000 kg of veges per day and a whole lot more of chicken, fish, pork, eggs, rice – and a gazillion homemade buns which also trundle through a conveyor system before ending up on your plate in 37C.

I have been inside airline kitchens before, but this is the first time I have had to cover my hair and face and scrub in like a surgeon – and not even touch anything! 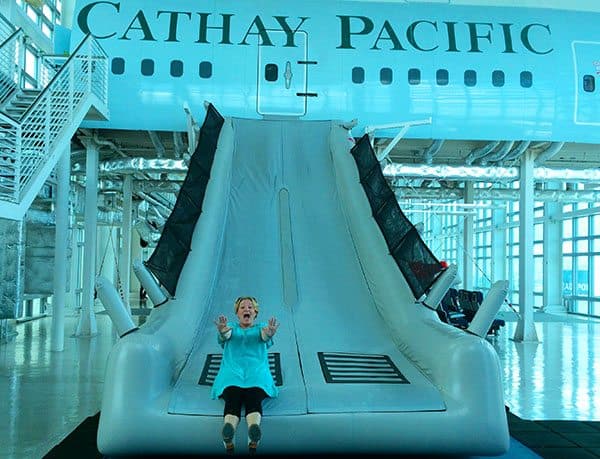 A little bit of behind the scenes malarkey!