I blame the snake infused whiskey I swigged at 10am for making me drop my digital camera down the squat toilet an hour later.

And we’re not talking oil infused whiskey. No siree, the whole slithering beady-eyed serpent pickled and curled into a bottle of whiskey, sometimes with a scorption in its mouth just for effect was on offer to the unsuspecting tourists who’d only moments ago had their cornies and a coffee for breakfast. 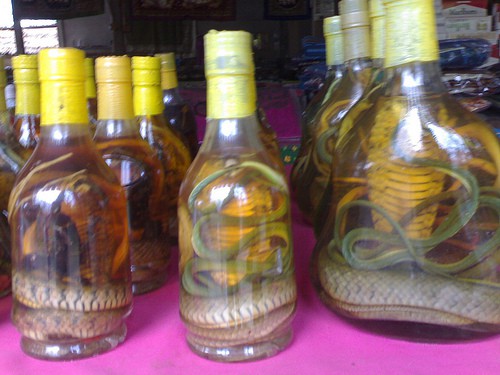 I was spending just a couple of hours on a visit to a tiny village in Laos across the river from northern Thailand and while I’m all for responsible tourism and was sympathetic to their need for tourists to buy their products, I had visions of myself on Border Patrol as one of those mad people trying to smuggle venomous critters into the country.

Suffice to say I did reach into the latrine to pull my new camera out, gave it a rinse, but managed only to rescue the memory card.