“The Mississippi delta was shining like a national guitar,” sang Paul Simon about this slice of middle America. Such a great line, not that I understood what he meant. Until maybe now. 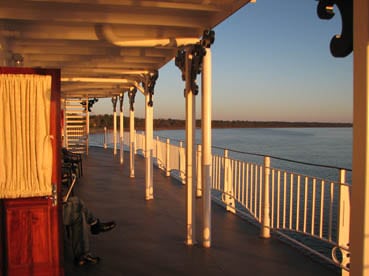 Whiling away the dusk

I’m cruising along the Mississippi on the American Queen paddle steamer from New Orleans and each evening the sky burns from bright orange to pale pink as the sun sizzles into the horizon over the chocolate brown river. This artery carries tonnes of silt to the Gulf of Mexico and in this light it shines like it’s silver-plated.

“I am following the river down the highway through the cradle of the civil war,” is the next line in a confused song about going to Graceland.

My seven-day cruise of history through the cradle of the Civil War stops at towns, cities and former enormous and powerful plantations dotted along the mighty Mississippi.

We start alongside the French Quarter where the river banks have formed a natural levee over thousands of years and were the reason this part of the city escaped damage during Hurricane Katrina. Across the river industrial ports and large ships are docked and on the busy waterway between river barges push up to a hundred carriages laden with coal and crops.

This working river starts some 3700km north in Minnesota near the Great Lakes and if it could tell tales it would speak of wars, strongholds, slavery, dividing lines and places of terrible tragedy where friends fought friends as Confederates and Unionists from 1861-1865 when 600,000 American soldiers died.

I’m looking forward to exploring this part of history, as the little steam-powered calliope sounds our departure tune and the paddle wheel rolls us gently upstream while I sit on the veranda outside my room, French doors flung open, sipping a sauvignon blanc and chatting to my neighbours as we watch the sun melt. These are more boutique hotel rooms than cabins, with plush down pillows on scrumptious beds, antique furnishings, a tiffany lamp harking back to the 1920s when steam boating was in its hey-day. The addition of flat screen TVs and DVD players are a sneaky touch. Most of the passengers onboard are war and history-buffs and all of them great travellers. I’m delighted to find over half have visited New Zealand. 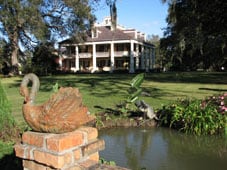 The mighty Mississippi is a law unto herself. She flows as she pleases, carving her own path, cutting off bends and even entire plantations only 100 years ago leaving landowners waking in the state of Mississippi instead of Louisiana where they were the night before. A few of these elegant ‘Scarlett and Rhett’ homes still exist on former sugar and cotton plantations with Houmas House being the best example I saw stocked with priceless antiques and a highly acclaimed restaurant.

Delta plains stretch for miles and fields are lined with oaks as we glide easily into Mark Twain country. The Civil War ended the famous writer’s life as a steam boat pilot on these waters and he turned his acerbic wit to telling great yarns, coming out with cynical quotes like, ‘It was wonderful to find America, but it would have been more wonderful to miss it.’

Samuel Clemens took his pen-name from a river measurement: mark twain equals two fathoms, or three metres. (I must have missed that day in English class.) So with my own copy of Life on the Mississippi (the forerunner to Huckleberry Finn) I try to keep up with his random, wry and often hilarious adventures on these same waters 125 years ago.

He lived and breathed the Mississippi, coming to know every nook and cranny of its ever twisting, hazardous ways to steer a steamer down the inky black in the dead of night, first as a trainee ‘cub’ then as an accomplished pilot. Pilots of his day had to be able to draw the entire journey from memory, with every landmark and potential pitfall, to pass their pilot’s exam (which he did) and earn the prestige that went with it. 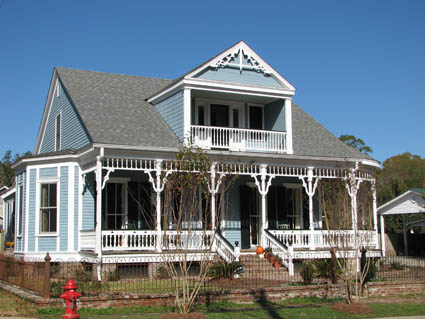 Fortunately there are no such dangers these days as the kilometres disappear gently behind us and we dock in Natchez at first light the next day, site of one of the most intense Civil War battles due to its importance as a strategic port.

This is not stereotypical America. There are no fast food restaurants or theme parks within view, no mega shopping malls or high rise buildings, just small-town heartland reaching down to the silence of the river which today is running so low its silty banks reveal the concrete retaining mats leaning up the sides.

It hasn’t rained in months so the locals are thrilled the skies have opened today. I’m none too pleased but decide to go exploring anyway. It’s Sunday and eerily quiet, but the First Presbyterian Church is a must-see (even if not attending a service) with 500 photographs hanging in an upstairs gallery documenting over 100 years from the Civil War to WWII. I gaze at snaps of families and friends, formal portraits of children and notable people and am particularly fascinated by the wealthy black families who were slaves before the Civil War and land owners after it, owning their own slaves. 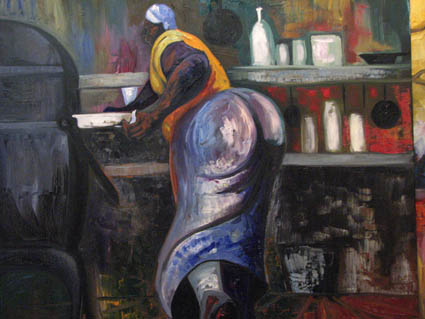 The next morning in Vicksburg the sky is grey but one bright spot is the Attic Gallery bursting with literally a million pieces of art, jewellery, sculpture and eclectic bits and bobs. I’m looking forward to buying a piece of original art as it’s the one thing I wish I’d done from every amazing country I’ve been to. Unfortunately I fall for a US$3000 Kennith Humphrey painting of a black lady with a very large bottom, but after about an hour of rifling through canvases I come upon a fabulous painting of jazz trumpeter Blue Mitchell painted by David Baum. I can almost hear it. Apparently my purchase might cover his rent this week, which is a nice thought as I stagger out with a painting the size of half a door figuring out how to get it home.

I disagree with Mark Twain, it’s wonderful they found America. Well, this part at least.

Have a look at the steam piano (calliope) being played on the back of the steamship here: