It’s not every day you get escorted across an idyllic Tahitian lagoon by a criminal. Especially one that has snuck back onto the island after being expelled.

Everyone is related to someone over here on the atoll of Fakarava. I’m on a small motor boat heading across the 65km long, rectangular lagoon to a teeny, sandy outcrop for a picnic. 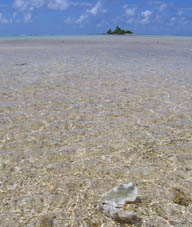 The perfectly clear sea makes it awkward to pee

The captains’ cousin is the man in question and he’s doing the driving. When we wade ashore, I find myself more intrigued in the two of them catching up conspiratorially under a palm tree on this island, barely big enough to swing a cat, than staring in wonder at the perfection of this little piece of paradise.

Coco, our English-speaking Chinese-American guide who was born in Tahiti and is the third member of our hosting party, gathered some dried coconut leaves (yes that’s how he got his nickname – climbing trees like the huge coconut crabs he told me about). He made a fire and the two chilly bins that he, the captain and our escapee driver carried to the spot, revealed their cargo of a table cloth and plenty of delicious food courtesy of the White Sand Beach Resort – the only hotel on the island. Today we’ll be having barbecue steak, fresh raw fish salad, bread rolls, and fruit washed down with a chilled bottle of rose.

Apparently the gendarmerie are due to arrive tomorrow and our guy either has to find a place to hide on this island which is home to less than 900 people on the skinny piece of coral-sand about 500m wide wrapping the enormous lagoon. Expelled for drunkenness by the mayor, I find it rather odd that he’d come back and drive the boat in such an overt way, perched like he was a Thai mahut on his elephant.

After lunch I chat with Coco and suddenly he notices a small mound of sand about half a kilometre away. Fakarava’s newest motu, he announces. It wasn’t there three months ago. As soon as a coconut washes up and sprouts, you’ve got yourself another island, he says. I’ve never understood how people can date islands at millions of years old, and when you see a new island forming before your eyes, it makes you wonder if this world is a lot younger than we are led to believe.

After lunch and the family pow wow is over we get back onboard and head to the tiny village of Tetemanu. I don flippers, a snorkel and mask and splash over the side to view the world below. The colour of the sea is impossibly blue. If a painter was to recreate it you’d accuse him of using artistic license with hues of blues to green and back again. In some places it is deep sapphire blue then others, bright avocado green. Peacock feathers are about as close as I can describe it without using cliches like ‘azure’ or ‘turquoise’. It’s so clear that it’s impossible to pee without lagging quite some distance behind Coco and the one other passenger floundering around.

A mountain studded with undersea flora drops into the deep blue darkness below. Fish hang out in their own cultural groups, nibbling on the ‘flowers’ and just generally cruising around. Fakarava is known for its impressive dive sites and this one is a UNESCO preserved marine site. There is no shark feeding allowed on Fakarava because hundreds of them would come – and we’re talking big boys. Up to four-metre long grey sharks, tiger sharks and harmless little reef sharks. Coco said its like swimming through a wall of sharks and you can’t see daylight above you in the water when they all gather.

But the feeding of them was only outlawed three years ago after a tour operator forgot he had one diver left in the water when he dropped a cage of chopped fish into the deep. The frenzy that ensued saw that guy lose a chunk of his leg. Word spread quickly around the motus so no one feeds them anymore. 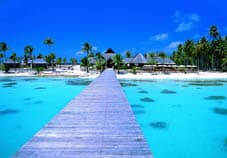 After a fascinating visit to the local pearl farm where I am shown exactly how the famous Tahitian black pearl gets its pink, blue or green sheen, we headed back to White Sand Beach Resort where our private chalets have only electricity for a couple of lights. There is no TV, cellphone coverage or WiFi. It’s perfect.

The sun sets early in Tahiti so after reading a book on my balcony until it is too dark to see I head over to the hotel restaurant before returning to collapse into my comfy bed and can’t help but wonder just how our boat driver is sleeping tonight knowing the gendarmerie is coming tomorrow.

Jump here to Tahiti Tourisme for more information on Fakarava.