I was doing my research for our upcoming Florida Keys road trip when I came upon the menace that is the beautiful yet disasterous lionfish (also known as the turkeyfish, tigerfish, dragonfish, scorpionfish, and butterfly cod).

You’ll know them if you are a fan of aquariums. They are orange and white striped with a mane of 18 venomous sponge-like spikes. They look fantastic, stunning – but they are destroying the coral reefs in this part of the world and in turn decimating the fish population who live off the reefs and taking over habitat space. 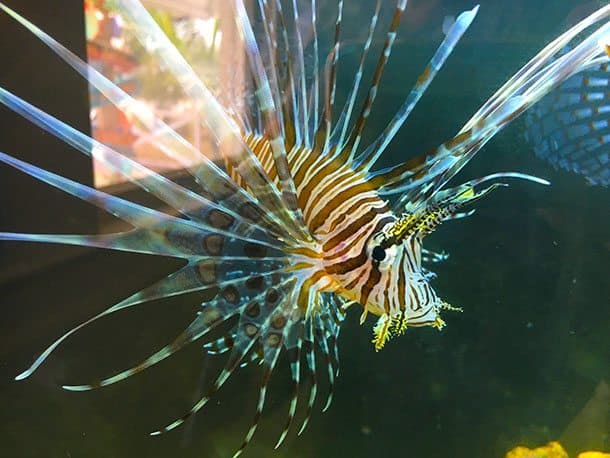 The beautiful sad faced lionfish – this one’s in a tank! 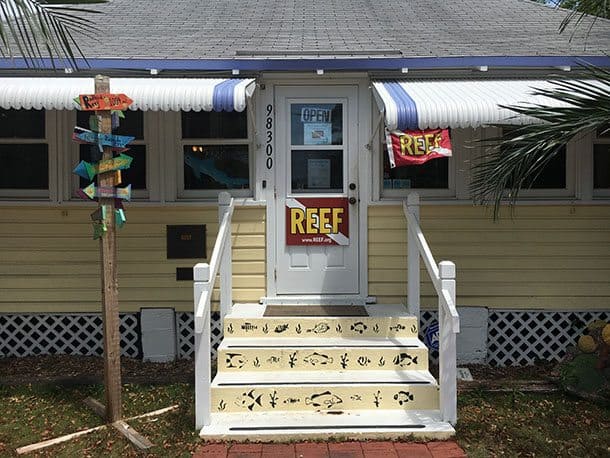 They have HUGE appetites, says Emily Stokes, Invasive Species Specialist at REEF (Reef Environmental Education Foundation) based in Key Largo. It’s an eco disaster. Their stomachs can expand 30 times in size and one was recently caught and cut open to reveal 64 little fish in there!

The lionfish is native to the central and western Pacific where they are kept under control by natural parasites and possibly other predators that are not over here in the Atlantic. Here they are breeding worse than rabbits and their only predator is fishermen/women!

So how did the lionfish problem start?

Good question! They’ve figured out the lionfish were released from an aquarium – either by a private owner or, maybe as someone told me, they escaped after a storm washed away the aquarium in the Florida Keys in the 1980s. Either way, they were initially kept as pretty fish to be looked at by humans through glass (I do hate animal captivity but haven’t fully formulated my opinion on fish in aquariums yet) and lo they found their way into the eco system of the Atlantic Ocean.

The females lay 30,000-50,000 eggs every two to four days year round. DAYS! They have no predator in these waters except humans with spear fishing poles and have been spotted as far north as New York and as far south as Brazil.

What is being done to get rid of the lionfish?

Another great question – gosh you’re good! REEF is an organisation based at Key Largo with several staff whose job it is raise awareness of the problem and try and do something about it.

They’re doing a great job, awareness is so good down here that out snorkelling you’ll not see one. I met an old time diver on a snorkelling trip and he hasn’t seen one in this, the dive capital of the United States, in years as the locals are obliged by law to catch them if they see them. They live near the ocean floor and are quite slow to move, so while the problem is almost insurmountable, they are easy to catch with the right equipment – like Emily is showing me here. 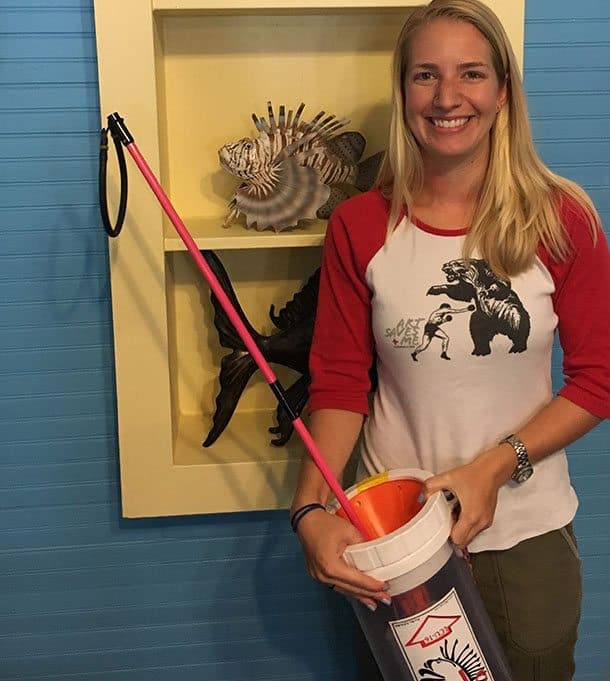 In the Gulf of Mexico the ocean floor is carpeted with them. Crazily in the Cayman Islands divers and fishermen must apply for a license to hunt them, which seems counter intuitive to me when the problem is so vast. However they have also largely eradicated them from their waters and are doing a great job, according to REEF.

Lionfish tournaments occur up and down the coast with rewards for the most caught, and I bought this cookbook, now in its second edition by Tricia Ferguson and Lad Atkins, with recipes from guests chefs serving lionfish in delicious ways. It’s $16 and proceeds go to REEF and their marine conservation. It just won Best Fundraising Charity cookbook in the world from Gourmand Awards too!

But a compounding problem is that they are dangerous to catch if not handled properly and they’re also rather small so there is little flesh on them to make it worth any restaurant’s while really. I went out of my way to eat one on our way down the Florida Keys and stopped at Castaways restaurant in Marathon that is known for serving the lionfish sushi style using its own head and tail as decoration. But at $21.99 for the sushi roll when grouper and snapper is plentiful and cheaper to buy, lionfish demand is not high. 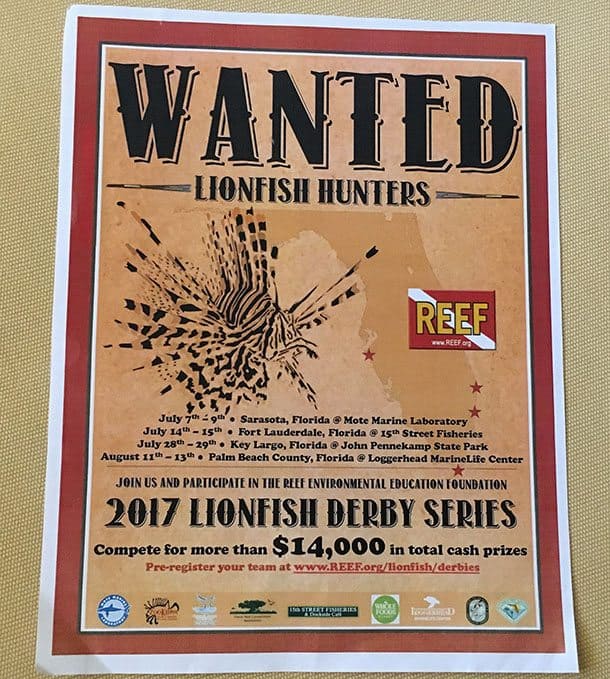 A lionfish hunting poster for 2017 tournaments 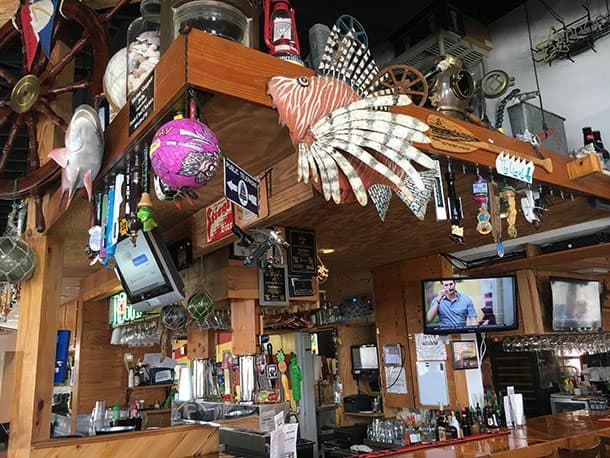 The bar at Castaways in Marathon, FL 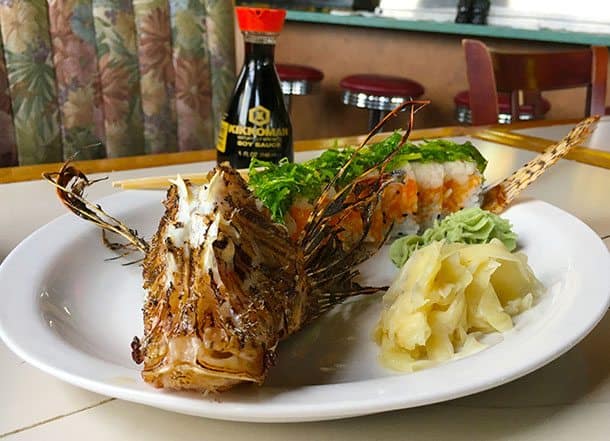 My lionfish sushi roll served with its head and tail!

I suggested to Emily that they need to find fertility or aphrodisiac benefits and launch those findings into the Asian market! Demand would be through the roof and the problem would be solved, I said. They’ve thought about it, she replied with a grin. Only problem is there is nothing to suggest it does anything of the sort. So in the meantime they are encouraging inventors to come up with clever ways of catching them en masse.

They are attracted to structures and are often found in lobster pots so some clever clogs has come up with an underwater scanning trap that would allow any other fish a free pass through but the lionfish would be funneled into a chamber for removal. The expense of this technology though makes it almost impossible to develop, so on they go, farting against thunder, one fish at a time with a spear and a catching bucket and hope that somewhere a solution will be found.

If you want to support REEF and their efforts to eradicate the lionfish or learn more, jump to www.REEF.org

My flight to Miami was kindly supported by American Airlines, upon which I am engrossed in the audio books on their entertainment system listening to Girl on a Train on each sector across the US 🙂

Hi Megan - this is a real problem in the Caribbean too. I struggled a bit as a scuba diver to spear these fish, as I find it difficult to kill anything, but I justified it in the end with the damage they do and that all the lionfish we caught were to be eaten (except for one or two smaller ones that were fed to Moray Eels and a passing shark! On the pointing about eating lionfish - these are amazing tasting fish, one of the best I've tasted!

I wrote an article a few weeks back on the same subject on my scuba diving blog www.scubadivingearth.com, to also get the message out there like you. Great blog by the way.