Who knew Brussels was the birthplace of famous comic characters including Tintin, the Smurfs, Asterix, Nero and many more? 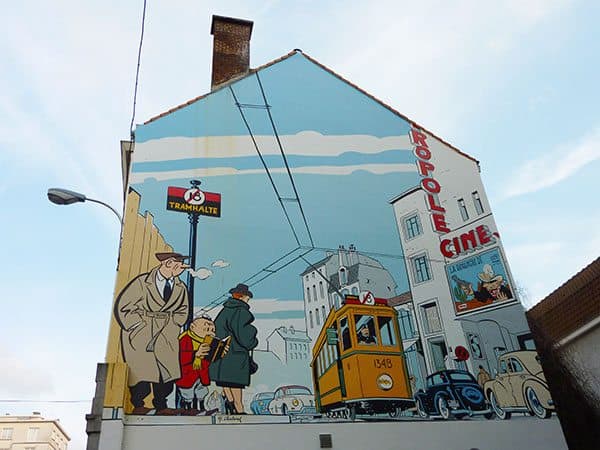 Find the TinTins in Brussels!

Not me, but here they are celebrated larger than life in more than 40 painted murals, sometimes three stories high on the end of apartments, squeezed between buildings or snatching up a piece of otherwise boring wall space, all waiting to be discovered. They’re clever, quirky and retro and you will have fun pointing them out to anyone standing near you.

It’s not what I expected to find in the capital city of Belgium, but hidden around almost every corner are gigantic comic strips painted on buildings that surprise and delight the first-time visitor. 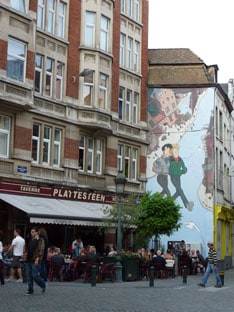 I’m not quite sure who these guys are

For the biggest Tintin mural, head to the Stockel subway station where this best-known mural can be found depicting 140 characters from 22 different Herge comics. The artist sketched the drafts himself before he passed away in 1983 and the impressive work was completed by his studio.

Of course, Tintin has found a new generation of fans thanks to the Steven Spielberg/Peter Jackson movie that came out in 2011. But it’s not just kids who love the famous Belgian reporter, many of their grandparents will remember reading the comic books created by Belgian artist Georges Remi (aka Herge) in 1929 and translated into 50 languages. The famous, red-headed Belgian newspaper reporter and his faithful friend, a dog named Snowy, ended up in all sorts of adventures exploring the world and solving crimes with a dash of political satire that makes the series as popular with adults as it is with children.