Havana, Cuba is ready for you!

We were on a cruise so had two days to see and do as much as we could in Havana (they stay overnight in port so you can also head on the town for some Cuban nightlife too!)

But the first thing I wanted to do was hire a driver in an old Chevy and drive around the city.

From the leather seat in the back of the 1956 blue Chevy convertible with its throaty six cylinders I could see the rain at the end of the road. It was so thick, everything behind it had disappeared into the grey canvas lurching ominously towards us.

Our driver Daniel had already asked if we wanted to put the top up at the first sign of rain drops, but the sky above was blue and the temperature was a hot 30 degrees C pushing about 100 per cent humidity. Nah, we’re fine, we said with a wave of our hands, enjoying the cooling effect that six drops provided.

Besides I had my camera glued to my face or thrust into the air to capture every angle of the photogenic city of Old Havana, so I was keen to keep gawking and snapping as he drove us around his hometown.

Push play on my quick video of 90 seconds in Havana, Cuba!

We’d hired Daniel for half an hour for 20 CUCs (about US$20) and asked him to take us to Revolution Square. The square with the two communist administration buildings bearing the image of Che Gevara on one and Camilo Cienfuegos on the other, another of the leaders during Fidel Castro’s 1959 revolution.

We’d been there earlier in the day as part of our ship tour and I’d lined up the hero image when a pink Cadillac happened past. Like a dork I got a partial finger blur on the best iPhone shot of the day and I was frantic to try for a repeat. Daniel kindly obliged and stopped to let me out at the designated spot (note, he wasn’t going to risk pulling over in front of the monuments with all the security guards/police around). My husband scooted into the front seat and with his arm hanging out like a farmer, they cruised by. Mission accomplished.

Driving back to San Francisco Square where our ship was docked, I drank in the street scenes as thirstily as the Hemingway daiquiri at El Floridita earlier that afternoon when we’d peeled off from our fellow cruisers and went cruising the streets on our own. Cars of every description from the old classics in various states ranging from rust buckets to shiny movie stars crisscrossed past us. The latter usually bearing tourists with the wind in their hair. Children kicked soccer balls or played baseball with anything they could hit around.

What you don’t see are motor scooters. In a city with narrow alleys and piazzas, this is usually the number one form of transport (think Italy). Not in Havana. Public buses don’t have windows and houses are brightly painted to hide their states of disrepair.

The shopping is non-existent unless you count souvenirs. I do, so was pleased to find art and crafts in shops down most alleys and at the fabulous Art Market near the port. The selection of paintings was so overwhelming in an hour I hadn’t been able to decide. With a panic on in the last moment I bought one for about $40 and hope it’s going to look good back in New Zealand. (Addendum: it does.)

Suddenly the rain was upon us. Daniel pulled to a stop in angle parks in the centre of the wide road and while other classic cars sat parked with their tops down and their drivers no where in sight, he hoisted the frame out of the back seat and clipped it down. No automatic switches here! Winding up the windows I kept snapping at the now torrential conditions as we marvelled at the streets now flooded and visibility down to about 20 metres.

Finally we set off again and he pulled into the port and out we jumped, adding a tenner for his troubles and headed back onboard the Fathom ship from whence we came.

Scroll past these pics for my 7 best tips for Havana… 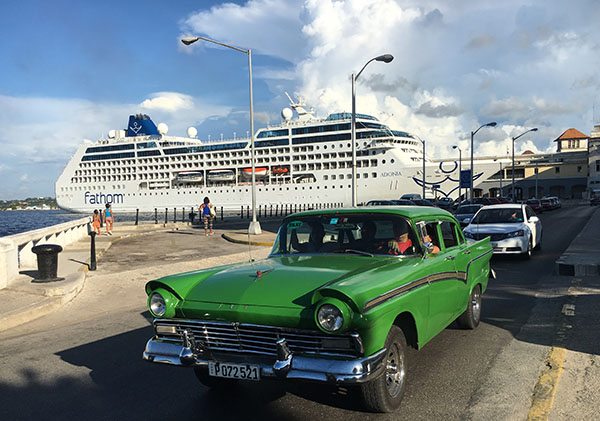 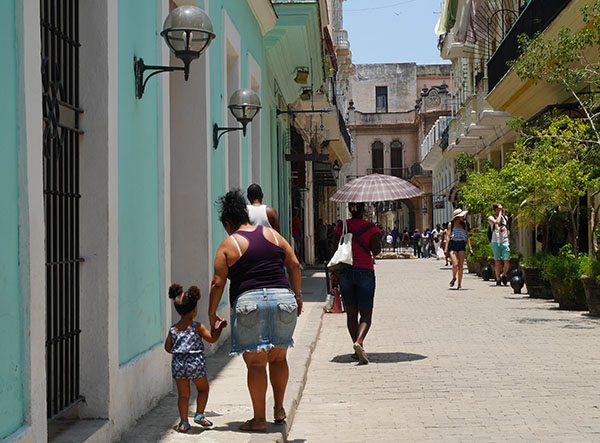 I love this little girl’s hair! 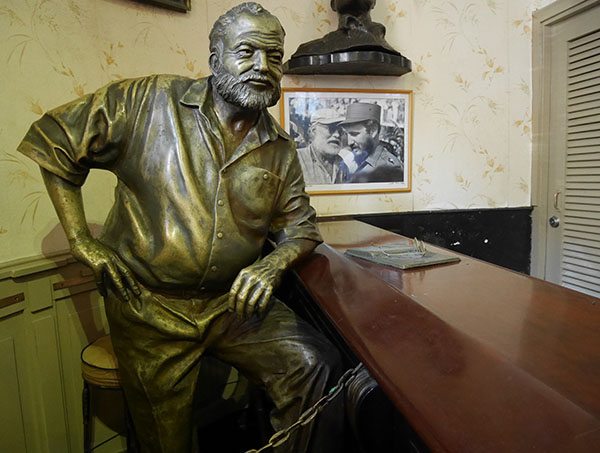 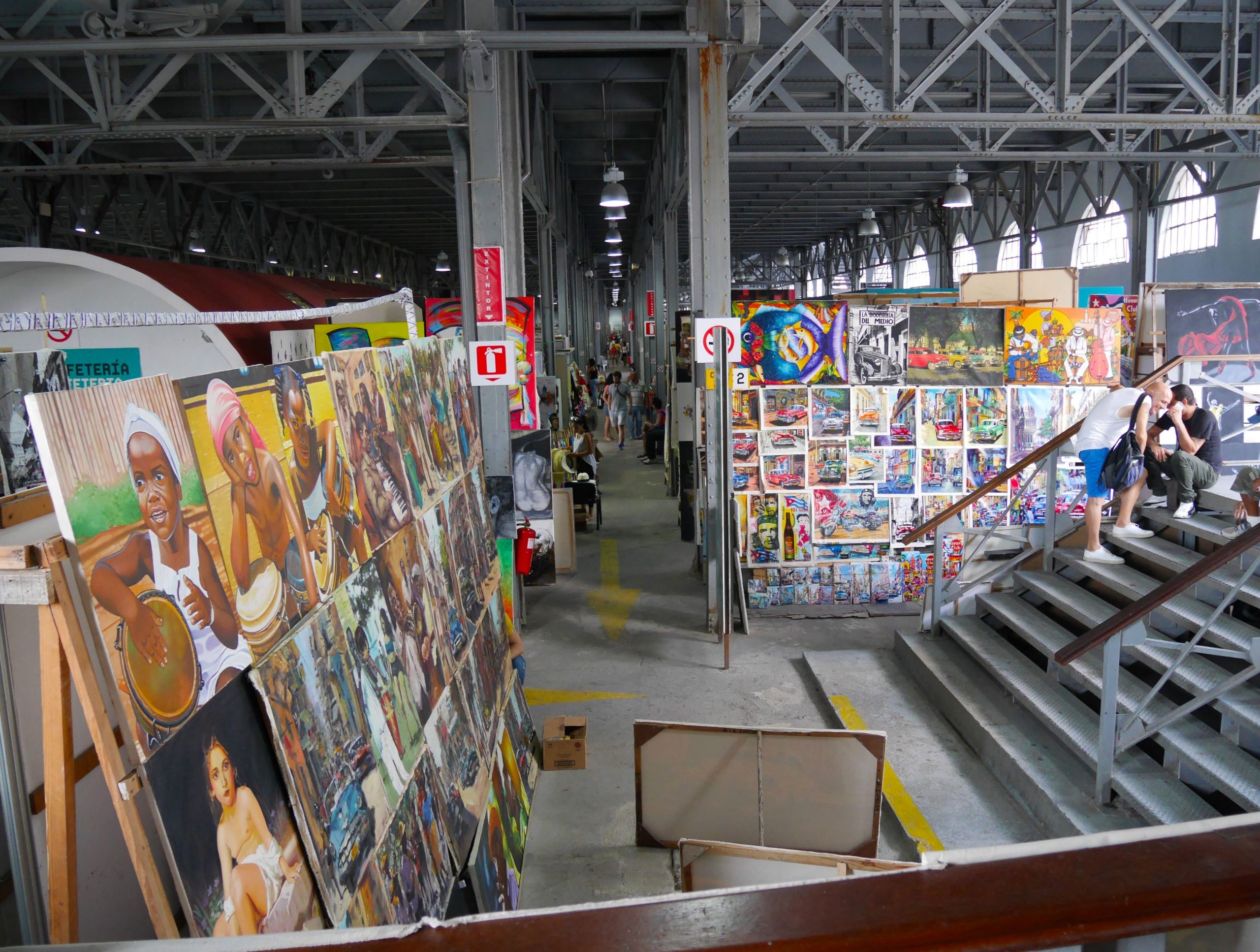 The monstrous art market – plan at least an hour here! 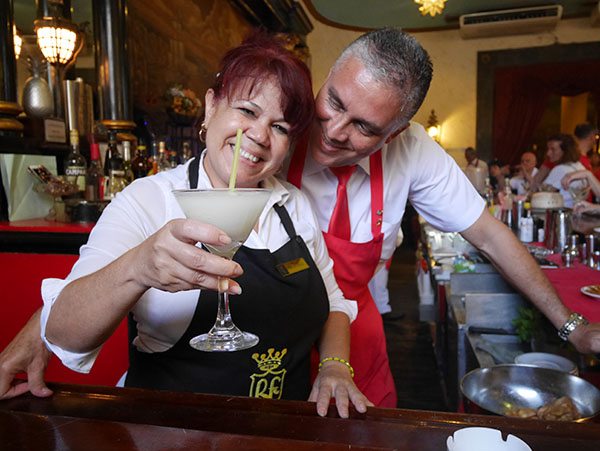 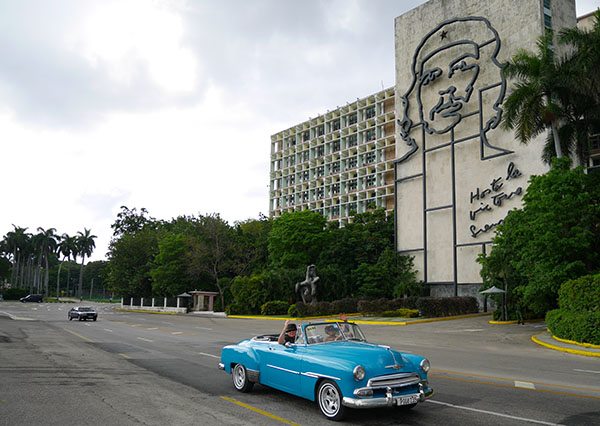 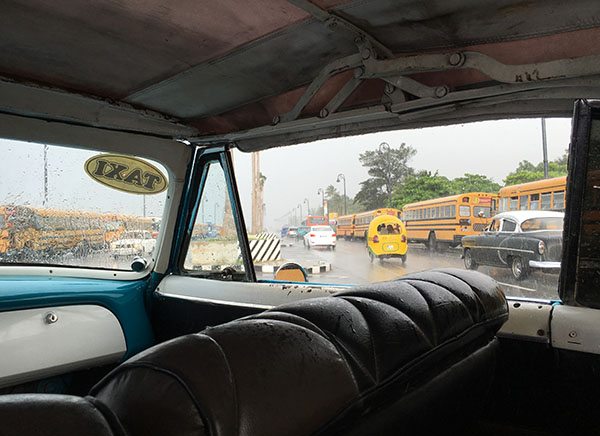 And down it came 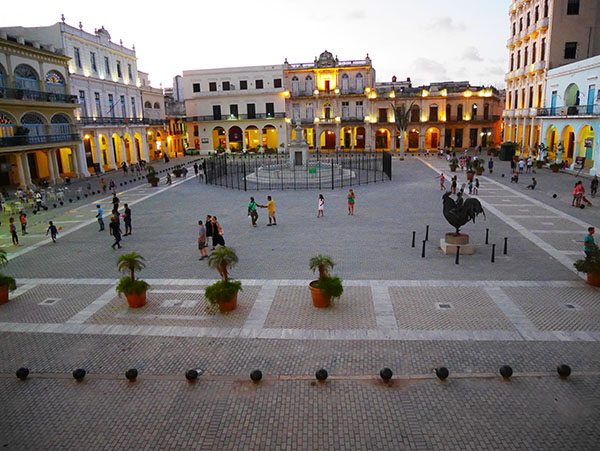 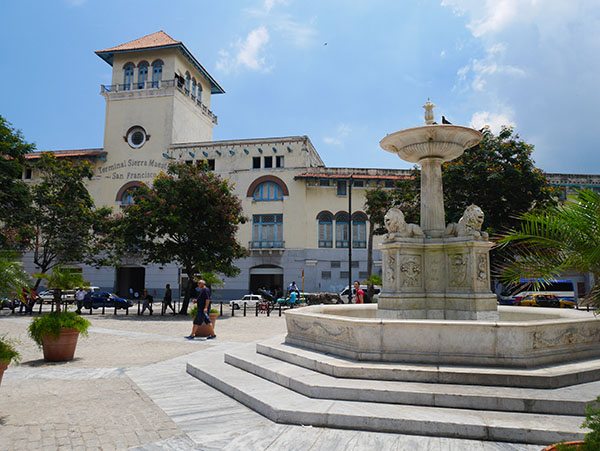 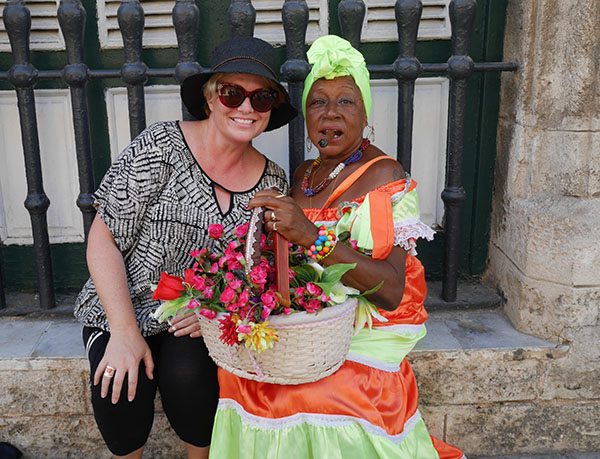 Me and my new friend! 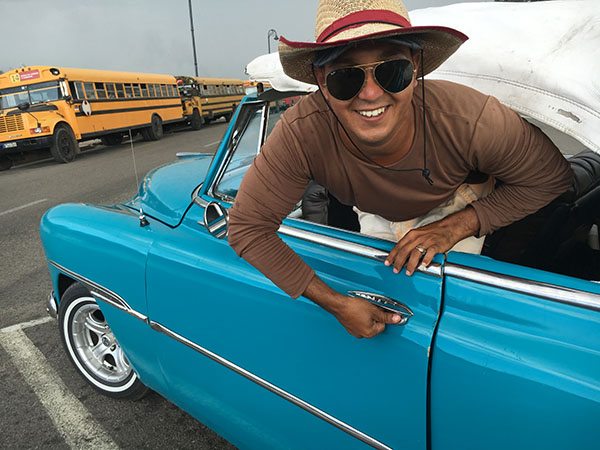 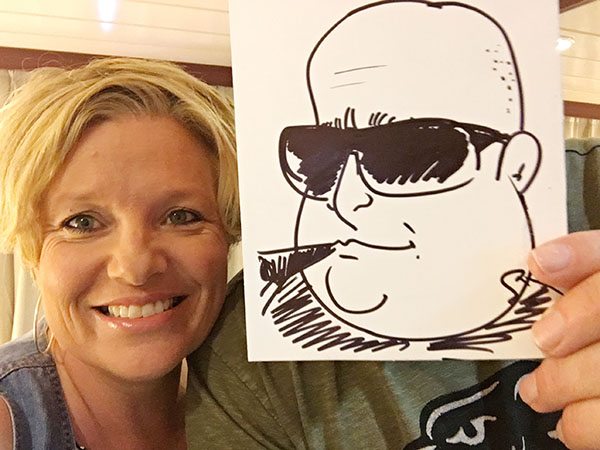 I love their street artists! 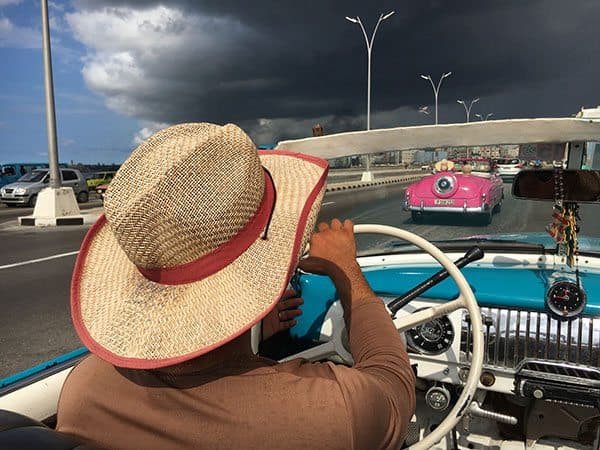 1  It’s hot! If you come any time from May till September it’s roaring summer and the humidity will turn you quickly into a puddle (See my post on how to avoid chafing in sticky countries!)

2  Bring good walking shoes. The streets and squares are perfect for getting lost in and you’ll end up easily hitting your 10,000 steps by the end of the day.

3  Change your money into CUCs (about 1 CUC to 1 US dollar) at the airport or port. You can tip in US dollars but can’t buy anything in them.

4  Chat to the locals. Their English is quite good (certainly better than my Spanish) and this is part of the real experience of travelling, especially in Cuba.

5  Expect to pay 1 CUC if you take a photo of a person dressed in costume. They live on these tips, so it’s rude to take their photo and not pay them. You’ll also find people drawing you and rushing up to try and sell you the postcard. We paid 2 CUCs. Probably could have paid 1, but I like it!

6  Bring a US power adapter. I also travel with a small multiboard so everything can be charged at once.

7  Take a classic car for an hour or more and let the driver show you around. Their English will be great and you can ask every question you like! Including their monthly salary ($40 for everyone), rations, free education and health care, etc.

Planning your trip to Cuba?

Here is my latest post on 20 things to know BEFORE you go to Cuba, from tipping to visas, how to much to pay for things and what gifts to give away >>>