Spoiler: this post has nothing to do with Donald Trump or the wall, but it IS astonishing! A ball game where the losing captain would likely be decapitated…

But thanks to Trump’s war of words (and let’s hope nothing more) with his southern neighbour, Mexico is copping a lot of flak.

Personally I think Mexico as a holiday destination is fabulous and seriously underrated. (I know, not a very smooth segue). Especially in the New Zealand market where it seems Kiwis only want to fly to USA, Asia or Europe. But Mexico is a treasure trove of ancient culture and art, history and beliefs, of conquerors and con carne and I would go back for another visit in a heartbeat.

SO! What does that headline have to do with this post, you ask. Good question. I shall get on with it.

If you stay in Cancun one of things that you probably already have on your agenda is to visit the ancient Mayan ruins of Chichen Itza. (And if you don’t have it on there, add it now!) 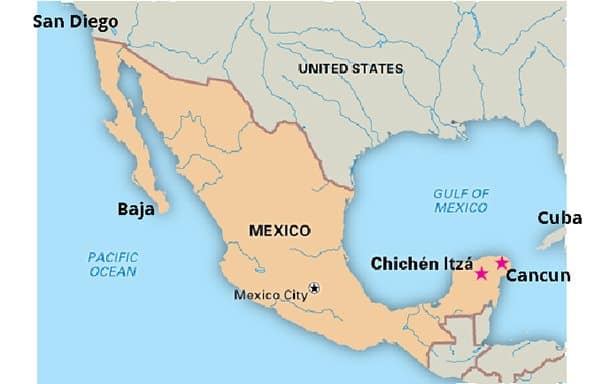 By the way, see how close Cancun is to Cuba? I just checked on Skyscanner and see you can fly return from Cancun to Havana for under NZ$300. But I digress….

Chichen Itza (pronounced cheechen eetsa) was the largest Mayan city and is located on the Yucatan Peninsula from about 600AD to 1200AD. It’s hey day was the 10th Century and judging by the many types of architecture, it is believed it was a multicultural city.

It takes just over two hours to drive to from Cancun. Lots of people add the seaside ruins of Tulum (on the coast south of Cancun) and make a full day of it.

Check out Chichen Tours with Viator.com >>

Tip: take your swim suit for a dip in one of the famous and enormous sink holes or ‘cenotes’ draped in climbing (hanging) plants. 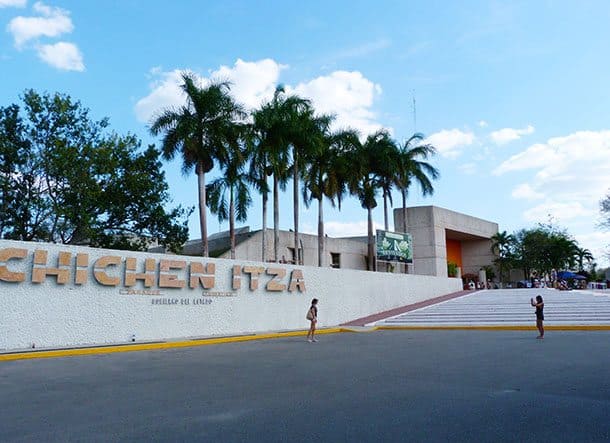 The entrance to Chichen Itza 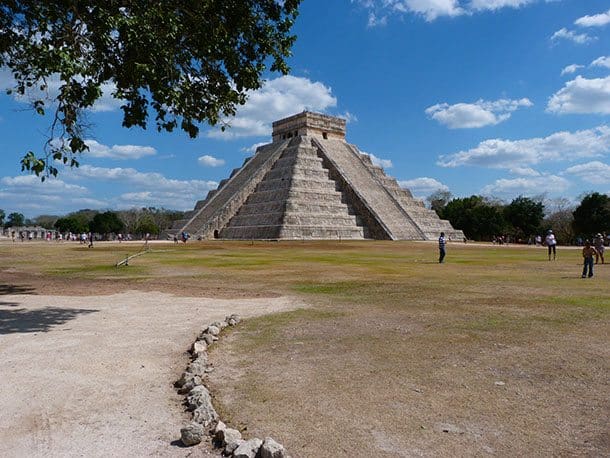 Chichen Itza is most famous for the enormous pyramid that crowns the flat grass edged in souvenir sellers – and you will pay an admission fee to the park. But it’s worth also taking a guided tour (I always think guided tours are worth it because you miss so much if you just wander and look) around the many ruins and sculptures to find out the tales and history. See the Temple of Warriors and the Caracol, the restored pyramid El Castillo and the Great Ball Court. This is where I learned about the fierce Mesoamerican ballgame where death was often the fate of the losing captain… 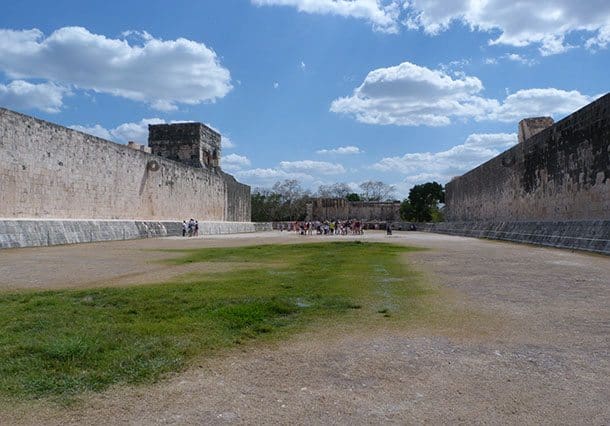 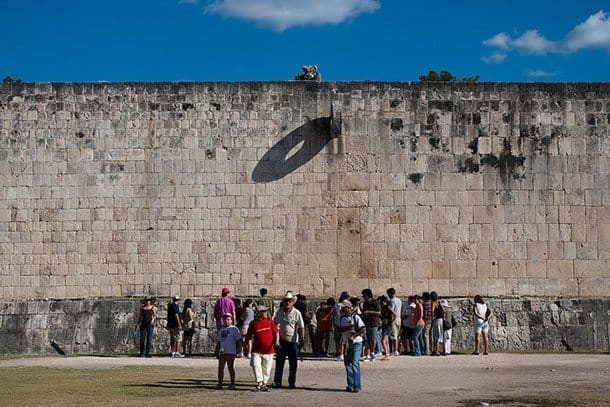 A great pic of the hoop. Pic Flickr/EricB

This ball court at Chichen Itza is one of the largest that has been discovered between Arizona and Nicaragua (there are 13 ball courts here in Chichen Itza alone), but they all have sloping concrete sides in common and latterly the stone rings were added about six metres above ground.

The game is played with a hard rubber ball made from latex-producing plants found in this part of the world and ranging in size from 12-30cm. The rules are hard to verify and there are versions of the game still played today, but according to drawings and friezes on the walls of ancient stadia, including here at the Chichen Itza ballpark, it was played by teams of two to four players and you could only use your hips to bounce it. Sometime later it seems forearms were allowed and in some versions there were sticks or bats.

Note the stone rings carved high into the wall? If you got the ball through that you won. It looked to me like an ancient version of quidditch!

There are reports of players getting injured and of such bruising that they had to be cut open. But wait, there is also the added twist of human sacrifice, which – to be fair – didn’t occur in every game, but it happened often enough for carvings of victorious captains holding the severed head of his opponent in triumph displayed on these walls. Sometimes the games were rigged. 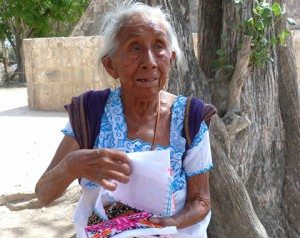 I bought 3 hankies from this adorable lady

But aside from this horror, Chichen Itza is a great place to visit for its many ruins and locals selling their wares, like this little lady who spoke no English with her embroidered handkerchiefs for which she wanted $1.

I also stayed a few days in Cabo on the Baja Peninsula and loved it! You can read about that here >>

Check out Chichen Tours with Viator.com >>