One of the most luxurious lodges you’ll find in New Zealand is The Farm at Cape Kidnappers in Hawkes Bay, on the east coast of the North Island.

How bout this for a view! This is taken from the spa set on the hill above the main lodge.

Owned by American billionaire Julian Robertson and managed by his son Jay, this is just one of the family’s amazing lodges. You’ll also find one in Northland (Kauri Cliffs) and another in Queenstown (Matakauri Lodge). He is now retired, still involved in hedge funds in New York and an active philanthropist giving half his wealth to Bill Gates and Warren Buffet’s charity. 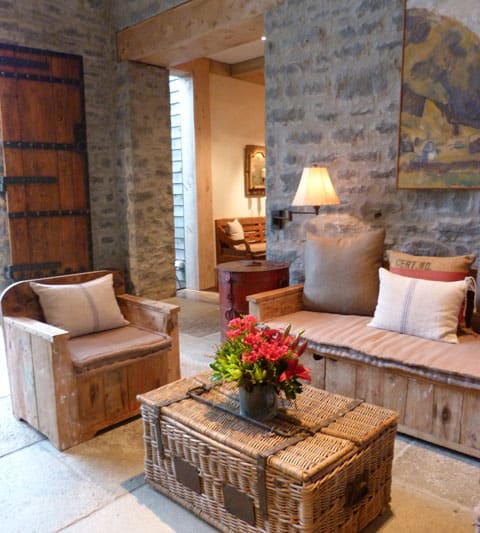 Step inside the main doors and this is the lobby

But Julian and his late wife, Josie (who passed away in 2010), fell in love with New Zealand in the 1970s, holidaying here each year with their 3 kids. Mr Robertson has even been made an honorary knight in NZ  for their philanthropy. The couple are donating a huge part of their art collection to New Zealand upon their deaths which includes Picasso, Gaugin, Cezanne, Matisse and Mondrian and is valued at $115 million – more than the expansion of the Auckland Art Gallery! 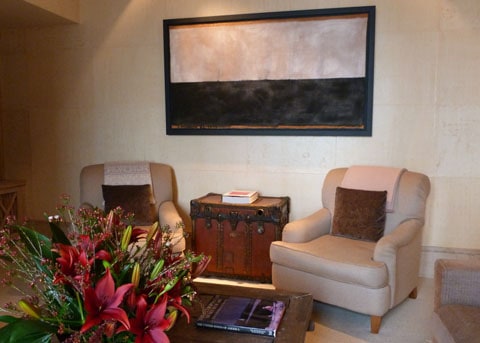 One of the Colin McCahon paintings in the lodge

Excitement was running high as my husband and I drove along the ocean road of Te Awanga on a drizzly day last weekend, past the ricketty baches about to fall into the sea (I know this because one used to belong to our family and it did fall into the sea!)

We turned into the double gates at the entrance of the 6,000 acre farm and drive up the 11km private road with a creek running beside it and sheep and cattle grazing among the pine trees. We allowed 10 minutes from the gate but because it was bucketing down I’d say it took 20 mins. 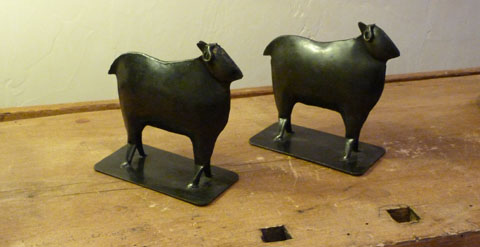 Just a little detail I spotted 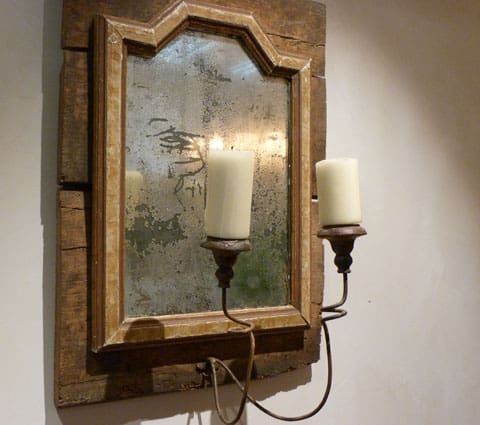 The collection of farm houses includes the main lodge, 24 suites, a day spa and pool area. It’s rustic and state-of-the-art all at once, cleverly positioned to make the most of the stunning views over Hawkes Bay and the light. There is a private courtyard for reading a book or having a drink, a wine cellar downstairs for private events and little nooks and rooms discretely hidden all over the main lodge, so you never know how many people are here. 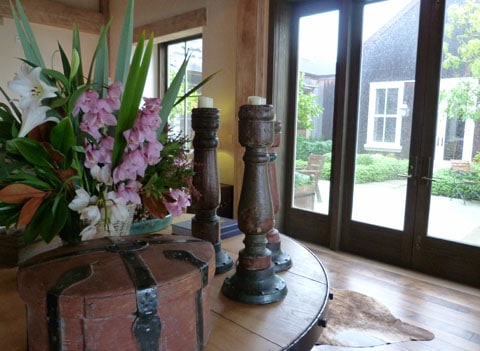 I counted 5 open fire places to plonk in front of. This is where we came for pre-dinner drinks

Kerry, the manager was hands’ on with the golf cart and helped us get to our a-mazeballs room. Despite the view over the reservoir and ocean being blanketed out by the heavens, I was happy as a sandboy with what I found. (Bedroom pics further down, we’ll get to the main lodge and dinner first).

Here’s me back in the pre-dinner drinkies room sitting on THE couch that used to belong to Demi Moore and her first husband Bruce Willis. It’s affectionately known as the Divorce Couch. Oops, probably should get off. 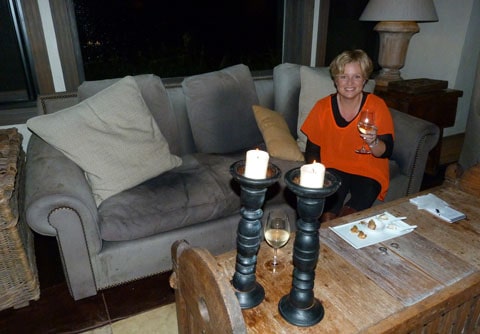 Now to our 4-course dinner.

Pre-dinner drinks, a 4-course dinner and breakfast are all included in the lodge stay. 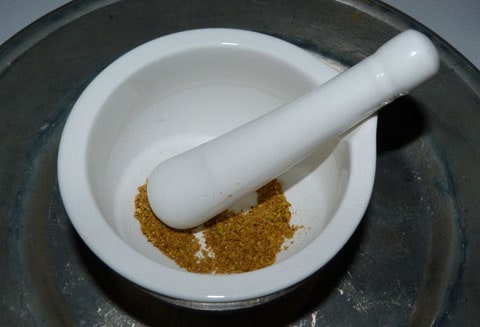 Such a great idea! We got to grind our own dukka for the warm ciabatta and sour dough bread with locally made olive oil. I’m copying this! 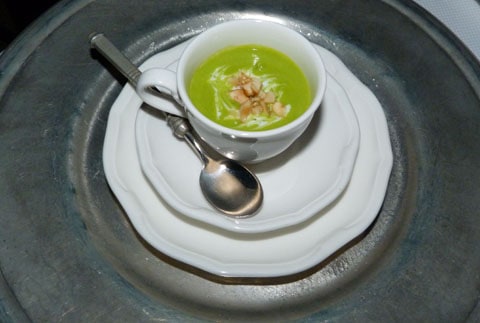 This little amuse boush came out before our 4-course dinner. It’s a thick pea soup which I sooo am going to make at home.

Incidentally we got chatting to the table beside us, an American family with 2 high school-aged kids who were staying here in between Treetops and Eicharts. The daughter is vegan and the chef made her a red curry. They were very impressed with how the lodge catered to her dietary requirements. But then they did let them know in advance, and what chef at a 5-star lodge wouldn’t have a trick or two up their sleeve to whip out?! 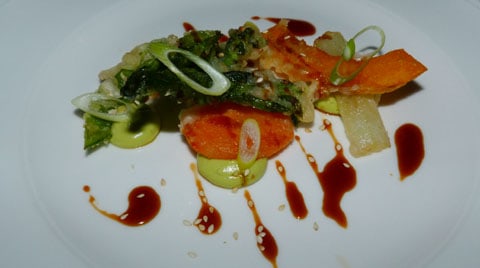 This is the tempura vege dish which can be served small for a degustation size or a la carte. Delicious, light – and kinda healthy? 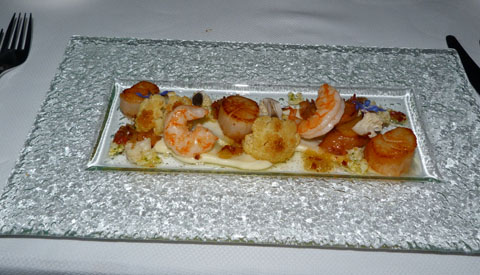 This was the 2nd entree option, scallops and prawns served with teeny flowers. 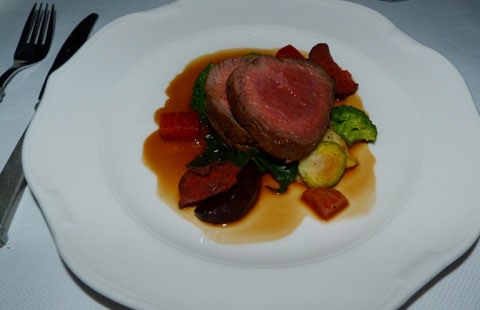 This perfectly cooked medium-rare eye fillet was melt in the mouth delicious. The 2nd main meal choice was pan fried snapper, but both of us went for the iron intake. 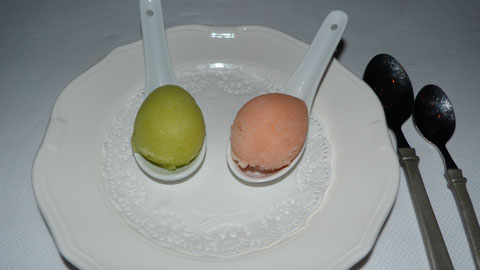 I chose the melon and green apple sorbets, but could have also had homemade hokey pokey, banana and vannilla. Sadly I had no room for the cheese platter which I saw delivered on a tray to be selected from at the neighbouring table.

This villa with a gas fire and secret TV hidden behind a picture has sweeping views over the farm and across Hawkes Bay. Sadly when I stayed it was white-out rain and mist, so I clicked away inside instead. 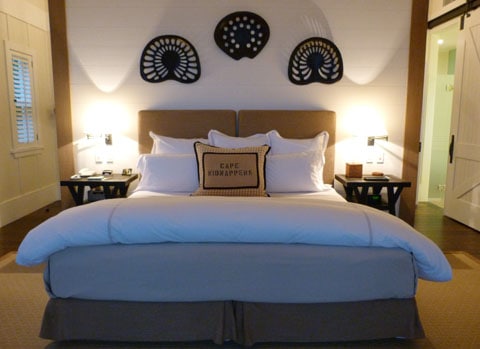 Love this look with the tractor seats on the wall. This bed is super king and plenty of room for the kids to jump in too – if you bring them! 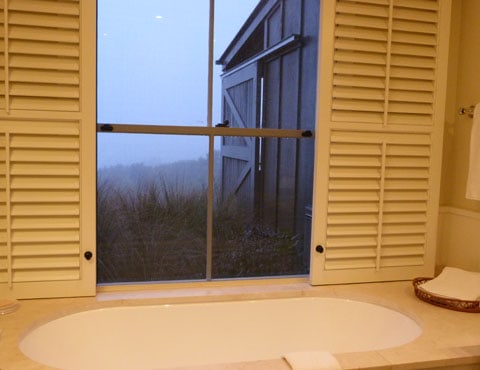 I most definitely ran this bath and filled it to the brim with bubbles before dinner.

Back in the lodge for brekky… 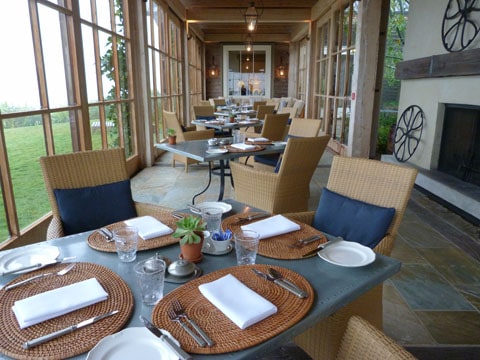 We chose to sit on the veranda for breakfast, although the main restaurant was also set. On a gorgeous summer’s day these huge French doors slide open and the outdoors comes indoors.

The breakfast table was laden with cereals, freshly baked croissants and mini muffins, but I loved this arrangement the most. Little bowls of fruit compote and yoghurt to flavour things up a bit. We ran out of the room to follow it with the cooked breakfast which was a choice of eggs benedict, a big breakfast, pancakes and more. 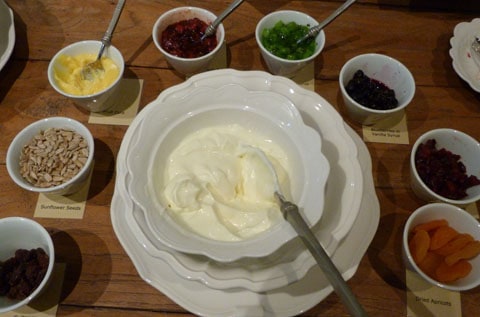 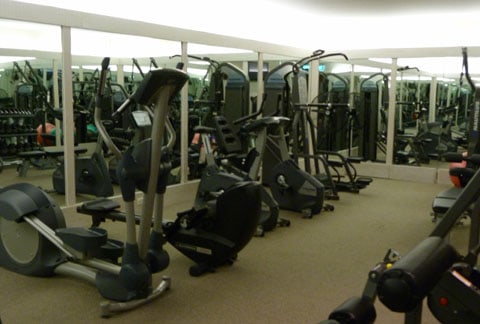 And then of course we went to the gym. Yeah right.

And there’s the golf. Ahem, this is actually what most people come here for! The course is one of the most outstanding in New Zealand and if you like a challenge, you’ll really love this. It’s ranked #33 of the top golf courses in the world. (Click here for more info on the golf course) 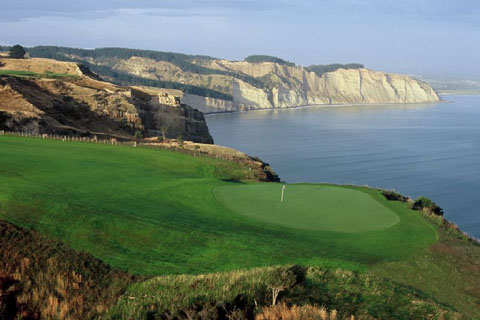