Cusco is one of Peru’s most amazing cities. It’s way up high in the Andes (3399m) and is the breathless pivot point for visiting the ancient Inca city of Machu Picchu, Sacred Valley and Sacsayhuaman. 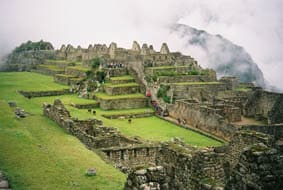 When the clouds clear

The one hour flight from Lima gave me plenty of time to become paranoid about the effects of the altitude that might befall me. It strikes randomly and your level of fitness seems to bear no significance (which I took as a comfort) but aside from feeling a little puffed after climbing a few stairs to my hotel room and a slight headache the next morning (which could just as easily have been caused by the pisco sours), I didn’t notice any undue effects.

Tourists making the pilgrimmage to Machu Picchu spend on average two days in Cusco to acclimatise and to have a look around the Sacred Valley and fortress town of Ollantaytambo.

The history is gob smacking and such cool adobe architecture makes you wish you brought extra memory cards. There are markets selling rugs (I’m still gutted I didn’t buy one) and knick knacks (I bought a chess set with Inca and Spanish pieces – llamas for horses), art and handcrafts. I bought woollen finger puppets from this little girl who asked for a dollar and postcards from a boy who, when he found out I was from New Zealand, shouted “capital city Wellington!” That impressed me so I forked out another dollar.

Just arriving at Cusco airport where men in national costume played the pan flute while we waited for our luggage was a highlight. 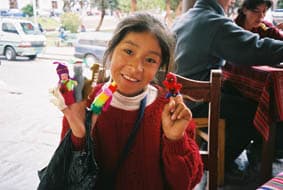 Evidence of the Spanish invasion is everywhere, even in the Cathedral of Cusco where there is a painting of the Last Supper by Marcos Zapata. Eleven of the disciples and Jesus are all depicted as lighter skinner Spaniards but Judas is darker and apparently Peruvian. There are other Peruvian and Spanish influences in the painting like the tableware and the view out the window, but my favourite was the meal they were all eating: roasted guinea pig – head, feet and all! In fact this is the national dish and is a delicacy. You’ll find it on the menu at many restaurants. I confess to not partaking, although probably would have if it wasn’t so expensive.

After a couple of days in Cusco you can start hiking the 4-day Inca Trail or take the train. I took the train. We left at 9am and rocked and rolled for an hour and a half from Ollyantaytambo, (the train had started in Cusco). It was the 4th that morning to Aguas Calientes, the town at the bottom of the mountain where hotels and markets thrive. Hotel porters met us and relieved us of our luggage right there on the tracks and we immediately boarded buses for the scary ride up the mountain road (several times having to back up 50m to let oncoming buses down).

Machu Picchu is breathtaking, and that’s not a pun due to the altitude. It was a typically misty day – this is rainforest after all. But every so often the clouds would clear and the sun would stream over this ancient city set on the side of the mountain. The stone work is incredible when you consider the size of these boulders and no machinery to split or lift them. I stayed the night in Aguas Calientas and came up again the next morning before the crowd just to stand in awe once more. 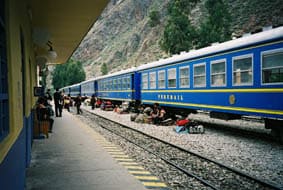 Buying wares from the train

About 1000 people per day clamber over these ruins which escaped the Spanish invasion. You’ll need to wear hiking boots – not the stilleto sling-backs a stupid blonde from Scandinavia was teetering around in, and I wouldn’t be surprised if sometime soon tourists have to be stopped as I was told these priceless ruins are slipping.