Berlin’s mayor Klaus Wowereit once referred to Berlin as “poor but sexy”, and the slogan sure suits her well!

The money trees may be a tad limp, but this city is blooming with colour, creativity, and a unique flair that you’re unlikely to find anywhere else in the world.

If you want a glimpse of the real Berlin vibe, I can suggest 2 public spaces that embody the spirit of this metropolis: a little bit rugged on the outside, but when you look a little bit closer, absolutely charming.

Once part of the Berlin Wall ‘Death Strip’ between East and West Berlin, Mauerpark (Wall Park) is now a slightly shabby grassy reserve that serves as a local hangout spot abuzz with activity all year round. During the spring and summer months, Mauerpark is packed with families, friends and dogs enjoying picnicking, playing basketball and watching the hordes of buskers.

Every Sunday come rain or shine, thousands of Berliners (and tourists in-the-know) flock to Mauerpark for the mammoth Flohmarkt am Mauerpark. On one side of the market space second-hand treasure (junk!) stalls offer everything from musical instruments, to kitchenware to faux fur coats. The other half is dedicated to local handcrafts, preserves, artwork and more. Of course, markets wouldn’t be complete without a means of sustenance – as well as the typical Berliner snacks such as currywurst and crepes; you can sample authentic Turkish cuisine, sushi and the delicious Sun Day Vegan Burgers.

Across from the market, every Sunday afternoon (Spring through to late Autumn) the concrete amphitheatre on the hillside of Mauerpark fills up for Bearpit Karaoke. This grassroots show has no cameras, no lights and no Ryan Seacrest, just Dublin-born Joe Hatchiban (a Berlin bike courier) with his humble battery-powered sound system and karaoke screen on the back of a bike. Budding performers get their few minutes of fame and whether goose bump-giving beautiful or dog-howling terrible, the crowds are always enthusiastic, cheering and laughing according to talent, surprise factor and dance moves, with sing-alongs a regular occurrence. The atmosphere is electric and you can’t help but get into it! It really is a must-see experience! 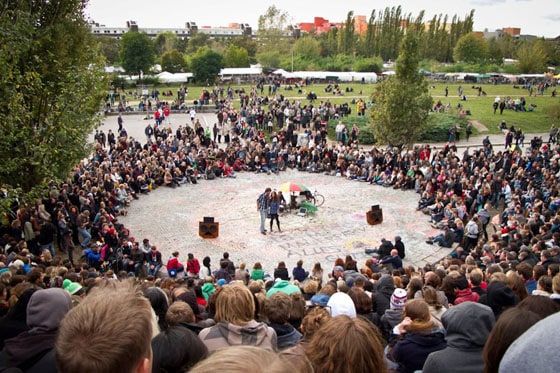 Tempelhof is an airfield-turned-park with its fair share of history, having been controlled by the Nazis, the Soviets and the US Military respectively, since opening as an airport in 1923. Oh, I bet these concourse walls could tell a few stories!

Once one of Europe’s top 3 airports, Tempelhof’s terminal building was given a make-over by the Nazis in the mid-1930s placing it among the world’s then top 20 largest buildings, at 1.2 km long. At the closing of WWII the Soviets gained control of Tempelhof, eventually handing it over to the US Army as part of the American occupation zone of Berlin. After the fall of the Berlin Wall, it resumed its duties as one of the city’s main airports until it was forced into retirement in 2008.

In true Berlin-style, the defunct airfield was not demolished and turned into apartments, but instead declared a city park and protected historical landmark. Tempelhof now wears the ‘largest public park in Berlin’ crown and is a popular spot for cyclists, rollerbladers and, would you believe, endangered flora and fauna?! There are daily tours of the preserved abandoned terminal buildings, which also hosts a number of international events including street fashion tradeshow Bread & Butter, and the Berlin Music Festival.