I’ve just had a ride on Singapore Airlines huge double-decker A380. From Singapore to London it was upstairs on the mother ship for me, along with 470 other passengers and about 900 pieces of luggage I’d say, judging by the conveyor belt at Heathrow. There are 3 classes on the A380: economy, business and a very swanky first class with individual suites. In fact it’s really a class above 1st.

Business class seats are wide enough for 2. Seriously, when walking PAST them to get to my seat in economy a couple were cosied up in one. I think that was just for the pre-launch aperitifs tho – the satay entrée and a Singapore Sling to chug back before take off.

These wide seats become flat beds by folding the back down over the seat, pulling out the duvet and arranging your TWO pillows just so. You need to sleep diagonally if you’re longer than 5′ 2″ putting your feet in a cubby area that when not set up as a bed is great for your handbag, book, laptop… there are loads of little cubby areas and very handy push open spaces for your bits and pieces. (How do I know so much, you ask? Because I was sitting up here on my way home!) 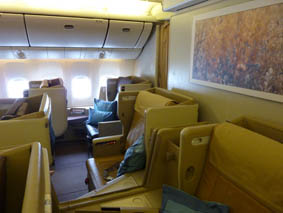 I had been told that the suites are so private I wouldn’t even be allowed a look…. but I not only weedled my way in, I played passenger and hostie with the crew on the layover at Singapore. These have the lie-flat seats/beds and you can close your door and become Do Not Disturbed. 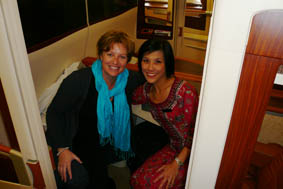 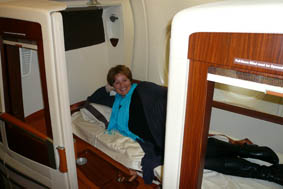 Economy Class is at the rear of the plane (about half of this big bird is business class) but with a curved stairwell between decks it makes for good exercise to de-DVT the legs. 2 loos upstairs for the back section and 2 at the bottom of the stairs, so nip up/down to see if they’re unoccupied. 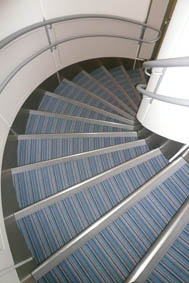 A380 stairwell. Your onboard gym!

The configuration in Economy is 2/4/2 so I am very happy with my window seat, for I have my own storage. Little bins run along between the seat and window and are big enough for a hangbag, laptop, the shoes I have replaced with slippers… The windows are also bigger and the A380 economy seats are wider than on any other plane I’ve been on. The back of the seat in front of me holds my movie screen where I can choose to watch any movie on demand, plus USB, ethernet and headphone ports so I could actually work on this screen instead of my own laptop. I’m hoping the ethernet port is a sign of internet to come… but in the meantime the USB allows me to keep my iPod charged. 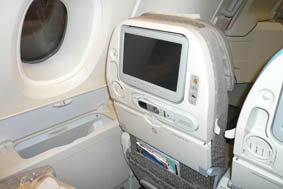 Menus are handed out in both classes as well as hot towels. Even the economy loo has amenities like toothbrushes, razors, moisturizers and sanitary necessities.

Flying back from London to Singapore, I nearly leapt across the counter to cuddle the lady who gave me an upgrade to Business Class. Gordon Ramsay is one of the famous chefs providing my dinner. Not that I’ve seen him, but I’m eating his panfried sea bass in vanilla veloute (read sauce), buttered spinach and melt in the mouth new potatoes. Done. Sadly he didn’t cook enough citrus flavoured French toast with strawberry salad and ricotta cheese for breakfast so I had fruit salad and a croissant instead. 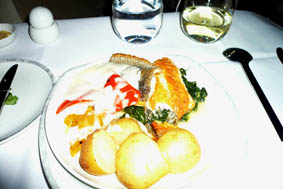 Looking around this enormous plane, you’d never know it was so huge. There’s a whole floor below me, but from where I’m sitting it looks just like the bungalow I came to Singapore on. Except it’s very new and swanky and has the best economy class of any other plane I know.

If you’re visiting Singapore, here’s a run down of some of the best bars to try. Click here for Singapore’s Best Bars >>>