It was 9.30am and the queue to get into the Colosseum was already long. Come 11 o’clock and it’ll be stretching around this gigantic masterpiece of engineering. And no one likes a queue. Especially one that last up to two hours (in the rain as it was today).

So here’s your tip: book your tickets online and zip right on past the crowds. Better yet, book a guided tour and you’ll learn all about the gory and money-hungry history of this place and how Russell Crowe didn’t portray gladiators quite right.

Check out tours of Rome with Viator.com >>

Spoiler alert: I’m going to tell you some quirky facts in these pics I took today at the Rome Colosseum. 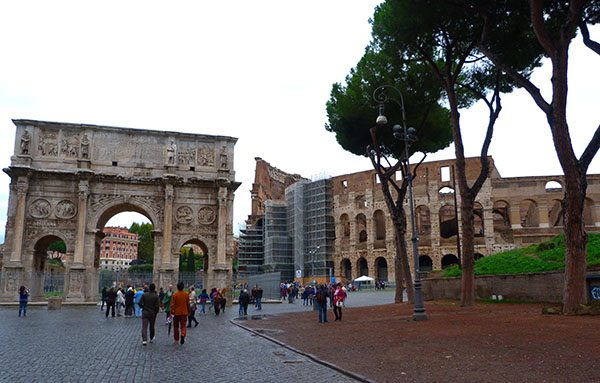 Getting here bright and early helps. Avoid 11am-3pm if you hate crowds! 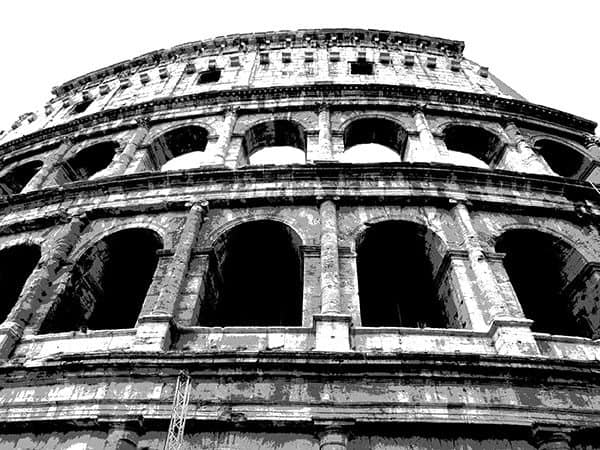 My black and white posterised version 🙂

Fascinating fact #1: the gates all have etched Roman numerals in the top and punters would be given numbered “tickets” printed on bone – which would be recycled (genius). These huge arched gates were called vomitoria, because, yes indeedy, they vomited the fans into the stadium! Our guide Paulo told us this. One cool reason to get a guided tour. 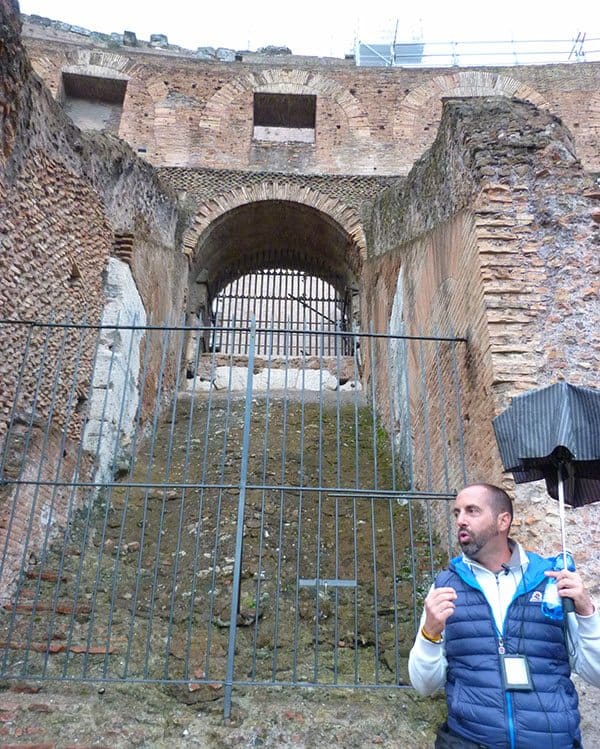 My panorama of the Colosseum looking over the gladiator pit

Fascinating fact #2: See how the wall is taller on one side than the other? I always thought that was part of the design, but no. Turns out that the local white marble that it was made of was highly sought after by architects and developers of the day, so they stole it. Apparently it turned up at St Peter’s Basilica!

You’ll also see a platform, or stage, covering half the pit. Underneath are the hidden chambers where wild animals would be let loose and pop up to fight gladiators from any little hatch. 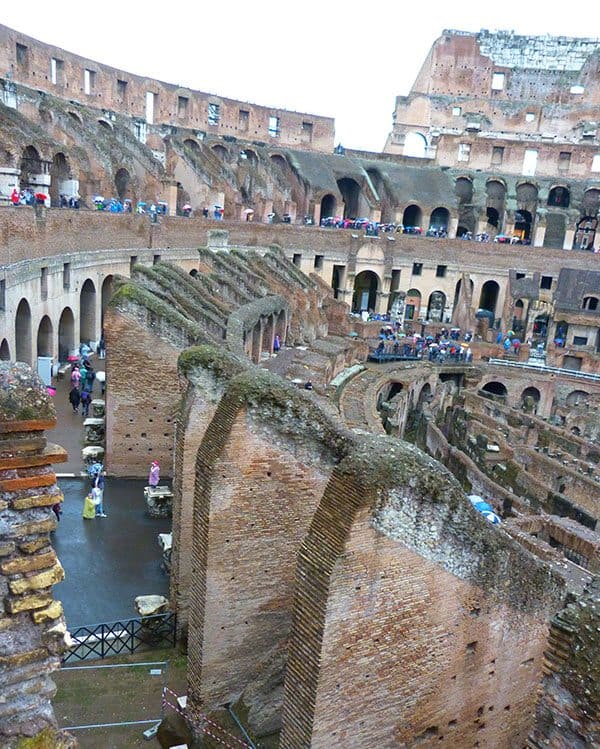 Where the lions would prowl

Fascinating fact #3: Gladiators were slaves forced to fight by their owners. Little guys were labourers and big guys were fighters to make their owners money.

BUT 60% of matches were fun, choreographed events. A bit like today’s ridiculous WWF. The fans knew this though, so there was no scamming. The remaining 40% were real matches, but 20% of those were illegally “negotiated” to end in a draw by the owners who didn’t want to lose a slave. So only 20% of the gladiator games were life and death fights.

AND the losing gladiator had one last chance to appeal to the crowd before he was put to death by sword at the throat. If the crowd gave the thumbs up, he lived. If thumbs down, he was killed right then and there. Gulp. 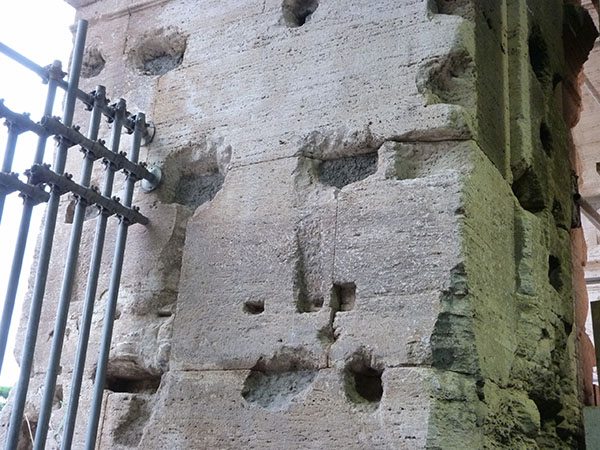 Fascinating fact #4: To build the Colosseum, engineers made holes in the rock and filled them with liquid iron which created nail-like pegs, then the lowered the next rock onto it. The holes in the rock are where the original iron pegs were over two millennia ago, but over the years have been stolen. 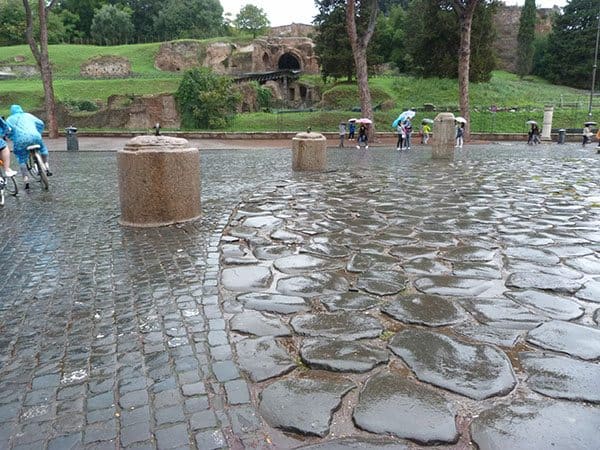 If these stones could talk…

Fascinating fact #5: The large stones on the right date back 2000 years to the time of Christ. The ones on the left are just youngsters at about 450 years. No fences. Walk on them. Jump on them. Kiss them if you wish. 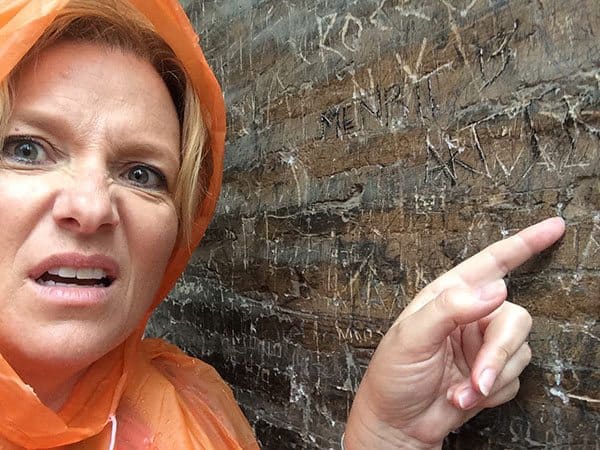 And finally: I was shocked at how much graffiti is etched into these walls. Remember the recent case about the American tourist who was fined $25,000? I guess they’re finally clamping down on it.

Check out tours of Rome with Viator.com >>

Great post! One of the best ways to see Colosseum is with a professional guide, and one of the best tours I have ever had was with More of Rome. The guide was amazing and the group was just 10 people.