Disney’s California Adventure has just opened its biggest ever expansion on 12 acres of former car parking. 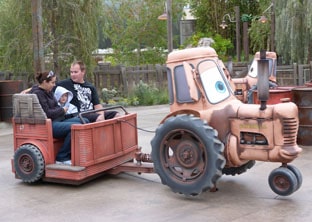 Buckle up and get ready for the hoe down!

Cars Land has been in the minds of the Imagineers – the guys and girls who are paid to dream this stuff up then put it into action, for 7 years. Plans were under way 5 years ago and this whole area of California Adventure beside Paradise Pier has been screened off and in the building phase for 3 years. It opened to media last night and I got to check it out.

There are 3 new rides, each quite different and employing clever geekdom. This one is Mater’s Junkyard Jamboree which is surprisingly fast when it whips your trailer round, but not too fast that little kids don’t love it.

Weird moment: Last night the guy who voices Mater in the movie, Larry the Cable Guy, was riding the ride he was also singing on. There are 7 original songs so you never know which one you’ll get until the ride starts and the baby tractors with their 2-person trailors swing round in figure 8s.

Get your do-see-do face on and press play!

Check out my blogs and videos of the other rides, Radiator Springs Racers and Luigi’s Flying Tires!