Vietnam is a visual and cultural feast for the eyes, the tastebuds, the memory and for history buffs it’s a fascinating glimpse into the scars of years of wars. But for today’s visitors, the war we all know about is the “Vietnam War”, which they call the “American War”.

In Ho Chi Minh (that the locals still call Saigon) an important place to visit, in my opinion, is to take a half day tour to the Cu Chi Tunnels; the maze of kilometres of underground tunnels the Viet Cong lived and got around in under the jungle during the war.

To give you a little overview, the Vietnam War started in 1955 and went for 20 years until 1975 across Vietnam. It was crippling for the country on many levels, not least the Agent Orange chemicals that were sprayed across swathes of jungle to ensure nothing would ever grow there again polluting the water and soil and killing the trees like Round Up. And we also know the devastating effects that had on the people of Vietnam (and also the allied forces) for generations afterwards. To get a harrowing insight into the war as a whole, a visit to the War Remnants Museum in Ho Chi Minh is sobering, but at the same, important to see it from a side we in the west have probably not seen before. 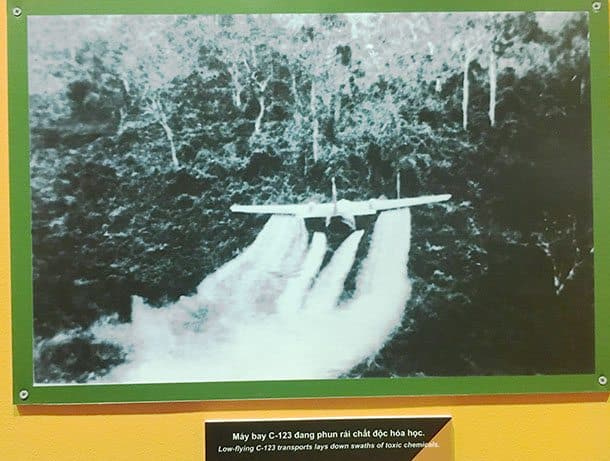 A plane sprays Agent Orange and other chemicals all over the jungle and the people living there. 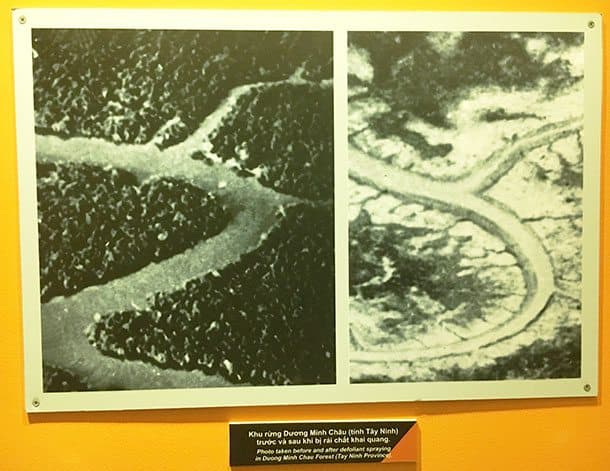 Before and After photos of Agent Orange destruction across Vietnam 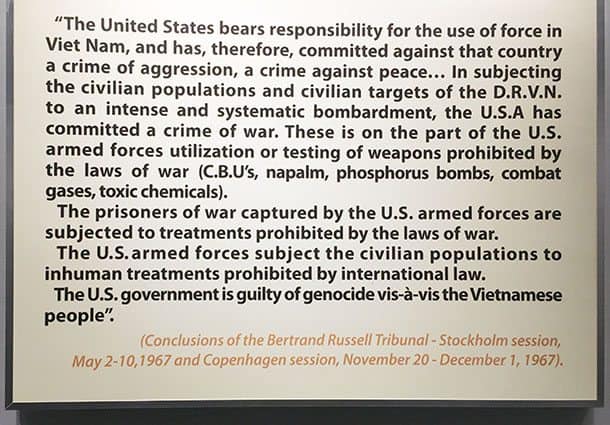 America is condemned in 1967 for war crimes in Vietnam

The Vietnam War was officially fought between the north and south Vietnamese governments, and the rest of the world got involved because the communists (supported by Russia and China) were seeking to take over the south like it did in Korea. The Viet Cong were a south Vietnamese communist front, also known as the National Liberation Front, and fought a guerilla war against their southern brothers, while the People’s Army of Vietnam (also known as the North Vietnamese Army, NVA) fought a more conventional war.

The US assisted South Vietnamese forces along with allies from Australia, South Korea and other non-communist countries.

Regardless of what side of the political fence you sit, the way this war was fought by the Viet Cong from tunnels with incredibly sneaky yet effective improvisations with rubber tyres and bomb fragments, are impressive.

The tunnels thread underground for 120km and provided essential supply routes for the Viet Cong, protected by trap doors hidden in the jungle. (Watch the video below of a man going into one). Today you can visit some of them and stand still for a moment imagining the scenes that took place here.

Cooking areas were funnelled so that smoke was filtered 10-20 metres away through tiny holes no larger than straws and only at dawn when the mist of the jungle would camouflage the smoke. 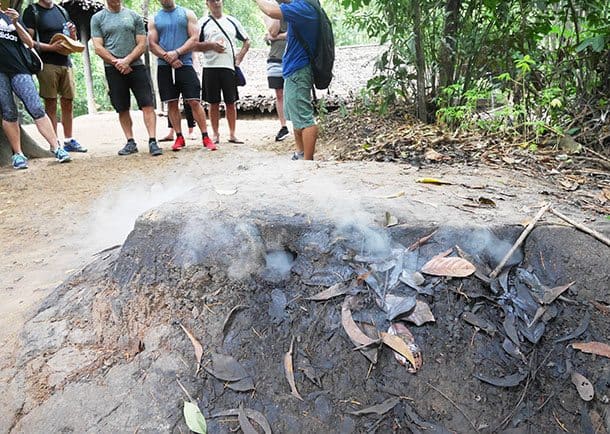 One of the hindrances the Allies faced was foot rot with months spent wading through boggy jungles. Not so the locals. They made sandals out of rubber tyres and even more cleverly, made the footprints appear to be tracking in the other direction by putting the narrow “heel” at the front of the foot and the wider “toe” at the back. 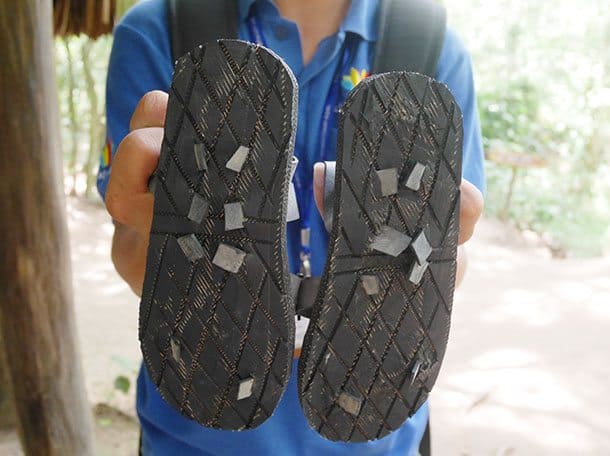 Backward facing sandals made of tyres

Hidden tunnel entrances were dotted among the trees – which of course are easily spotted today as pathways have been created for tourists, but just imagine how you’d find them in the 60s!

Below is a 15-second video of a staff member at the Cu Chi Tunnels lowering himself into – which you can too, if you’re skinny enough! Actually a normal sized Kiwi male got in and out. Not sure how he’d go if he decided to creep through underground to the next entrance though. Some tunnels have been “westernised” for the curious among us (read: widened!)

There is a shooting range here at the Cu Chi Tunnels too and disconcertingly you hear gun shots ricocheting through the jungle long before you come upon them. If that’s your thing, plan to fire a few rounds into some targets. If it’s not, move on quickly because it’s bloody loud!

Despite the Paris Peace Accord being signed in 1973, the war raged on and a global uprising of protesters around the world put enormous pressure on their governments. The Americans eventually pulled out in August 1973 and Saigon was captured by the communist north in 1975. The country was reunified as a communist nation in 1976 after around 3 million Vietnamese (including 2 million civilians) were killed, alongside many thousands from Cambodia and Laos, and 58,220 US military.

For those of us too young to remember, it was and should have been a civil war that the west had no business being in. The outcome testifies to that, but what you’ll learn when you visit Vietnam on a tour (as we did in my tour group of 10) with a local guide, was just how harsh it was under the former regime and why it seemed imperative at the time for international assistance.

All I can say is, a visit to the Cu Chi Tunnels is a must when you’re in Saigon, and make sure you take a guide who will open your eyes to their country’s history. 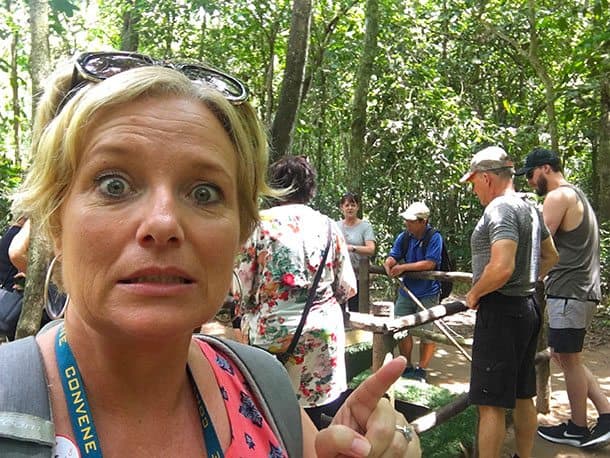 Watching a demonstration of those spikes! 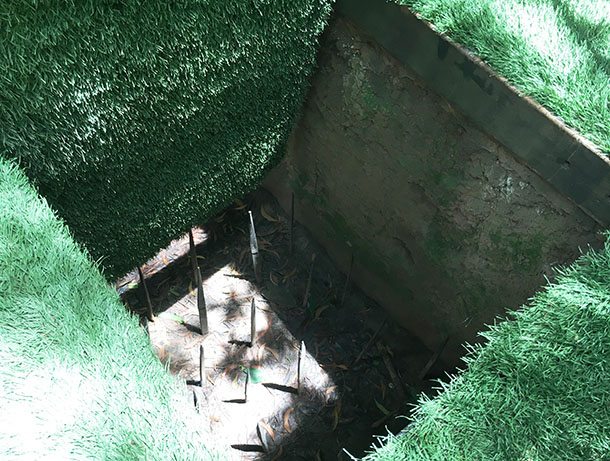 It takes about 1 hour 15 mins to travel to the Cu Chi Tunnels from Ho Chi Minh.

You can organise private tours that will pick you up from your hotel and include stops to visit some of the handicraft factories and lunch at a local restaurant. They start from $25 but you can also find ones that include a boat trip on the Mekong River, a cycle tour, a motorbike tour and private small group tours.

Check on Tripadvisor for the best reviewed tours here >>

The actual entrance fee is only about $6.

If you’re interested in more about Vietnam, read my post on why overnighting on Ha Long Bay is must here >>

Great blog with some fabulous information about Vietnam