I’m not going to lie, I wanted to be sick on my whale watching tour.

My husband did succumb to the swell (discretely in the bathroom), but I think every other passenger on board were oblivious to our predicament and handled the rolling deep admirably. 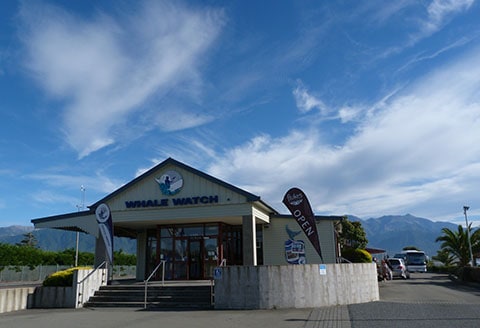 It’s a slick operation, Whale Watch Kaikoura. The throng of visitors was out the door at the ticket centre which doubles as a train station when we arrived for our 10am tour. Groups go out every half hour and once you get your ticket, you wait half an hour before you are called to watch the safety briefing video. Then out we filed, onto the bus and were driven about 10 minutes to the dock.

The average viewing experience is two sperm whales and the chances are extremely high you’ll also see dolphins, seals, albatross and other bird life. We saw four of these massive whales, up to 20 metres each (about as long as our boat) lying on the surface, blowing misty snot out of their blow hole. The whales only sit up here on the surface for about four minutes so it takes a keen eye to spot the spout in the distance and when they do, we’re herded back to our seats as Captain Dean floors it the kilometre or so to get there before they descend. 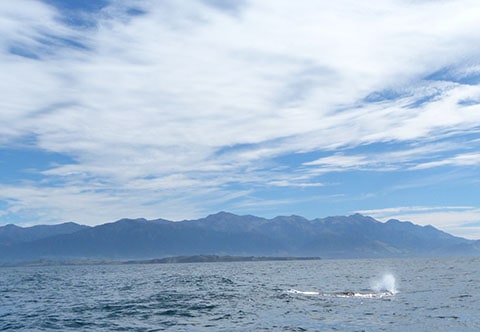 A sperm whale lies blows his nose on the surface, just half of him is exposed

The delightful Kayla was our guide and did a great job of keeping us informed and having fun doing it. Once these boys (it’s only males out here) descend they are down for 40-60 minutes looking for a snack. She is a bit of a whale whisperer, Kayla, able to tell at what point it’s taking one final breath before gracefully diving below – and when to click our cameras.

And speaking of snack, did you know that the mighty sperm whale is a predator of the great white shark and that they can swallow those bad boys whole?! They feed on squid, sharks and any other large fish that dares get too close. They have two sets of teeth in their monstrous heads – 20-30 pairs, each weighing 1kg and 20cm-30cm long, but with no upper teeth they only use them for holding onto their prey and fighting off other whales. I find this stuff fascinating! 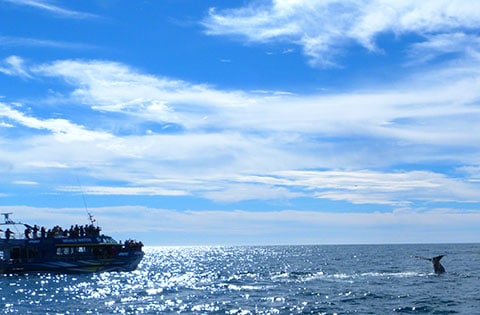 Then with an arch of his back, down he goes

You’ll find sperm whales off the Kaikoura coastline all year round as this unique piece of our country, the Kaikoura canyon, is a massive undersea mountain range with valleys up to 1600m deep and 5km wide within cooee of the shoreline, hence we get to see them.

Why is it called a sperm whale?

I’m glad you asked. It has a huge oil well inside its head (2.5 tons!) and it was believed that the white spermaceti oil was in fact sperm from its reproduction organs. However when they autopsied a female they found the same thing, but by then the name had stuck. (I paraphrase).

There is also a fur seal colony out here which our skipper took us to and on the way we were treated to some back flips from the cute Hectors and Dusky dolphins. 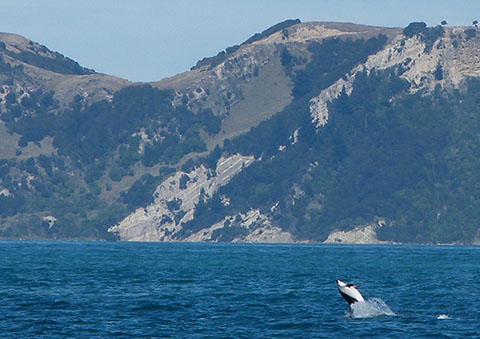 These back flipping Dusky dolphins show off for the cameras

You need to book your tour in advance on stunning days like today. Jump here for Kaikoura Whale Watch and all the info you need.