Who would have thought that teeny Tom Cruise is Irish? Apparently it is so, by golly, and the former heart throb (or is he still?) received his official certificate of Irishness by the deputy prime minister while he was in town to promote his latest movie Oblivion. 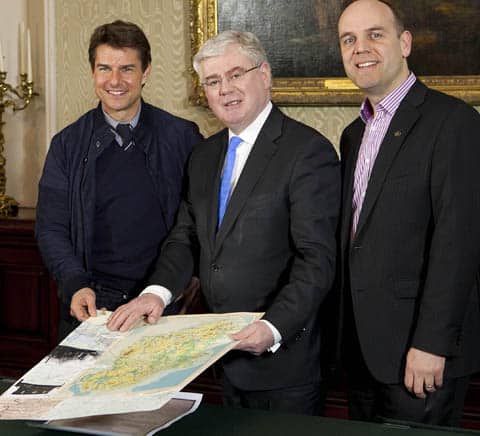 Is it just me or does he look like a wax version of himself? And what’s more, Cruise is his REAL surname! Who knew?

Research commissioned by Tourism Ireland for Cruise’s visit, and completed by genealogy researchers Eneclann, has unveiled an 800-year history of a family that contained knights in the 12th Century, rebels in the 17th Century and a hero, Patrick Russell-Cruise, who reinstated tenants on his lands in the 19th Century following their eviction against his wishes by an unscrupulous land-agent. Tom Cruise is a fifth generation direct descendant of Patrick Russell-Cruise.

2013 is the year of The Gathering Ireland, with a programme of over 300 clan gatherings and local history talks taking place throughout the year.