If you’re lucky enough to turn left at the galley on Air Tahiti Nui, this is what you can expect…

Business class (or poerava class) has four rows of six seats in a two-by-two configuration. They are not lie-flat seats but recline so far back that the person behind you in the window seat will struggle to go to the loo without waking you. Air Tahiti Nui also has one row of first class (6 seats), but as I haven’t played on these seats I’ll stick to business. 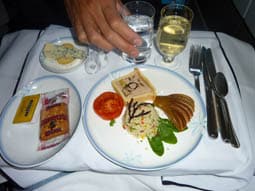 The crew have that gracious French-Polynesian way about them. No loud voices asking if you’d like a maitai or orange juice, just quiet individual service that makes you crane your ears and relax. And if you notice carefully, they change their uniform after take-off. The girls get rid of their turquoise suits and don colourful (and easy to move in) dresses printed with Tahitian flowers.

French, Tahitian and English are spoken so the safety demonstration can take a little longer, but immediately you know you’re heading somewhere exotic. I must say, having flown this airline now about five times, I really can’t fault it. 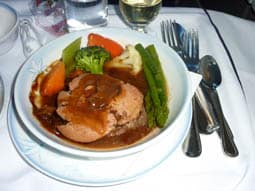 Steak with pate and mushroom sauce

Here’s what’s for dinner out of Auckland:

Hors d’oeuvres consisted of a choice of seared scallops in lemongrass curry with baby veges or chicken terrine and shiitake mushrooms, couscous and hummus.

Then some cheeses came round and I thought we were done, but no. A dessert cart was wheeled through laden with sorbets, lemon mousse, chocolate brownie, mini pavlova and fresh fruit. 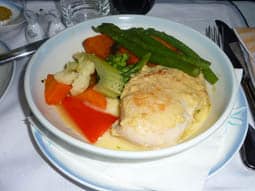 Less than 5 hours after leaving Auckland we landed at Papeete, which at 23 hours behind New Zealand meant we had Sunday all over again.

Three days later we left for the eight-hour flight to Los Angeles at 7am but this time I didn’t pinch the menu. I had a slice of hot quiche (the Bloke calls it bacon and egg pie) for breakfast and for lunch I had a delicious rack of lamb and lobster and shrimp bisque for him.

Air Tahiti Nui uses the newly refurbished Tom Bradley terminal at LAX and it was a breeze coming through customs, although do check the baggage carousel as the helpful staff at the airport were unloading bags and stacking them where we couldn’t see.