I’ve curated New Zealand’s most awesome and iconic annual events all in this one post for you to plan your visit around some of best and quirkiest things here. 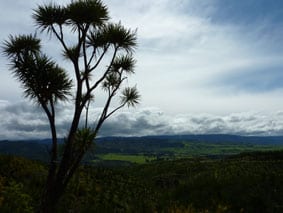 The schools have gone back after the summer holidays (about 2 months over Christmas) so you’ll find it easier to get accommodation and less likely to be swamped with other people’s loud and obnoxious children (because of course, yours aren’t) on the beaches, at the shops, in the pools…

It’s also the best month for summer weather. Not that it never gets REALLY hot here. A scorcher that would have everyone lying prone under an air conditioning unit (if they could find one. We’re not big on air conditioning either) is anything over 30˚C (around 86˚F).

January is technically our hottest month. July our coldest. March and April usually have very settled weather and are really lovely months to visit New Zealand, with mild temperatures that makes a day out and about exploring very pleasant.

But if you’re more interested in events than weather, here’s a calendar of New Zealand’s best annual events to help convince you to come on down: 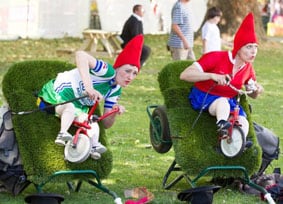 Perky and Fiddle at the World Buskers Festival

January and February see several outdoor concerts held all around the country. Some are in wineries, others in parks. Some are free to the public.

The World Buskers Festival is held in January in Christchurch. Expect crazy street buskers and amazing entertainers as well as musicians and of course, comedians!

Schools are still out so it’s a busy time for holiday locations, beaches and public pools! 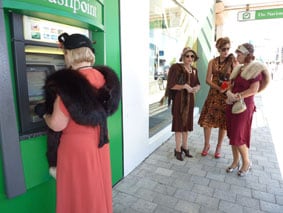 Art Deco ladies in the electronic age in Napier

The Mission Concert features an iconic 70s, 80s or 90s singer (we’ve had Rod Stewart, Sting, Tom Jones…) at a winery in Napier. It attracts around 25,000 with picnics in their natural amphitheatre setting. (There was no concert in 2015)

Read my Complete Guide to the Mission Concert here >>

Food and wine festivals are also held in Marlborough and Hawkes Bay in February.

The world famous Art Deco Weekend is held in Napier in February where thousands dress up in 1930s garb, bring their old cars and attend events that run from dinners to dances, lunches on the main street and plenty of music events. 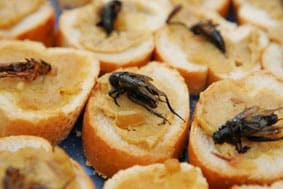 The most iconic event in March would be the freaky Hokitika Wild Foods Festival. Don’t come if you have a precious stomach because the offerings will consist of horse semen shots to fried grubs.

Pasifika Festival is held in Auckland in March packed with thousands of our Pacific Island cousins performing, selling their food and crafts and there’s plenty of music and atmosphere.

Iron Man New Zealand is held in Taupo in early March for extremists. It attracts athletes from all over the world.

Balloons over Waikato would be my pick for an event in April. You’d need to be early bird though to see these beautiful and strange hot air balloons fill the dawn sky of the Waikato. 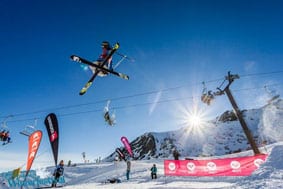 Bluff oysters are all any one talks about in May. Bluff is located at the bottom of the South Island, but if you’re an oyster lover, this is one place you must come to. Each May they hold the Bluff Oyster Festival so you can enjoy them baked in a pie, in a gumbo, battered or – in the buff.

Now we’re getting into deepest winter and Queenstown celebrates the snowy chill with the annual Queenstown Winter Festival. This is a crazy, high energy week of music, dance, birdman and even a bit of skiing. 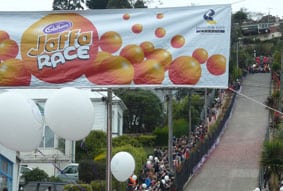 July sees the south needing something to help them through the drudgery of long winter days so what better way to do that than throw a Chocolate Festival?!

The Cadbury Factory is now closed Dunedin but the whole city would get into the festival adding chocolate to everything from chocolate facials to bars of goodness being handed out at pubs and even a chocolate fondue for the kids in the Museum.

The highlight was the Jaffa Race (see my video here) where 100,000 chocolate balls (about half the size of a golf ball) rolled down Baldwin Street – the steepest street in the world. It was chaos, hilarious and each ball is sponsored with the proceeds going to charity.

The good news is that while the factory might be closed, the website above says to stand by for something new… I shall update this post when I hear what that is. 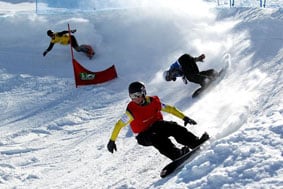 Wellington springs into masticating delight with Visa Wellington on a Plate. All the restaurants (well, 109 of them last time) get onboard to showcase their cuisine for 2 weeks.

There are special meals and deals in leading restaurants, competitions between chefs. And in amongst all that is Beervana, a beer festival of boutique brewers with some even matching menus to the hops.

Winter Games NZ is the largest winter sporting event outside of the Winter Olympics attracting hard core competitors from 36 countries over 2 weeks. They perform stunts on snowboards, cross country skiing, curling and off-mountain events are also happening in venues around Queenstown and Lake Wanaka. 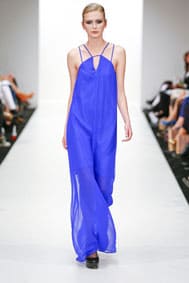 The World of Wearable Arts shows in Wellington sell out as soon as the tickets are released for this quirky, original and so so clever fashion show (with a difference). Designers from New Zealand and around the world compete in various clothing categories with the craziest creations you’ve ever seen as part of a huge extravaganza.

New Zealand Fashion Week in Auckland has nothing to do with the above event. This one is a week of New Zealand fashion designers showcasing their next season’s range on the catwalk to local and international media and buyers. The shows are all ticketed so you can see your favourite designers, or take a lucky dip and check out someone you haven’t heard of before.

Now that winter is over it’s time to pull on your running shoes and join the Auckland Marathon. Me, I’ll be having brunch with friends and leaving those mad people to it.

Read my post on the world’s best marathons here >>

The Lake Taupo Cycle Challenge really is just that. 160km on your backside on a bike seat around the lake. You can do it in a team or solo – and then go for a soak in De Brett’s mineral hot pools afterwards! You can also do a half (80km) or in a relay team. 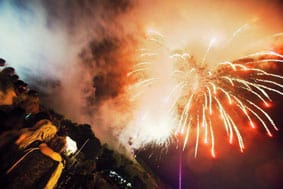 It’s all about music in December.

New Year’s Eve is probably the biggest and you can take your pick of locations. The biggest is probably Rhythm and Vines (29-31 December) in Gisborne (the first place on earth to see the sun rise). There are several stages and accommodation is in tents.

Sister event Rhythm and Alps is held in the South Island over the same dates, plus winery music tours, free concerts and movies in parks and more music festivals.

And How to see the South Island, breaking down each region into how many days to spend there >>