This story was originally published in the Herald on Sunday on Harry Potter’s new Wizarding World, that opened at Universal Studios Orlando in 2010. It has won Megan Singleton the US Travel Association Travel Writer’s Award 2011. Woot!!

Hold on to your broomsticks, Harry Potter fans – the formerly top-secret boy-wizard theme park at Universal Studios in Orlando, Florida, has thrown open its gates. 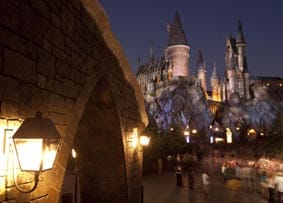 Enter the mind of JK Rowling

The Wizarding World of Harry Potter – opened officially on June 18 to tens of thousands of fans – brings J.K. Rowling’s wizardly universe to life, complete with a rollercoaster ride through a quidditch match, shops for wand purchasing and a pub serving sweet butter beer.

I visited as part of a group treated to a sneak preview and let me tell you, wandering among the snow-capped buildings of Hogsmeade was surreal – so much so it took a moment to realise the moon wasn’t just another prop.

No expense has been spared on this two-year project, designed at least in part by Academy award-winning production designer Stuart Craig, who has worked on all the Harry Potter film sets. No cameras were allowed in during our preview visit and yet – as if by magic – plenty of images still ended up on Twitter that night (not mine).

So secretive has this new attraction been that even Universal staff were not permitted to peek behind the fence while the park was under construction.

The new park is housed within Universal’s Island of Adventure; just walk past the Dr Seuss attraction and head all the way to the back of the park; hey presto you’re in Hogsmeade as quick as if you’d taken a portkey – almost.

The Hogwarts Express blows its whistle and a load of steam as you walk through the gate, and suddenly you have stepped into J.K. Rowling’s imagination. 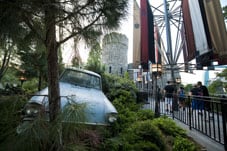 Pass the Womping Willow on your way to the Dragon Challenge

The shops are replicas of those in the movies, including the Hogshead pub which was designed for the park before its appearance in the Half Blood Prince and was remade to match the film version. You can even sit and enjoy a pint of a Hogshead brew – which I did, and it was good – though as far as I could tell it could have been a Bud Light.

Meanwhile, over at the Three Broomsticks you can sample the famous butter beer or pumpkin juice. I tasted treacle fudge at Honeydukes (delicious) and avoided Bertie Bott’s Every-Flavour Beans lest I get a garlic. Zonko’s Joke Shop was packed floor-to-ceiling with wooden shelves of tricks and gags, some from the movies (like extendable ears, boxing telescopes and sneakscopes) and other general magic tricks and games you’d find in regular muggle shops.

Over at Owl Post people queued to send letters with a certified Hogsmeade postmark and to buy wands, also available over at Ollivanders where they are stacked higgledy-piggledy in boxes from floor to ceiling. They come in all shapes, size and colours, straight and crooked, all different and ranging in price from US$24-$45 ($33-$63).

Further up the road is Dervish and Banges, selling young wizards all manner of magical instruments and equipment, plus all the essential Quidditch equipment, triwizard apparel, spectrespecs and remembralls.

The main attraction of the park is a wild rollercoaster ride through Hogwarts School – Harry Potter and the Forbidden Journey, which includes a trip through the floo network, a dragon attack, dementors, a quidditch match and a close encounter with the whomping willow. The former Duelling Dragons rollercoaster that was already here has morphed into the Dragon Challenge, and its path takes you past the whomping willow – which has the Weasley’s charmed Anglia lying in the middle of it. One dragon on the ride, I was told, is faster but the other has more twists so you can take your pick. I chose speed over twists and was still gasping for breath some time later – thank goodness for that calming Hogshead brew.

There’s also a tamer ride called Flight of the Hippogriff, which is pretty much a train gliding around tracks simulating a hippogriff training flight.

Universal Studios in Orlando sprawls over 12ha and includes two theme parks and three on-site hotels. There’s much more here than just Harry. Once Hogwarts and Hogsmeade have worked their magic try The Simpsons ride, the Revenge of the Mummy ride, The Incredible Hulk Coaster and The Amazing Adventures of Spider-Man ride.

But, for the moment, you do get the feeling that Harry Potter is the only superhero anybody’s really interested in around here.

See the story on the NZ Herald website here >>>