It was every media for him(her)self today as a couple of hundred journalists descended upon the engineering hangar jostling for position for the big reveal of Air New Zealand’s new Hobbit 777-300.

Here she is, in all her Hobbitty glory 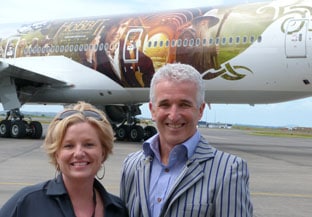 Me and Rob pose with the Hobbit plane

Outgoing CEO Rob Fyfe was happy to pose for a pic with me in front of the world’s biggest decal ever to be stuck on a plane. At 830 sq metres this is a piece of “spectacular artwork,” said Rob to the hob nobbing media sipping Saturday morning bubbles.

This aircraft will leave tonight for LA, go on to London spreading some Middle Earth love around the world, then return in time for the premiere on Wednesday.

Air New Zealand is unapologetic for its partnership with Peter Jackson, Weta Worskshop and Warner Brothers (despite criticism from the New York Times!) and even features Sir Peter and Gollum in its latest safety briefing video (see it below).

I think it’s genius and why wouldn’t you use something as successful as the Lord of the Rings and the Hobbit if the opportunity arose? Besides, has anyone checked what Visit Britain have spent on promoting themselves around Skyfall? Exactly.

A 2nd, slightly smaller, aircraft will be pimped up in Hobbit imagery to fly from November 2013, but for now, the team who worked hard on creating this world-first are basking in some Hobbitty glory.

Here’s Air NZ’s latest Hobbit safety briefing if you are one of the 3 people in the world who hasn’t seen it yet. They spent 3 days and nights shooting it and in 3 weeks it has had over 10 million views: