Between the Pacific Ocean and the Indian Ocean, there’s an awful lot of desert! The sand is every colour of red, orange, umber and terracotta you could possibly imagine. There are also a lot of mining towns, as the mining industry stirs such a large part of the Australian economy. In between the mining towns are vast cattle stations, full of jackeroos – interesting and colourful characters that bring Australia to life.

Everywhere the Indian Pacific stops, you’re treated to the wild side of Australia, but perhaps nowhere as much as in Kalgoorlie, the true wild west of Australia and a place where the brothel district is on the tour itinerary! 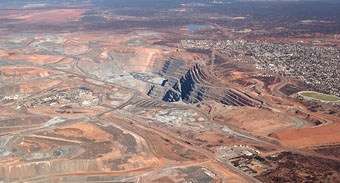 It’s hard to know what Kalgoorlie is more famous for – the colossal Super Pit (an enormous mine that runs 24 hours a day and is the centre of life in the busy township), the extraordinary pub to citizen ratio (some 25+ pubs for a population of approx. 27,000) or the scandalous tales of murder, brothels, blackmail, mischief and mayhem that the locals are all too keen to share! And why, you might ask? Well it’s simple really – Kalgoorlie is a gold-mining town, home to what some people have called the richest square mile on earth, right where the town’s founders made their original claim and it’s prone to a little mayhem!

First up we took a ‘Whistlestop Tour’ (booked on board the train) that careened us through the main street, around some of the key sites in the town’s history and stopped off at the Super Pit so we could see one of the largest open-cut gold mines in Australia for ourselves. The size of the machinery involved is breathtaking – as was our female bus driver who moonlights as a lorry driver in the mine herself. The tour included spots where local police were murdered by publicans, miners trying to get away with stealing gold met their downfall, as well as infamous pubs that remain boarded up or abandoned. Throw in the magical Afghan influenced architecture, wide streets originally made for camel trains and you’re transported to a rugged, other world.

There’s plenty to Kalgoorlie – it’s also home to some remarkable engineering feats, but that’s nowhere near as interesting as its history of brothels and prostitution. The tour also included a run down infamous Hay St, where all the brothels were moved as part of trying to clean up the town. Now, one of the original brothels is actually a museum to the town’s sordid history and the industry is actually suffering a bit of a downturn. Our time in Kalgoorlie signals that we are drawing close to the end of an epic journey across Australia by sumptuous train travel.

But if there’s a place amongst all the others I would happily spend a weekend, it’s got to be this wild west town.

Once back on the train, we’re giggling and laughing at our excursion to the wild side, which is about to be brought into stark contrast with arrival into sunny Perth the next morning. It’s one more night to sleep with the gentle rocking of the carriage lulling me to slumber. Had I realized exactly how beautiful Perth was going to be, I’m not sure I would’ve got a wink of sleep. The final clackety-clack of our train journey leads us back through picture-perfect suburbia under glorious blue skies before pulling up to the station. 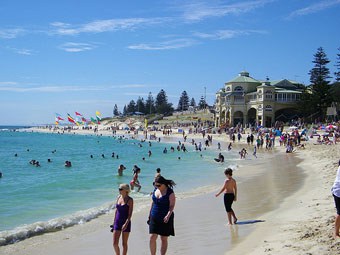 We took advantage of the amazing weather to get the most out of Perth, heading to well-known (according to the locals) beach hotspot Cottesloe just 15mins from the CBD, where I get to touch my toes into the waters of the Indian Ocean. It’s quite an enormous sense of achievement, although certainly I just hopped onboard the train, to have traversed such a huge country quite differently to how most people travel it. I’m thoroughly converted to train travel once and for all and wouldn’t mind a few more days to enjoy Perth, especially as there are dolphins currently playing in front of me and I’m drinking a glass of sparkling rose. Bliss!

• If the bus tour isn’t your thing, you can walk straight up the main street from the train station, but you’ll need some time.

• Definitely consider an extra night in Perth, rather than rushing to the airport. A cab to Cottesloe cost $30 from downtown, we were rushing for time but there are other transport options available.