In case you’ve been thinking my blogs have been a bit too girly of late, this one’s for the blokes…

I got up nice and early at Peppers Anchorage in Port Stephens and went parasailing over Nelson bay with Port Stephens Parasailing. I haven’t done this before. Such a cool experience (especially as I had no jacket and was freezing). Up there at 150m above the water I was keenly trying to spot dolphins and whales. The former are here all the time, but this morning they must have been sleeping somewhere else. It was gorgeous and quiet just dangling in mid-air but I did imagine what I’d do should the rope connecting me to the boat snap… When I was safely back onboard and said how I had imagined floating off into the distance, they did confess that it does happen about once a season. Gulp. Glad it wasn’t on my watch cos I’d elected for the non-dunk option.

I warmed up with a latte at one of the cafes on the dock then headed off to Stockton Beach to do some quad biking on the sand dunes. We met at the carpark where the lads had loaded up a dozen little 90cc bikes on a trailer behind a 4WD and off we bounced for 40 minutes to get out of protected beach land and into the permitted race track area. On the way we stopped at Tin City. This is a bizarre enclave of corrugated iron buildings that folks have been living in for decades. You may remember this pub from Mel Gibson’s Mad Max movie. They catch their own fish and pump water from a natural spring – but they do have their priorties in order, satellite dishes are attached to the roofs. 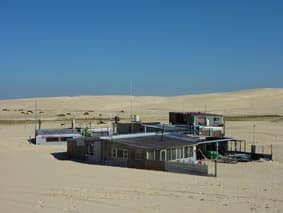 Fancy a holiday in Tin City?

A little further along and we arrived at the race track. Well more like a big hilly part of the sand dunes where we are officially allowed to roar at full (40kph) throttle. Awesomely it’s in the flight path of Williamtown – the RAAF’s military base and fighter jets scream overhead. You’d think you’re in the Middle East with sand dunes as far as you can see and these planes that use $10,000 worth of fuel per hour just in training doing aerial donuts. But as Matt and Christian unloaded the bikes, handed out helmets with flames painted on the sides and gave us the rules, they also mentioned they’d seen a white pointer swimming just over there where the waves were crashing. That brought me back to Australia with a thud.

They set up a 1.5km circuit for us to practice zooming round on – full throttle on your way up the dune or you will get stuck and have to return to the bottom to try again. In fact the trick is to full throttle it down the side of the previous dune to ensure enough speed. After a couple of warm up laps I was zooming as fast as the blokes. Although not trying to deliberately can off like they were…

Then off we went in a single file behind Matt about 3.5 kms to the Sygna ship wreck which lies rusty and broken on the beach.

The dunes shift all the time and Matt did say he went whizzing over the side of one once as his followers stopped to watch. Since he’d been a few days earlier it had developed a 2m drop. The changing sands are a bit of a menace in fact, slowly swallowing up the trees as it creeps 3m inland each year. There is a mining business set up here too and 3 ship loads each year are sent off to Waikiki to carpet their beaches. I’m surprised Hawaii doesn’t make more of that – they love all things Australian! 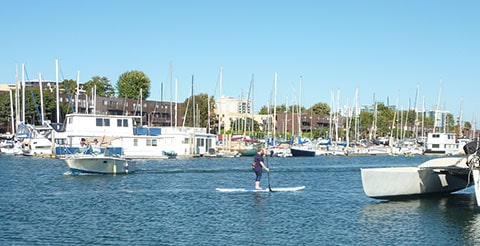 Give it a rev!

For the full comprehensive guide to Aussie, check out Australia.com.