I’ll “recalulate” you! I wanted to shout at the posh voice coming from the GPS stuck on my windscreen. My flight from Auckland to Sydney in the front seat of Qantas (yesss!) was a good one (and not the 7am red-eye either so I not too bleary for driving). Because of my up-front status I had an ‘express’ card which meant I slipped through customs and immigration like a fart. So far so good.

Aside: It’s always funny when the Arrival doors open and you are suddenly standing in front of a sea of greeters with signs and you know no-one is interested in you. It’s times like that I think about running up to someone and giving them a hug. However, with great restraint I headed to the Avis counter, signed the appropriate docs, got my trusty GPS and found the sensible 4-door family sedan that was waiting for me. I was heading north to Port Stephens – about a 2.5 hour drive – and with a little assistance from the nice Avis man, plugged in the first address – Oakvale Farm at Salt Ash.

However (nothing ever goes according to plan – just ask my family!) unbeknown to me the GPS had frozen up so I tootled merrily (actually looking left and right and left again like that terrible intersection crash ad) but with no GPS signal on my entire round of Sydney airport, I pulled in to discuss the matter with the local taxi drivers. Oh no worries, they said in thick Indian accents. It’s always like that here, it’ll come on soon. So off I went. 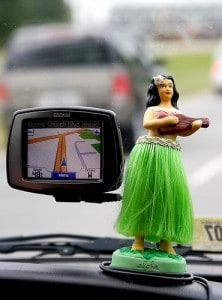 When all else fails trust the hula girl

It didn’t come on at all and when the print out I had brought with me said the domestic terminals should be on my left and they were on my right and that I should follow signs to the Harbour and Tunnels but I could only see City and Botany I pulled into a garage to discuss the matter again and beat the GPS senseless. Fortunately an angel disguised as a burly Road Side Assist man filling his ute up with petrol knew how to pop the cover off the posh woman and reset, pointed me towards Botany (that is north, FYI) and after a few “recalculatings” due to one-way streets, I was whizzing along like a local.

Oh, another Sydney-driving thing to beware of is tolls. I had prepurchased an e-tag which meant I could scream through the e tolls and would be charged later. If not, you would have to pay by phone or sometimes there are toll booths that take cash.

Anyhoo, me and my posh friend soon got along fine and with cruise control at 110 (you’re allowed to go 110 here!) we arrived at Oakvale farm where joeys in pouches and baby koalas awaited…

For the full comprehensive guide to Aussie, check out Australia.com.