Commodore Frank Bainimarama’s gated compound and sleeping guard was a highlight of my visit to Suva. I’m not sure if I’m allowed to say that, (and before anyone goes to shoot the guard for sleeping on the job, I’m sure I’m using artistic licence!) but here’s what I can say – the locals and ex-pats alike think he’s doing a great job. 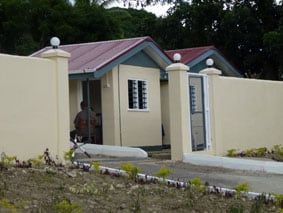 There are a few kiwis (you know who you are) who are boycotting Fiji for holidays due to the current military regime. Me, I’m whizzing through on Air Pacific to the United States, although stopping for two nights for a bit of R&R before the hectic task of shopping and driving the Pacific Coast Highway from LA to San Francisco.

This is what they say in Fiji about the current military leader: Frank Bainimarama is routing corruption, pulling the country in line with the rest of the civilised world and needs a chance to get the job done. Fijians are used to strong leaders, so while the rest of the democratic West hop up and down, the locals understand what he’s trying to do and by and large co-operate as they work towards a new Fiji. 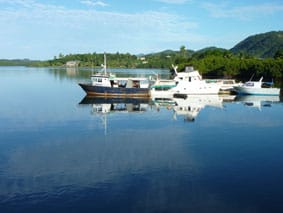 View from my room at the Novotel, Suva

Ok. Politics aside, The reason I flew direct from Auckland to Suva was to meet and interview the owner and founder of Pure Fiji – the divine spa products created and manufactured here by Gaetane Austin, her daughter Andree and a team of 100 in the factory at Suva. (Here’s my post about my crazy meke at Pure Fiji.) Sadly the 60-something matriarch had just taken a fall hours before I arrived (she’s ok) but I did get to sit down and chin wag with Andree – and have a crazy foot spa ritual which was at once hilarious and wonderful. 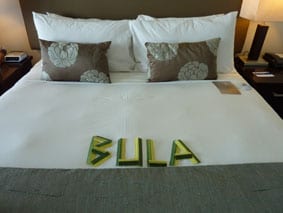 Bula to you too!

I’m travelling with my cousin, who I will call Louise. I’m Thelma, for the purposes of this driving holiday. We stayed at the Novotel in Suva. It’s deceptively plain from the road, but drive down to reception and wander through the open-air lobby/bar/restaurant right on the edge of a mill-pond calm ocean, and it’s a little slice of heaven.

Suva is the more cosmopolitan town in Fiji – the business hub and centre of government. It has a really great cinema, loads of interesting restaurants, eclectic markets selling fresh produce and bric-a-brac. But mostly the tourists by-pass Suva and fly into Nadi to stay on Denarau island. (More about that next including the jazz festival and the amazing Sofitel.)