Well there’s a title I didn’t ever imagine writing. But it’s true. I just ate Scary Spice’s cupcake and this is how it happened…

So there we are sitting in Row B at the Perth Fashion Festival for the opening night shows and who is the celebrity of the minute here in Perth? You got it. Melanie Brown, aka Mel B, aka Scary Spice. Flown in especially to look at the underfed models.

Giddily for us, the British bomb shell is sitting right in front of me. And just as my colleagues and I had been whining about Row A having goodie bags AND cupcakes, but we only got the goodie bags, Ms B sits down in her skin tight black dress, boobs harnessed in so she must have been barely able to breathe and brown hair extensions to the right. She turns around, when she hears our banter and her man of the moment (aka husband) offers his to one of us while the rest of our nostrils flare. So Scary, who was clearly quite scared of our cupcake envy, also handed over. 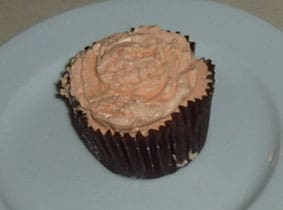 Jenny Craig would not approve

The first one in our party politely declined. A celebrity should be able to keep her cupcake. However I disagreed and kept my eyes on it like a hawk on roadkill. She turned again, this time to the next one and said she didn’t need it. (Clearly I did). Finally her man takes it off her (he is very useful) and passes it along to me. I gasped. I had Mel B’s cupcake in my hand. I now have Mel B’s cupcake in my tummy.

Oh and the show…

We saw Yeojin Bae, one of Australia’s hottest designers, with her drapey reds and blues. She had her own show.

Then the second event tonight, held in the West Australia Museum, were collections from 3 designers: Little Gracie, Lisa Marjanovich and Paper Skye. Lisa was my fave. Colours for all three were nudes, white and pastels. Lots of floaty, some flowers and loads of drapey (for wearing after too many cupcakes) and the obviously too cool for me to understand, white nana pants through sheer fabrics.

Check out my little video vinette of Paper Skye and see if you can spot the celebrity that Perth is all atwitter about today.