When I started out as a travel writer, I was young and naive and thought up the most unlikely subjects for my stories. (Actually I still do!) And when I look back over the years I think that more often than not, the more audacious my request, the more likely it was to succeed. There’s a lesson in that too.

So here is the story of my “undercover assignment” at Pret A Manger, quite possibly London’s best sandwich shops, all in the name of telling a yarn… 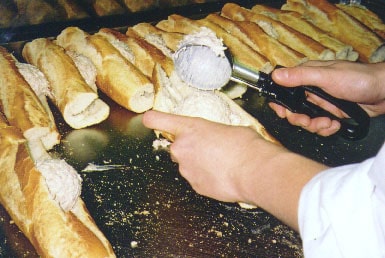 Me on the mayo. It’s harder than it looks!

The fight for sandwich supremacy is on in London, and lunches have never been the same since Pret A Manger first put a star over its door in 1986.

Born out of disgust for the greasy bacon butties and curled white bread on offer in the mid-eighties, co-founders Julian Metcalfe and Sinclair Beecham opened their own brand of designer sarnies. Their mission statement is “Passionate about Food” but Pret’s phenomenal success is due as much to team relationships as its reputation for great food.

So after a schmoozy lunch with the Pret PR girl featuring crayfish and rocket sandwiches, sushi, chocolate brownies (the recipe has been perfected 33 times) and yogurt drinks, we hatched a scheme that I would go undercover for a morning as a trainee sandwich maker. 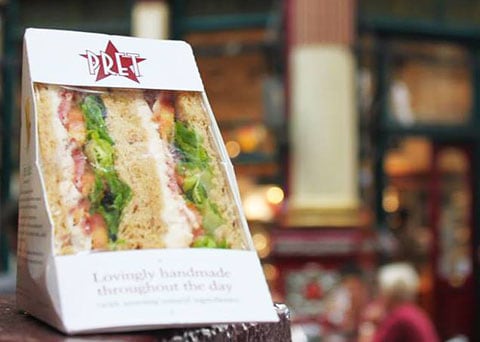 First I needed a pair of jeans. Apparently this is not just the look, but a sensible fabric to protect me in the likely chance I would spill anything hot. Black leather shoes were the next requirement. These would protect my feet from wayward knives and other implements. I went shopping at once.

I was not allowed to wear perfume, makeup or jewellery and at that point nearly told her to forget it; I’d write the story from press releases. But instead I set my alarm and staggered in at 6.45am for the Friday morning Team Brief looking like I’d come from a sleepover with eyes like piss-holes in the snow (so my friend so eloquently told me). 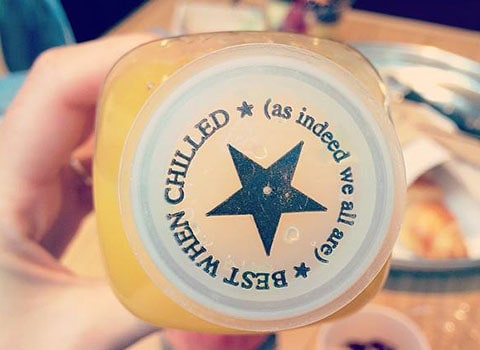 Every member of the Pret team, including Head Office staff, spends their first two weeks learning the ropes in one of the stores. They are, therefore, very good at training new comers like me.

Fresh ingredients are delivered to each of the 335 stores, most in the UK, each morning and every sandwich is handmade on the premises.

They are young and hip and seldom is English their first language. Wearing a white shirt emblazoned with the company star, a fetching blue hairnet , cap, apron, and a cool bandana for my neck, Anyo, the Team Leader, assigned me to work with Cari on Table 7. She had been in London about four months from Spain. But it wasn’t her accent that made it hard to keep up; the blaring house music they were gyrating to in the kitchen was loud enough to be a live concert.

We cut French sticks to regulation size, as measured on our recipe card, and I dolloped a scoop of tuna/mayo into the middle which she deftly spread with a fork. My next job was to put five pieces of perfect cucumber slices into each one. By perfect, she meant the skin must join all the way round otherwise it gets tossed aside.

“Oh come on,” I shouted as she pulled out a piece that wasn’t quite round. “This is so close, no one will know if I wedge it into the tuna.”

“It must be perfect,” she gesticulated over the noise, and I sorted through the container for replacement pieces. 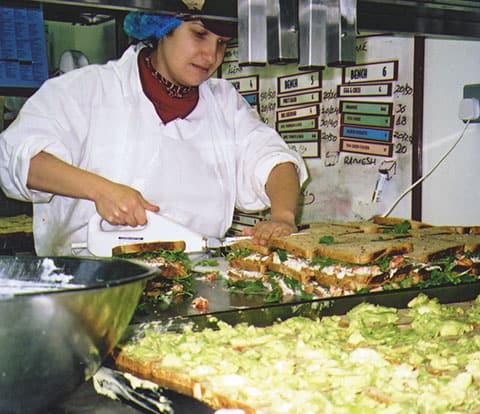 Hard at work while I twirl in circles wondering what to do next!

At the same time, the monumental All Day Breakfast sandwich with free-range eggs, bacon, sausage and salad was being created on Table 5. Roasted capsicum and avocado on Table 3 and an array of other delights were churning out all around me. The speed was astonishing and I slowed Cari down so much I had to be re-assigned so she could get her smoked salmon baguettes onto the shelves by 9am.

My next job should have been simple: putting the cut sandwiches into triangular boxes and aligning a sticky label to secure the lid. This, however, was like the Generation Game as the filling kept falling out, requiring the sandwich to be reassembled. In the end I offered to keep on top of the dishes and did quite well at that. 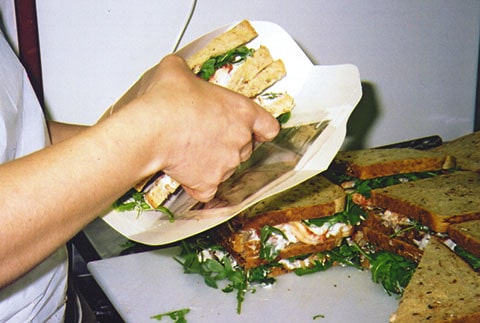 You have no idea!

After each variety was taken into the shop, we wiped down our surfaces with disinfectant (another thing I was good at), washed our hands using our knees to turn the water on, and walked back holding our arms up like a surgeon who has just “scrubbed in”.

Finally after a couple of hours I was rescued from sandwich oblivion and donned a barista apron to join the boys making organic coffees out the front.

Pret’s success is definitely because of the quality of their food, but twice a year the bosses shout a HUGE staff party (I heard they spend about £250K on them). They also run courses at their Training Academy in Victoria for staff to enjoy the double whammy of earning money while studying. And after an initial three-month trial, each new team member receives a salary increase plus a £250 cash gift which is to be handed out to staff who have helped them during their training.

No wonder they were so helpful, I thought, as I finished my shift and went home with a sandwich I had made for a lie down.