Armed with my first ever tickets to an ice hockey game, I was excited to head to the Wells Fargo Center in Philadelphia to watch the Philly Flyers vs New York Rangers. Not that I knew anything about it, but it looks rough and fast on telly.

We arrived just as a rousing rendition of the national anthem was being belted out by a woman standing in the middle of the ice. It was goose-bumpily good and everyone stood, some with their hands over their hearts. 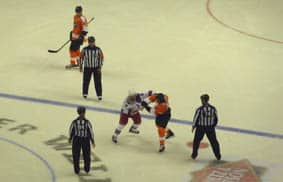 Hockey: a fight with some game thrown in

Then it was time for puck off. This was a grudge match. Last season when these two teams met the Flyers put the Rangers out of the Stanley Cup playoffs. In the first 4 minutes the obligatory first fight broke out. It was rather hilarious. Two guys (Jody Shelley and Derek Boogaard), gloves flung off, stood in a fists-up pose dancing around each other for a few seconds – enough time for the 20,000-strong crowd to get worked up into a fighting frenzy – before the shirt grabbing and head punching began. A bare knuckled punch to the helmet can’t feel too good.

It looked like it was put on for our benefit as the four on-court referees just hovered around. Apparently they don’t step in to break up fights. I guess they don’t want to go for a skate – literally. However if one of the black-and-white-striped refs can grab the guy’s collar before they helmets come off, he will (and did on several more occasions). The penalty for hitting a ref can be a lifetime ban. These two got five minutes each in the sin bin. 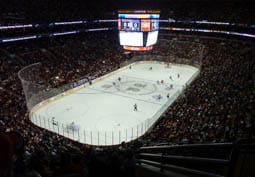 The game is so fast, seven guys on each team doing Torvill and Dean on crack. The court is rounded in the corners so is used to hook the puck right around behind the goal while a couple more wait for it and try to slam it in.

A mesh screen hangs from the roof, about four stories high, to prevent random pucks flying into the teeth of an excitable fan.

The organ plays and the atmosphere builds another notch. By the end of the first (of three) period no one had scored. It was time for beer and a pretzel with a cup of hot nacho dipping cheese.

The man beside me had his three year old grandson with him who wasn’t as excited as granddad hoped he’d be, both dressed in Flyers shirts with the names of their favourite player on the back. At the toilet in the break I met two girls in Flyers shirts (in fact I think we may have been the only people in the crowd in civvies) with two other guys names on their backs. Who do we love?, I asked. A little argument broke out and I still don’t know who the Dan Carter of the Philadelphia Flyers is.

Whenever Bob the goalie did a great save a chant breaks out – Bob, Bob, Bob and his name flashes on the huge screen hanging centre court. Bob (Bobrovsky) made 20 saves and got himself into the NHL Top 10 from this game.

The Flyers slaughtered the Rangers 4-1 making it five wins on the trot. Let’s go Flyers…..!