There’s nothing like seeing a new city with a local. This is the story of Idris in Istanbul…

As soon as we landed we had arranged to meet Idris at our hotel at 11. Idris is a saviour in our family. He is a Turkish guy from Anatolia who has been studying languages and working in Istanbul for 8 years, but how he came across my cousin’s path is so cool. 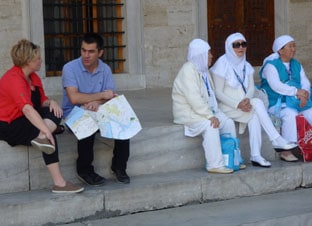 Idris and me chat in front of the Blue Mosque

They were visiting Istanbul about 2 years ago with their then 2-year old son and my uncle and aunt, when the baby suddenly had a febrile convulsion in their hotel. My cousin and his parents were off at the local market, leaving mum and baby at the hotel. Idris was working there at the time when suddenly this distraught woman carrying her lifeless son appeared in the lobby frantically trying to get some help. Idris jumped in a cab with her and did the translation as they headed for the nearest hospital. But that hospital was not the right one for babies, so from there they were bundled into an ambulance and sent to another, Idris with her the whole time. In fact she says today that she was in such a panic that she didn’t realize he was still with them until some time later.

Meanwhile the staff from the hotel went to the market and found the rest of the family and all assembled at the hospital where the baby was treated, kept over night and sent home the next day. Idris still has a photo of him and the little blond toddler when he was up and bouncing around again.

So meeting Idris was something I was looking forward to as there’s nothing like having a local show to you around.

The benefit of a local guide in Istanbul 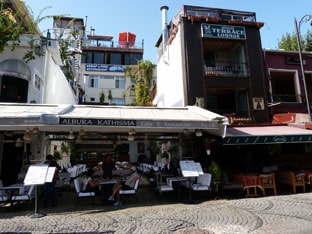 The restaurant above ancient palace caves

We followed Idris like puppies, down to the Metro where he showed us how to use the electronic pass. In fact we used his as we had no Lira and the dispensing machine only took local currency. 1.95TL (75c) per journey anywhere in Istanbul, whether you go one stop or travel all day, just as long as you don’t pass through the turnstile. He helped us buy a card which we loaded with 10TL (5 journeys) and can top up whenever we like.

First stop, the Yeni Mosque and Spice Market. Amazing and colourful and a good start to get you market-savvy for the Grand Bazaar. Piles of powdered spices and tea, dried flowers and Turkish Delight. Here’s my blog for more about the Spice Market.

We then followed him through a labyrinth of back streets, into the Grand Bazaar. And my goodness, what a difference that made. We went the first day with him and the second day on our own – 2 kiwi girls. The first day no one bothered us and Idris got us the best prices just by hovering around. Next day we were cajoled and harangued, and prices were way too high requiring some flirty bartering and the occasional hand up ‘stop’ sign when the badgering got too much. 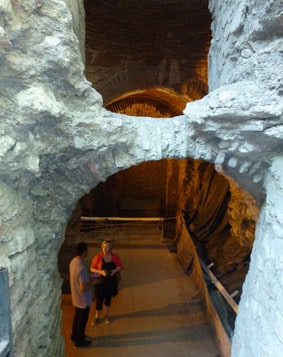 Lunch at Albura Kathisma up some alley was a treat, it’s a restaurant above a palace built by Constantinius in 324AD. We went downstairs and suddenly we’re standing in the original underground caves.

It was great to meet him and have a local show us the ropes. If you’re coming to Istanbul and you want to meet Idris and have him show you around, email him on idrissure@hotmail.com. Remember, he’s a student and you’d pay about €100 for a half day tour of Istanbul with a guide. Be generous!