I have just spent 3 days in Istanbul and here are 5 must-see highlights of this timeless city: 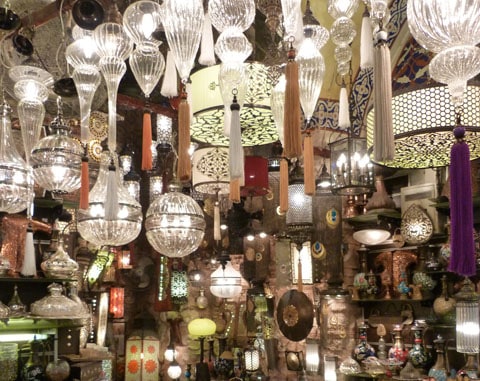 Get your haggling face ready and head to the famous Grand Bazaar – and plan to spend several hours, if not a whole day! They take Turkish Lira and Euros, but the local currency will get you the best prices.

This 600-year old market is a hub of 60 covered streets crammed with 5000 vendors selling everything from antique rugs, glass lamps, ceramic bowls, leather coats, jewellery, cushion covers and more. An absolute gold mine for anyone looking for an authentic and classy souvenir of Turkey.

We came the first day with Idris, our local Turkish friend whose presence alone managed to get us the best prices and no hassles (read my blog about how to contact Idris if you want him to show you around >>>).

The next day my cousin and I returned, intending to stay for 2 hours, then take a hop-on hop-off bus tour of Istanbul. We ended up staying until about 4pm by which time we thinking more of happy hour than a bus tour. But we were called and cajoled by just about every vendor and when it came to trying to do the business of negotiation (over the obligatory apple tea) it was a battle to get them down.

However, all that to say, it didn’t stop me throwing my Turkish Lira around and in my suitcase I have a gorgeous (and heavy) glass lampshade (€110), a handpainted ceramic bowl (€40) and 5 more smaller ones for dips and olives, a hand embroidered cotton cushion cover, a pair of silver earrings (15TL), a leather pouf cushion (25TL – not filled!). As for Kate, she was on a mission to get a leather jacket – the softest lamb skin you ever did feel. Finally, several shops and offers of tea later, she got one for about €100.

Take a business card from the shop you like or you’ll never find it again – unless you drop breadcrumbs. 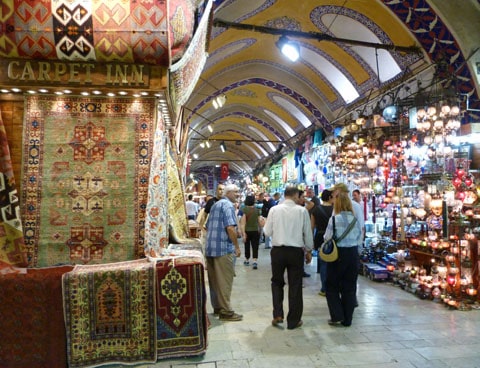 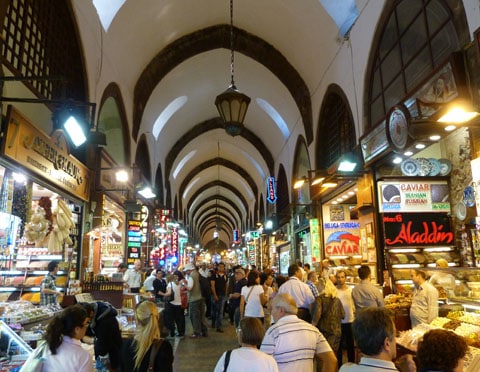 Inside the Spice Market

Next to Yeni Mosque, also called the New Mosque for it’s sprightly age of about 650 years, is the 400-year old Spice Market. My advice is to start your market tours here as it’s a fraction of the size of The Grand Bazaar, just one L-shaped building lined with purveyors of powdered spices, loose leaf tea, Turkish delight, cheese and over the years shops selling a bit more of the Grand Bazaar wares like fabric, glass lights and ceramics.

Three kinds of saffron is sold here, the cheapest and in powder form from India is simply for colour (I have heard it could even be sunflowers), Turkish saffron which is sold as wispy flowers and again really only to colour your dish, but the real macoy is Iranian saffron.

Here’s my blog about the Spice Market (also known at the Egyptian Bazaar) and meeting Mustafa from shop #11, his Iranian saffron sells for 24TL per gram. That’s about NZ$15 per gram and he sells it by the jar. You could drop $100 on a wad the size of a golf ball. 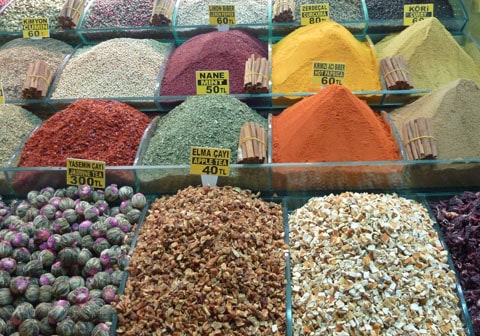 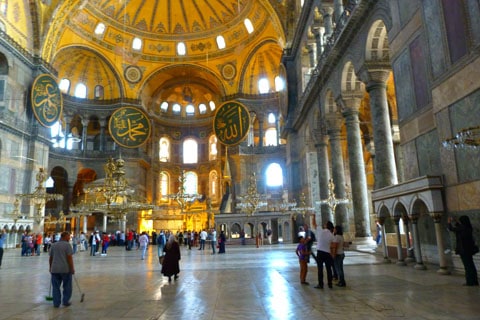 This photo just doesn’t do it justice!

From the outside Ayasofia, also known as Hagia Sofia and St Sophia, is an impressive building, but inside it’s breathtaking. No visitor to Istanbul should miss paying 25TL and wandering around this 2000 year old building.

Originally built as an Orthodox church in the 4th Century, its massive dome in the centre of the grand hall was considered the most impressive in all of Christendom. In the 11th C mosaic paintings of Jesus, Mary and John the Baptist were added to one wall, and while now crumbling, are still here today, undestroyed by the muslims who took over the building in the 16thC.

From this time, muslim symbols were added and Ayasofia became a mosque. Then in the 20thC it became a museum, which it still is today. Not a museum filled with artifacts, for the building itself is the artifact.

There is also free wifi in the café outside! 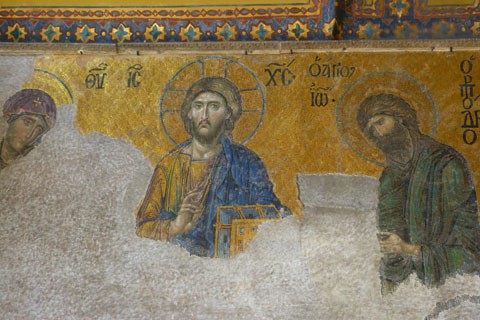 Mosaics from the 4thC when this was a Cathedral 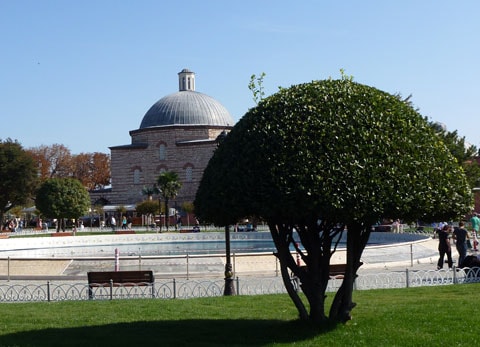 Also known as Sultanahmet Mosque. This is the main mosque in Istanbul and one of the most famous in the Islamic world, a short walk from Ayasofia and amongst the hub of tourist and local activity. Tour buses leave from down here, people with cameras stuck on the ends of their outstretched arms to capture the scene are everywhere. The tram/metro runs past and across the road are cafes and restaurants.

About 6 times a day loud speakers high in the trees ring out with the prayers of the local imam and echo all over the city. For devout muslims, the Blue Mosque is a place to make a pilgrimage to and we saw a group from Khazakstan on a tour.

It gets its nickname, the Blue mosque, from the 16thC blue Iznik tiles decorating the interiors. Shoes are to be removed and a plastic bag is provided so you can carry them with you and not put them on the floor. Cotton head scarves are also available for women, although plenty of western women weren’t wearing them.

After the prayers during which the mosque was closed to the public, we were able to file in and listen to the sermon and while admiring the architecture and taking photos. 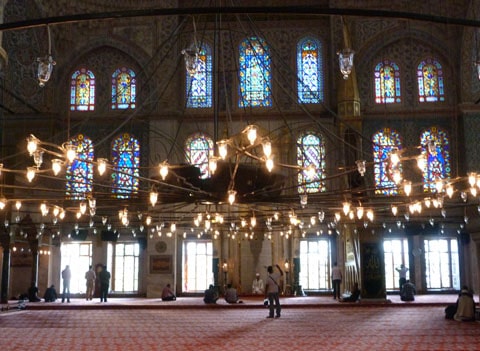 Listening to the sermon inside the Blue Mosque 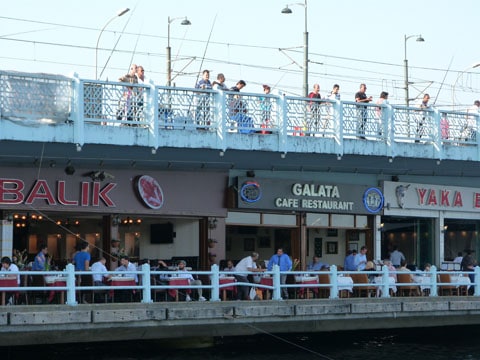 Restaurants under fishermen on the Galata Bridge

This stretches across the Golden Horn in front of the Yeni Mosque and Spice Market. Our hotel was across this bridge so we traipsed across it a few times. It’s on two levels, the top for traffic, pedestrians and fishermen hanging their rods over the side catching fish – which I was told is not that good – called K?

Underneath is a row of restaurants on each side all trying to entice you in with their promise of tea, happy hour or dinner. We stopped here for two sunsets and got chatting to the fun and friendly waiters while getting splashes from the fish being wound in above us or the bait dangling about table height – until they were shouted at by our maitre d.

Galata Bridge is known for its fish sandwiches and the first restaurant you come to will have fresh fillets on a barbecue ready to be served in crusty bread.

This a fantastic spot for a drink at sunset on the western side and watch the ferries busily moving back and forth taking commuters and tourists hither and thither.

Metro stop: Eminonu on the city side or Karakoy on the port side. 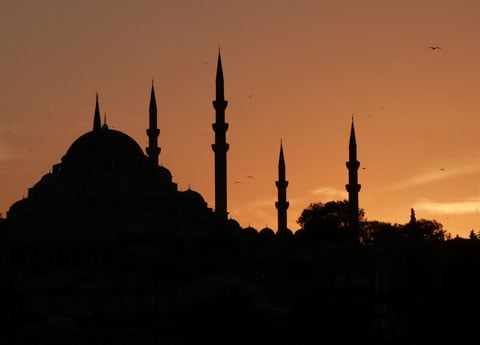 Sunset from the Galata Bridge