I’ve discovered Uber! The online taxi service sweeping the world and getting up the noses of mainstream taxi companies everywhere.

But as with changes in other sectors (downloadable music, movies and books), I can’t see any city or country really able to stamp it out – and to be honest, I don’t think they should. Ok, sort out the city registration fees, levies and taxes, as that seems to be the biggest complaint. But honestly, mainstream companies need to keep up with what Uber offers. 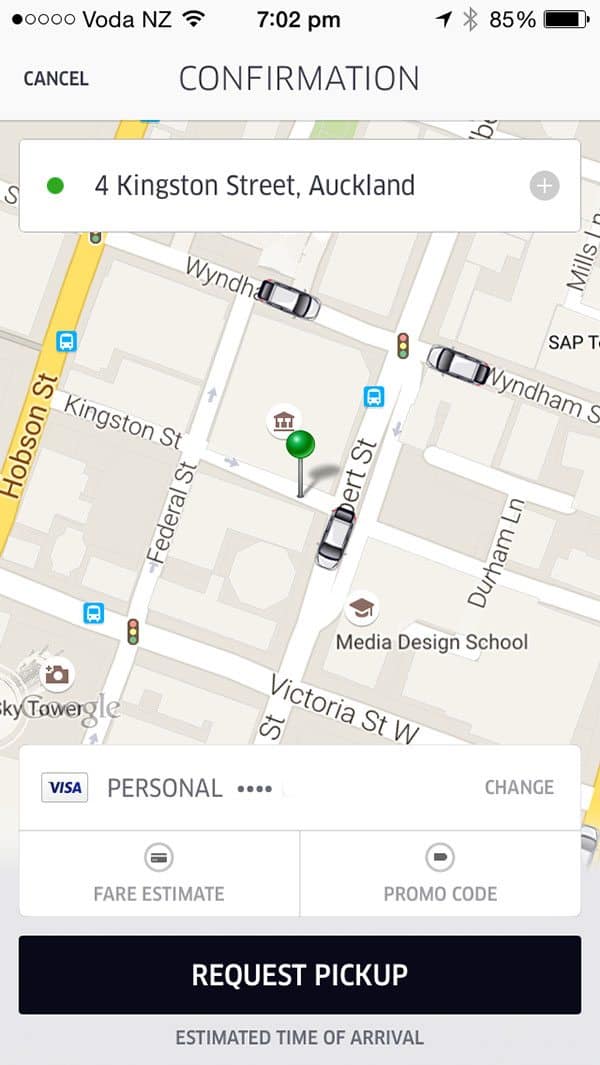 There are 3 cars only moments away!

Firstly let me clear up the matter of insurance and licensing.

I asked every driver I met about their business and depending on what level of Uber car you book (Uber, UberX – cheapest of all, UberXL – larger for groups and airport runs, Uber Black – top of the range of vehicle like a town car) depends on the price you are charged. In every case when I asked about liability they told me the fees they pay to be insured to carry passengers. But what I’m pretty sure they don’t do is pay a city registration to be a cabbie, and therein lies the problem that mainstream companies have with Uber. I would have thought it was a fixable problem: Force them to be registered, because what they offer is leaps and bounds ahead of traditional taxi companies.

1. Book & pay on your phone. When you download the Uber app to your smart phone you enter your name and credit card details and no cash ever changes hands. Just open the app, select your pick up location, type in your destination. Done. Even tips are included. You can also split the fare on the app if you and your friend are going to different places.

2. See your nearest cab. In the pic above you can see that there are three cars near my location. Note: this can often be out by 20 or so metres which can make a difference if you are standing at a busy address. My tip is that you override the GPS location and type the hotel name or street number. The closest car will be pinged when you hit request, his or her name will pop up on your screen along with a description of their car and you’ll watch them driving to you. You’ll also get a text when they arrive.

3. Star rating system. All the Uber drivers I have met are really nice and the reason is because when you get out of the car you need to rate your ride by hitting the appropriate star from 1-5. If a driver falls below 4.5 star rating they are suspended for a day or so. Consequently you’ll find drivers ready to give you tips on where you might like to visit in their city, tell you all about how business is going, and anything else. Contrast that to the taxi driver in Dallas who wanted to quote us a flat rate of $25 for a drive to dinner across town and when we said no, we’d like the meter on, he proceeded to “get lost” three times finally racking up a bill of $20. An Uber car would have been about $7 and included the tip.

4. Safety. I honestly believe, as a single traveler, Uber is safer than a cab you might just flag down on the street. Firstly they know who you are, your details are on file. You know who they are, their name, car type and license plate number pops up on your phone before they arrive. You can also email your route to someone so if you wanted to be extra safe, send it to your friend and tell them you’re on your way.

5. Cost. But the best part, and the part that is causing grief, is that they are so cheap. About a third of the cost of a normal taxi. And the cars are much tidier and newer too. These unbelievably low prices make you realise just how much we’re ripped off by other cab companies when this business model is not only surviving, but the drivers I spoke to are happy with the living they are making.

6. Uber now picks up at airports. For years Uber was not allowed to pick up passengers, but thankfully airport authorities have reached the conclusion that if Uber pays the levies, they can pick up. When you arrive at LAX you can go up the escalators or lifts to the departures level and you will find a “shared ride” space where everyone is gathered looking at their cellphones waiting for their Uber pick up. As a side note, I took a flight to Fort Lauderdale instead of Miami International and saved about $400 on the tickets. I took an Uber 40 minutes to South Beach and paid under $40.

Just like what streaming movies has done to videos and DVDs and digital photos to film and dark rooms, taxi companies need to have a rethink about the way they do business, the fees they charge their franchisees that passengers absorb, and they get into the 21st century with technology and their service.

As far as I can see, Uber is here to stay.

added to the cost & cleanliness of the car is the timeliness of the pick up! Pick up is timed so you can be ready & waiting! So good!! My husband joined because of a recent trip to Sydney & is soooo happy!

It's so easy isn't it. And I always quiz the drivers as to how they're doing, and everyone seems happy to be drivers. So that's good!