Sheila Humphries is a remarkable woman. She’s an acclaimed Aboriginal artist, an elder and a woman whose story begins when she was forcibly removed from her family as part of Australia’s shameful lost generation. And today I am in her kitchen learning how to paint Aboriginal dot art while she tells her story.

The 70+ mother of 8, grandmother of 30 and great grand mother of 16 is even in the Guiness Book of Records for her contribution to a 10,000 square metre painting from coloured sand that was photographed from space. 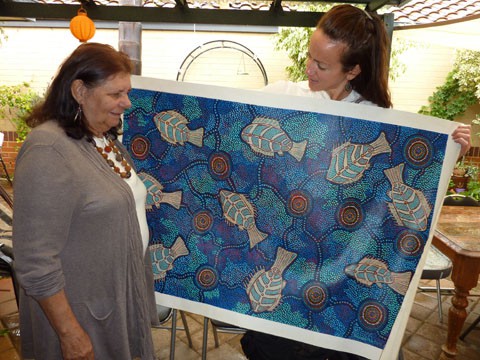 Sheila and Rebecca show off one of her paintings

We sit at her table and Rebecca, our tour guide who has been fortunate enough to get to know Sheila and include a visit to her house as part of her Urban Indigenous Tours, puts the kettle on to make tea. 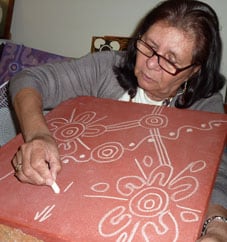 As Sheila paints, explaining the Aboriginal symbols and what they each mean, I scribble notes and the other journos in the room sniffle into their hankies. Not that I’m a hard hearted, I was just too busy taking notes to let the gravity of her story really sink in.

At the age of 4 her parents took her and her sister to St Joseph’s Orphanage for Aboriginal girls in New Norcia, north of Perth, in the hopes that they would have a better life than the one their poor parents could provide. She had 8 sisters and a step-brother in a one-bedroom house. But her treatment in this orphanage was what has us crying. She was told she would never amount to anything, that Aborigines just sit under trees getting drunk (she made a vow then never to drink and she never has) and each day the girls did chores, washing clothes, ironing (1 day she ironed 205 shirts) and cleaning.

At the age of 8 her parents decided to move to Perth to get their children a better education and came back for her and her sister. But the girls were branded absconders and a police alert was put out to arrest them, then aged 8 and 10. Within 3 months they were forcibly removed their parents.

When Sheila describes that day she remembers her mum had a hammer in her hand, there was screaming and they were literally pulled from their mother’s arms and sent back to the orphanage where they went to work as little maids. Two years later, she remembers vividly, the reverend mother coming to her and saying, “your mother has died. Get back to work.” Their father came to visit on a strict time allowance. She remembers no comfort from that devastating news and he was asked to leave because she had to get back to prayers.

Let’s just say white people were not Sheila’s favourite race. She lived there until she was 18 and some girls were in their mid-20s, still playing games in the dirt, making dolls and gathering flotsam from the rubbish to make a miniature village, she recalls. Never maturing into young women. They were also never taught personal hygiene, they lived in the same clothes for a week and bathed in the washing machine water. A Spanish nun told them they were vain if they were caught brushing their hair or looking at their reflection in a window. Fortunately a young Australian nun came and taught the girls about cleanliness.

By the time she left, her parents had both passed away, she didn’t know her people and had no extended family. “We had our happy times, but I’m sad to say, they were outweighed by the sad times,” she says with far away eyes but a gentle face that smiles easily.

Sheila’s saviour came in the form of her husband, a lovely Aboriginal man who taught her how to love and be loved. She went to college and studied for 2 years – thinking it was going to be a program to help Aboriginal adults to read and write, it turned out to be a college course and she eventually graduated. They had 8 children and set their lives on a course to change their world and “help just one child at a time”.

Her husband has now passed away but with 30 grand kids and 18 great grand kids her home is a happy one. Paintings hang everywhere and she teaches school groups and tourists like me how to paint those amazing dot art paintings. Her large canvasses sell for up to $3000 directly from her, and I asked her to paint me one (much smaller and cheaper!) and it arrived in the post a few months later. I love it because it’s Sheila’s and her story is one of amazing triumph through a journey of intense pain. 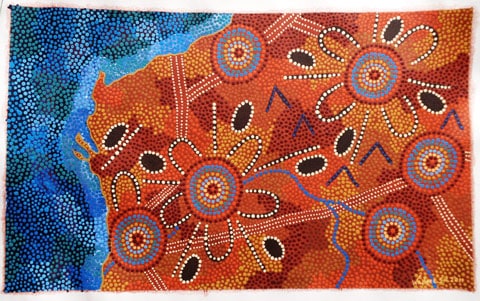 My painting of the Kimberley, by Sheila Humphries. She mixes her own paints to capture the perfect colours.

THAT'S MY GRANDMOTHER! I AM ONE OF EIGHTEEN GREAT GRANDCHILDREN OF HERS!!

Oh how amazing! This has given me goose bumps. How is she? I have her piece of art in my home and just love it! x