It was for research purposes, you understand that I attended a Thunder from Downunder show in Las Vegas.

I had met Matty, the extroverted (and, ahem, quite cut) Aussie who acts as publicist for the racy boys called Thunder from Downunder in Las Vegas at a media event earlier in the day.

Come to a show, he insisted. Can I interview the kiwi lads in the group, I asked? Sure. 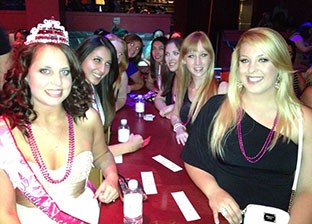 Just one of the bachelorette parties in the audience tonight

And so it was that I found myself sitting in front of a gaggle of bachelorettes on a hen night, the squeals building with every flicker of the lights, waiting for the show to begin.

Billed as a “male revue”, these are Ladies Nights and they make no bones about it. The only men I saw there were husbands looking extraordinarily uncomfortable with every cheeky butt wiggle.

These shows in the Excalibur Hotel and Casino have been running since 2000 in various incarnations and while they proudly call themselves 100% full blooded Aussie male, the best dancers in the show are the kiwis. And I have that straight from an Aussie mouth.

So how do a bunch of kiwi guys end up baring (virtually) all on the Las Vegas strip 12 times a week? 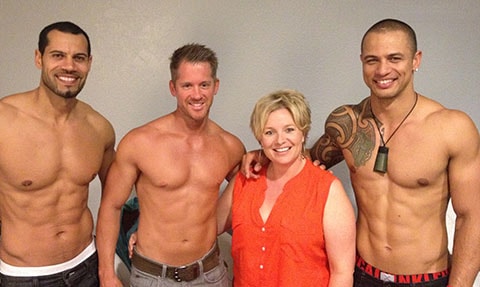 The Kiwi Thunder from Downunder are Ryan, Dave, Me! and Aidan. Do I look uncomfortable?!

Ryan Arbaugh (on the left) has been performing in Las Vegas for 7 years. The former model had done catwalk shows all over the world, but had not been known to gyrate on the dance floor until he joined the Thunders. He’s the shyest of the bunch and while the others do a solo number with a girl they pick from the audience, he hasn’t. Yet. 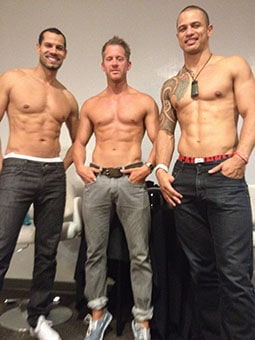 Check out Dave on his tippy toes!

Dave (centre) stood on his tip toes for this photo. He’s been here for 11 years and also tours internationally dropping his daks and dressing as a fireman or policeman of an evening. In fact he goes right back to the original Kiwi Fire and now splits his time between his home in LA and the shows he’s in in Las Vegas.

Then we have Aidan Tepuke (right) who was a rugby player from the Waikato who started dancing to help a girl out that he had a crush on at the time. She needed dancers in a club in the ‘Tron and he said he’d do it. Today he is the focus of hundreds of screaming girls every night with the smouldering smile he’s perfected and the X-rated solo dance he does with one lucky girl from the audience.

I was sitting in the show the night before, hoping that I would not get picked for a solo (and I wasn’t!) so I asked Aidan how he chooses the girl. Apparently black girls have more chance of being selected (by him anyway) and the night I was there, it was she who was working it on the stage as Aidan did his magic. 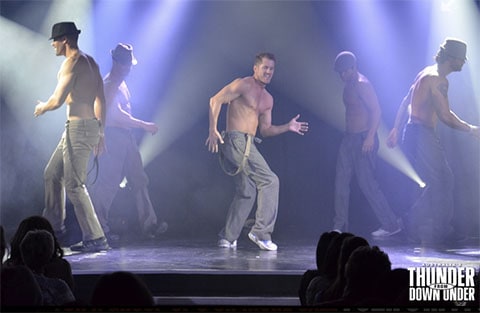 Dave struts his stuff centre stage with the Thunders

I said to a friend that Thunder from Downunder was ruder than I expected. Well what were you thinking, he said. It’s a strip show! And that it is. It’s a strip show, it’s raunchy, it’s fun and funny, it’s entertaining and the squealing from the hundreds of girls (and their mothers!) in the room will ring in your ears for days. Literally.

I live in Auckland ,New Zealand. I've been to the show in Las Vegas last week ,was on a stage , Aiden picked me up from the audience. Was very new show for me...But i really enjoy it..... Awesome and great ...Thanks Aiden :)))