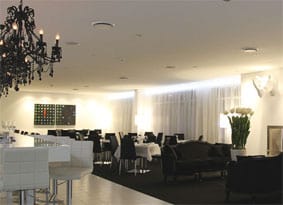 The lounge bar and restaurant

And it’s the grooviest thing to hit Rotorua since – goodness, is there anything groovy about Rotorua? Certainly nothing like this: we’re talking rhinestone-studded rhinoceros heads above the fireplace, black chandeliers and white leather.

I spent the weekend in Rotorua to get amongst New Zealand culture as I am tasked with revising a New Zealand country guidebook. It’s been an interesting job, mainly involving checking 200 pages of email addresses, websites, opening hours and phone numbers. But for some of it I have decided I need to go and see for myself.

Rotorua for three days was just the ticket and even though the weather prohibited much luge action or zorb globe riding in a giant inflatable ball, it did not prohibit soaking in the Polynesian pools followed by a mud wrap massage or eating and drinking in this chic hotel.

The newest hotel in town is also one of the oldest.

The Regent of Rotorua is in the newly redesigned 1960s motel units on Pukaki Street, right in town. The old concrete brick walls have been plastered over, the rooms gutted and refitted, designer furniture and linen has been brought in and everything is white and black glamour with lime accessories. 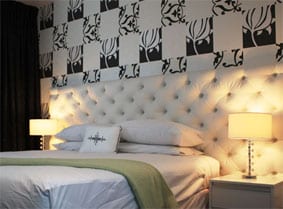 A new building accommodates the aforementioned restaurant and bar with the rhino heads – which owner Darryn Whitehead said caused a bit of a ruckus in the customs xrays. Real rhinoceros heads are banned in NZ but plaster ones are fine. They’ve purpose built one and two-bedroom suites that have also been decorated with their signature stylish yet retro vibe, but the rest of the place is “the old girl”, as Darryn calls her.

The Regent of Rotorua already sits at number 1 of 103 Rotorua hotels reviewed on Tripadvisor and this little chic boutique hotel could just as easily fit into the Los Angeles scene I reckon.

Alas I didn’t stay – if only I’d known about it (rooms start at $179). But I did have dinner there in the restaurant that opened last Tuesday. So new it was that the indoor/outdoor gas fire was still to arrive and larger tables for 2 to dine tapas style turned up at 5pm – too late to be switched in for the night.

Black chandeliers pop against white leather seat backs, tables and walls. Glitzy sequinned crowns on the back wall and dramatic black and white feature wallpaper add a touch of over-the-top, but they make no apology for that.

The place was hopping when we went – clearly the locals have been waiting for the Regent of Rotorua with much alacrity. The small plates (tapas) menu is what we went for – 5 little dishes including salt and pepper squid, duck confit spring rolls. We had the hand cut chips and even  had room for pudding. They also do main meals.

When the weather’s nice you’ll be able to have your drinks outside in the courtyard around the geothermally heated pool, or sit under the soon-to-arrive cabana and in the communal open area. I can imagine some groovy DJ mixing tracks outside and apart from the odd waft of sulphur, you could be in West Hollywood.