The best things to do in Singapore

Home » The best things to do in Singapore

Singapore has caught the attention of the world recently after the mega meeting with the megalomanics. So I thought I would put together this list of some of the best things to do in Singapore for the hoi polloi and picked the brains of Singapore Tourism to help me find some of the heroes as well as some hidden gems that I have discovered. Things that Donald Trump and Kim Jong Un could have done if they’d stayed on for a few days…

I remember my very first trip to England was via Singapore – waaaay back in about 1988 as a teen! (Back when the airplane had a smoking section and I was one row in front of it – no curtain of course – and thought I might die). I was a slither of my current self too and one evening sitting in a restaurant on Orchard Road with my friend, the waiter was staring and then he said to me “you are hugggge”! I was so stunned. I weighed about 8-9 stone (about 50-60kgs). But then Asians have always been tinier than those of us from the thick-of-thigh origins of the Motherland. If they really want to see huge, they should look at me now! Lol, I wasn’t offended, more shocked that one: he would think that and two: that he would say that! If only I had that body now…

Anyhoo, I wasn’t put off Singapore and have visited three or four more times over the years, spending stupid money on Singapore Slings at Raffles and shopping at malls and markets and eating everything from street food to fine dining, so if it’s been a while since you’ve been to Singapore, or you’re researching for your first trip, here are some ideas to get you started.

The best things to do in Singapore

Sentosa Island
If you’re travelling with kids, Sentosa Island is a great place to base yourselves. You’ve got theme parks and water parks and Universal Studios, plus a 3km beach for those hot and sticky days. There’s a championship golf course, swanky resorts and a huge array of dining options along the waterfront. About a dozen hotels are located over here and you’re only 15 minutes from the central city, either by monorail from Vivo Centre shopping mall or take the cable car from Harbourfront. Read more about what there is to do on Sentosa Island here >>

Gardens by the Bay
Gardens by the Bay is an ‘only in Singapore’ attraction set over 101 hectares including towering glasshouses and an amazing laser light and music Garden Rhapsody show every evening at 7.45pm or 8.45pm. Located behind the iconic Marina Bay Sands hotel, the awe-inspiring space also includes the Supertree Grove of metal trees that you climb up inside, embedded with tropical plants, and walk along the canopy. The Cloud Forest dome is a mysterious world veiled in mist, where guests can take in mountain views surrounded by diverse vegetation, as well as learn about rare plants and the environment. Listed as the largest glass greenhouse in the world by 2015 Guinness World Records, the Flower Dome is filled with plants and flowers from the Mediterranean and semi-arid regions. 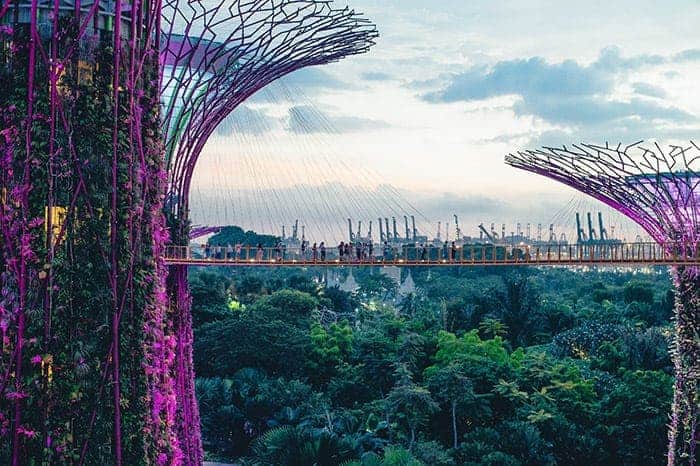 Walling in the treetops at Gardens by the Bay. Photo by Annie Spratt on Unsplash

Bugis Mall
If shopping is your thing, but the high end boutiques on Orchard Road are not friendly to your wallet, Bugis Junction is where you’ll want to go. There are over 100 stalls with local and international brands and in one area it has a real market feel. Come here for dining too, from food court to restaurants. Open 10am-10pm and has its own MRT train station.

Chinatown is a favourite cultural hot spot even among the locals. The heart of Chinatown is a bustling, colourful mix of old and new, with night markets, spas and delicious dim sum restaurants. You’ll find popular bakeries like Tong Heng Oriental Pastry on South Bridge Road, hawker stalls and cool bars along Club Street.

Must stop bars along Ang Siang Road include Oxwell and Co, Operation Dagger and the Nutmeg & Clove. Or head to Potato Head in a four story heritage building on Keong Saik Road for a cocktails and a burger to listen to their visiting DJs on the rooftop bar. 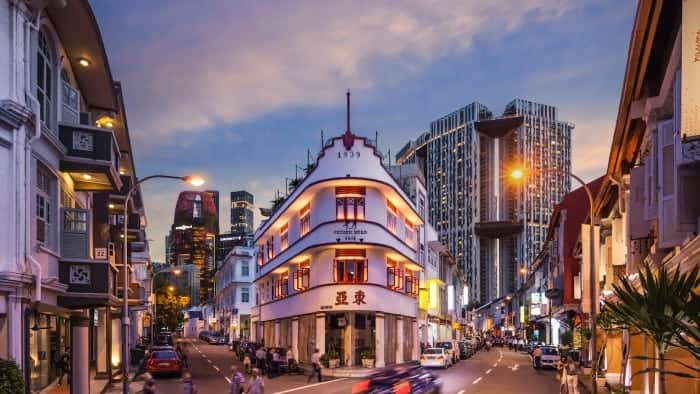 Potato Head is inside this 4 story heritage building

Universal Studios Singapore is Southeast Asia’s first movie theme park and it’s on Sentosa Island. Delve into thrilling world of Movie Magic in seven distinct zones including Far Far Away, SCI-FI City and The Lost World. Each zone is filled with movie themed attractions and state of the art rides such as Madagascar: A Crate Adventure, Shrek 4D Adventure and the augmented reality experience with dinosaurs, Jurassic Park Rapids. 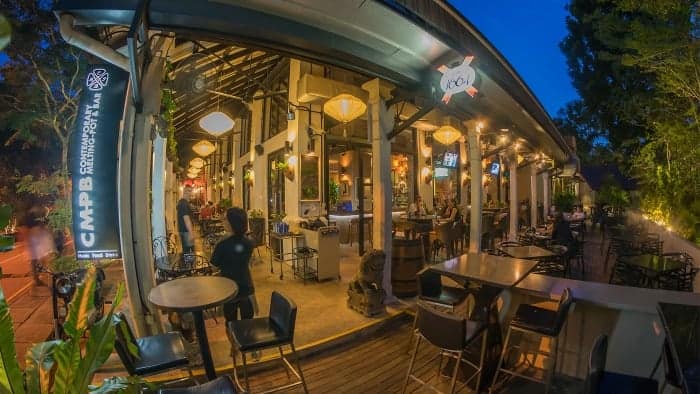 One of the restaurants at Dempsey Hill

2am: dessertbar
This is the ultimate destination for dessert lovers! Located in the chic Holland Village, 2am Dessert Bar is famous for its sumptuous modern desserts and great wine list.  Try their smoked white chocolate with hibiscus jelly and cinnamon beads, which the word on the street is to die for.  This delightfully sinful haunt is open until 2am Monday to Saturday.

Boon Tat Street aka “Satay Street”
When night falls, the road is closed and out come the hawker stands on Singapore’s famous “satay street” between 7pm – 2am every night.  Order from sizzling stalls selling mouth-watering satay sticks for about 50c each and other Malay delights like mee goreng and barbecued chicken wings, and enjoy your cheap and cheerful meal at plastic tables with a pint of beer.

Getting around in Singapore

There are several Hop On Hop Off Bus companies where you can hop on an off all day and they travel to places like the zoo, Gardens by the Bay, the drinking and dining hot spot of Clarke Quay.

The simplest way for zipping around is to get a one, two or three day MRT (Mass Rapid Transport) pass as most stations are located near the main attractions. $10 for a day, $15 for 2 days, $20 for 3 days.

Taxis in Singapore are reasonable but just know that they are only allowed to stop in designated areas. Surcharges apply at various times of the day and night too. Uber has been recently banned, but they have Grab, so download that and you’re good to go. Again, just make sure you’re standing in a place where they are allowed to stop – i.e. not along a busy road. 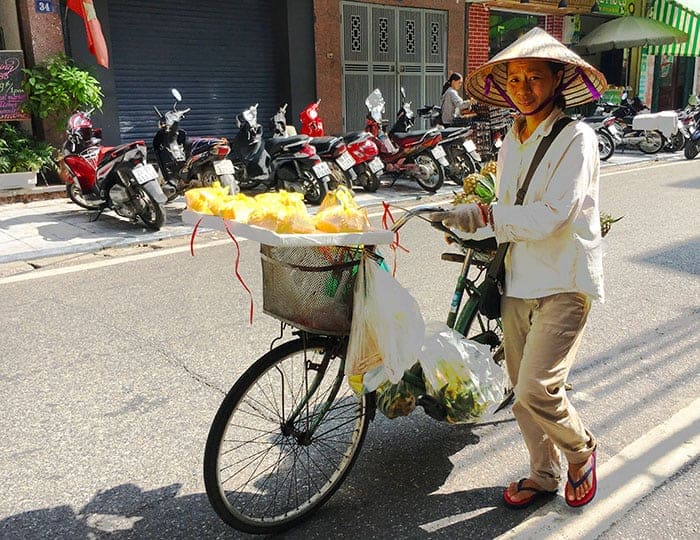 What to pack for a trip to Vietnam
← Read Last Post 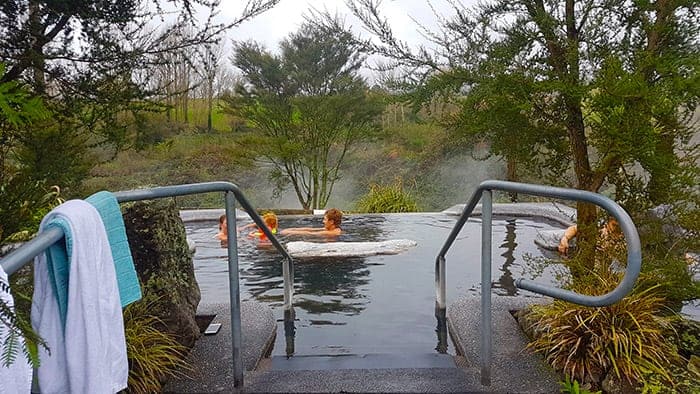