If foraged fine dining is your thing, read on!

If fine-dining on locally sourced food (including bugs and moss) created by a boundary-pushing imaginative Chilean chef on a tiny street at the back of Christchurch’s Port Hills sounds like you, then pour yourself a wine and settle in for a read and a drool through my photo gallery.

It was a chilly winter’s night when we arrived at award-winning Roots Restaurant in Lyttelton for what was to be an evening of not just eating and drinking, but of my horizons being widened and stretched into places that were way beyond my imagination and certainly beyond what I thought my taste buds would bear. 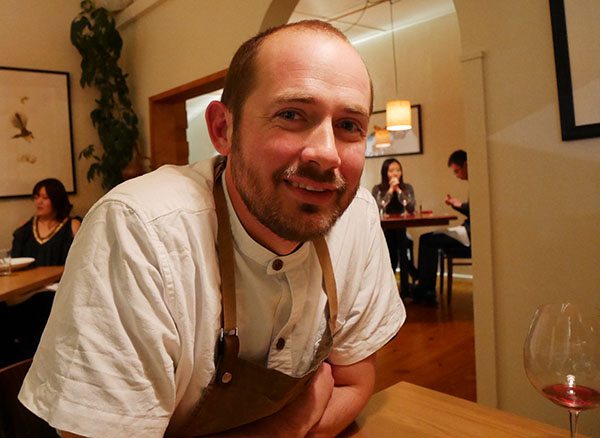 Guilio and his wife Christy’s story is such a great one: He’s Chilean born, raised in Equador. She’s from Laguna Beach, California. They met in the hospo industry and now have two little girls and call Lyttelton home. But it’s not been all caviar and cuvee. Soon after the earthquake, with no jobs like so many other Christchurchans and the small community of Lyttelton being hit very hard, they’d only been here a year and says the money got so tight it was a luxury to take the car through the tunnel into the city.

But loving our country and not wanting to raise their family anywhere else, he started from scratch selling bits and pieces of his great cooking at the local farmer’s market. They scrimped and saved and managed to buy this restaurant in 2012. For nine months no one came. It had only six tables and his imaginative degustation menus have now become so sought after there can be a two month waiting list in summer with people travelling from as far as Japan and the Middle East just to dine here. Adding an extension meant another four tables, and that’s the way they like it. “It’s not about the money,” he says. 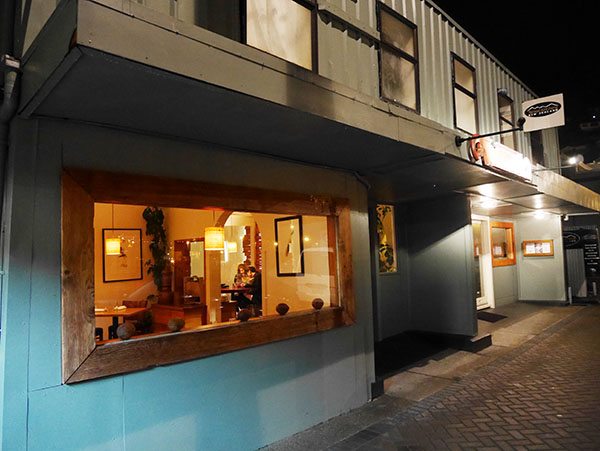 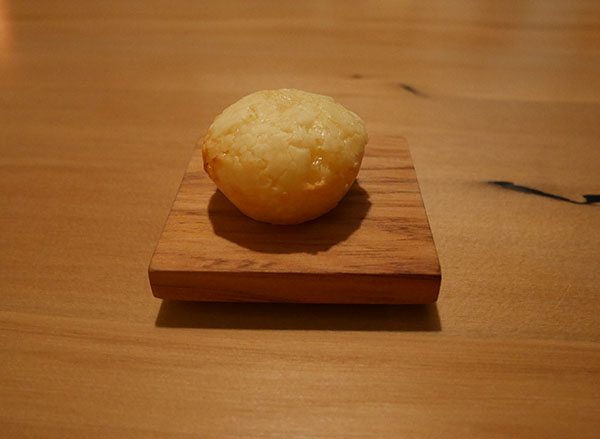 Pane de yuca (or warm cheese bread to you and me) 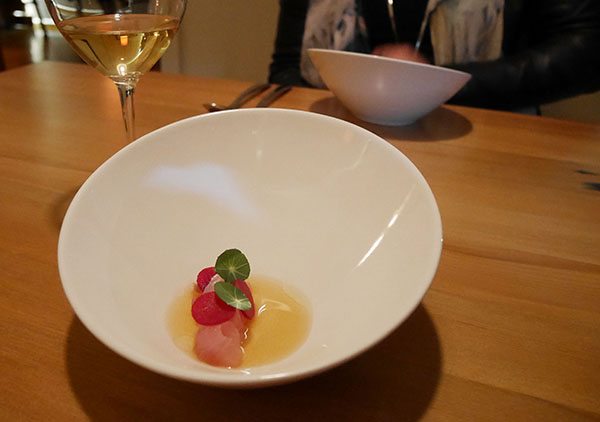 Cured kingfish in a lemon and hibiscus broth 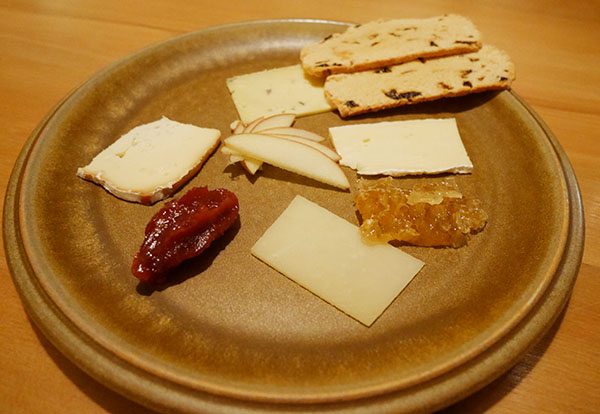 A little cheese break with honey from their hive 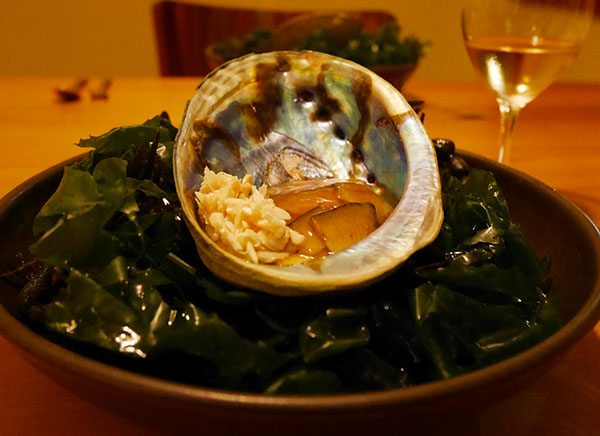 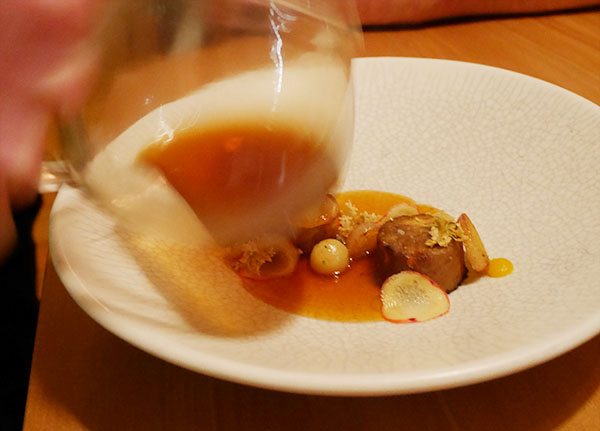 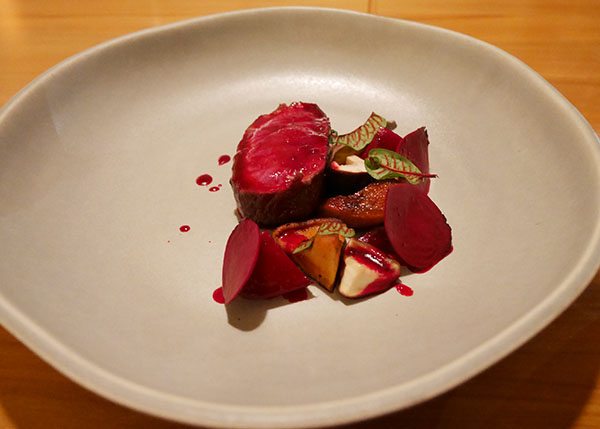 Venison with beetroot and mushrooms 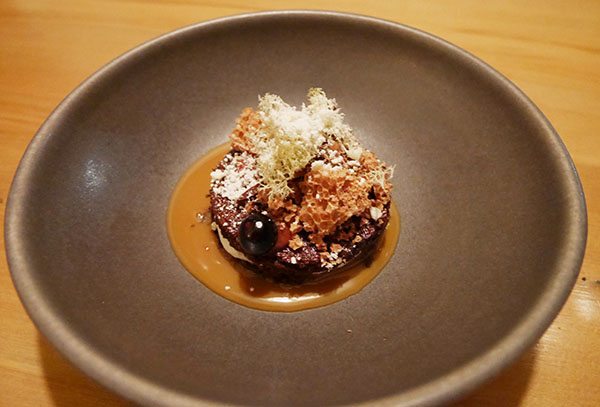 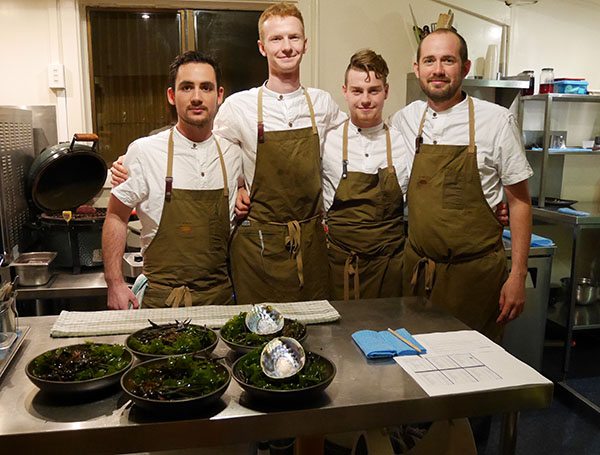 Chef Guilio (on the right) and his team!

Roots is closed on Sunday and Monday. But while I liked to think that was all about taking time off, it’s really so that he can go foraging. He’s a voracious reader and has started an online community where like-minded chefs around New Zealand discuss their ideas. So when he went to the west coast and found reindeer moss on a family hike, he brought it back to the restaurant to dehydrate and serve dusted in white chocolate powder with dessert. It was incredible. “Candy moss,” I named it and his eyes lit up. I might have contributed to the menu!

Guilio’s always pushing boundaries with his menus too. His paua (abalone) is steamed for five hours in sea water then left in its liquid for two days. Walnuts are peeled with tweezers and the dish is served in a peacock blue paua shell with an egg tofu on a bed of deep dark green seaweed. He makes everything from scratch. Even his own soya sauce comes from New Zealand soy beans that were fermenting as we spoke. A beehive in the garden out the back makes enough honey to serve with cheese.

Expect to find the craziest things on his menu that is never printed. You won’t know what’s coming next. All you’ll be asked when you make your booking is if you have any food allergies. They won’t ask if you eat seaweed or ants or moss or flowers. Or pig brains. If they did you’d probably say no and miss out on a meal that I can honestly say goes down as the best I’ve ever had. (Sorry you Michelin folks!)

I would call it fine dining, especially when you can wine-match each course. But the atmosphere is not that. It’s intimate, sure with fine food, but there are no white table cloths. Although the white napkins are hand made by them!

Look around and you’ll see couples getting engaged (one did while we were there). The supremely knowledgeable Manuel Hesse from Germany adds the air of fine dining, bringing the plates and explaining what is on them and matching them with wine. He and Christy shared that duty around the full restaurant on this chilly Tuesday night.

I was lucky enough to hog Guilio’s time the whole evening and peppered him with questions from first bite to last. But that’s his style too. He and his team prep all day, they test new ideas and dishes every day to get guest feedback before deciding if it’s a keeper, then when it comes to service, he often leaves them to it and chats with the customers.

I’m not surprised Roots won Cuisine Magazine‘s Restaurant of the Year for 2015. You deserve it!