Rob Broadfield is the author of the West Australia Good Food Guide, and bumping into him in the departure lounge at Johannesburg airport, I cornered him for his top picks in his home town. 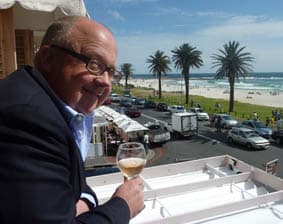 The food critic enjoys a drop in Capetown

As it happens, the 2011 West Australia Good Food Guide has just been released, but as its content is not online, I have the inside track into five of his top recommendations.

1.  Clarkes of North Beach. Rob totally rates young chef Stephen Clarke who he believes is cooking the best modern food in Perth. The restaurant has a surprisingly daggy 1960s shop front in a far flung northern suburb, but it’s worth the trek.

Favourite dish of the critic? The pork. Stephen cooks it whole first then serves it in tiny portions cooked in different, mouth-watering ways.

2.  Star Anise. This is probably the most written about and awarded restaurant in all of Perth. It’s owned by super chef David Coomer and offers signature degustation menus as well as a la carte. Rob’s pick for favourite dish here is mahor (galloping horse) which consists of minced duck, peanuts, seared scallops and pineapple, all served in tiny portions.

Open for dinner from Tuesday to Saturday, 225 Onslow Road

If you want the recipe for mahor, click here >>>

3.  Amusé. This is a degustation only restaurant in East Perth. Come hungry for your nine courses of simple dishes “amped to the max”. Chef Hadleigh Troy also does all the modern things with foams and gels and the West Australia Good Food Guide have just named him Chef of the Year for 2011.

4.  Galileo. This restaurant serves classic Italian and is most famous for its wood fired and rotisserie meats like goat, duck, pork and venison. Both the owners are also the chefs so emphasis is on good food and the décor is simple and rustic.

5.  Nahm Thai. Rob reckons this is simply the best Asian cooking in Perth with supercharged Thai flavours coming from young chef Kevin Pham – who incidentally is training to be a lawyer. The flavours are mindblowing and he is being compared to celebrity chef David Thompson. Let’s hope the Bar doesn’t want him!

Click here for Rob Broadfield’s Top picks for brunch in Perth and if you’re looking for somewhere to stay, how about Miss Maud, a Swedish hotel smack in the heart of town and famous for its smorgasbords.