I am about to embark on an 8-day whirl with Rail Europe from London: Belgium, France and Switzerland.

Eight days in six cities with 12 strangers is probably not the way most tourists would do it, but I’m here to work (ahem). Photographing millennia-old cities and experiencing the vast Rail Europe system is a hard job, but never fear, I’m willing to sacrifice myself for the sake of the mighty pen (well actually a keyboard). 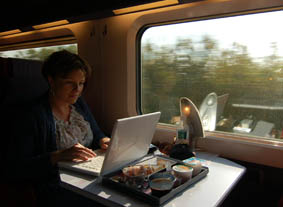 The Eurostar from London to Brussels took about 2.5 hours and suddenly we were in the middle of the city. To be honest, the countrysides look pretty much the same… farms, hedges, old homes with thatched roofs. 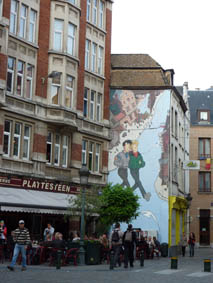 But did you know Tin Tin and the Smurfs are Belgium’s claim to fame? As well as beer. And chocolates of course. But here in Brussels you’ll find 36 huge cartoon murals painted on buildings and walls around the city. In fact a cartoon tour of Brussels would be a fab little story idea. (I’ll bet my dress it’s been done before).

I was surprised by Brussels. It was far prettier than I expected. Cobblestoned streets, old buildings, flowers, these huge murals, pubs and chocolatiers. We toured the newly opened Magritte Museum and had a cute little guide who spoke exotic English and wore mussed up hair who was so enthusiastic I almost wanted to do a Masters on the subject myself. Magritte pushed the boundaries with his art and did actually become successful before he died. Unlike most famous artists, sadly.

The most famous statue here is this little one called Mannequin Pis. Yes, he is peeing into the fountain. What we weren’t expecting amid the melee of tourists photographing the cheeky tyke was the woman who walked up in her trench coat and flashed us all while her male partner took the pics. So stunned was our little group of journalists that no one took a pic! (Or did they…) 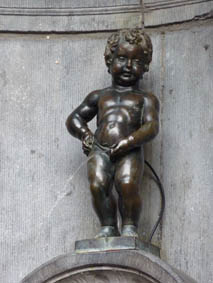