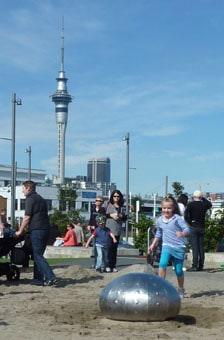 My turn on the sea egg!

The old tank farm has been spruced up down on North Wharf and Aucklanders have found a new urban playground. Quite literally.

The kid’s playground is one of the best I’ve seen and if you haven’t hauled your children down here yet, you need to. It has kiwiana-themed objects like sea eggs and big iron shells filled with sand to crawl through. Things spin and swing and can be climbed on and instead of that dreadful black rubber or sawdust chip that so many playgrounds are covered in, this one is sand. Genius.

There’s a basketball court – well more like a single hoop and several colourful lines painted on to the concrete, ala American cool kids style. 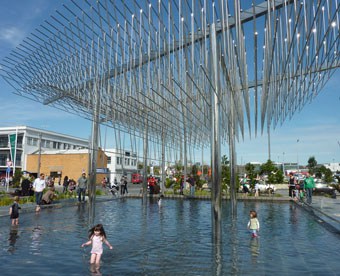 Walk past the steel windcharm thingy to the old fish market which has freshly caught fish and imported varieties – like monster Alaskan crab legs. They also have a seafood cooking school here which makes a different birthday gift for any foodie.

Cafes and bars face the all-day sun, but this is still a working wharf. Fishing boats might be moored alongside and you won’t want to wander along here in your killer heels because the old train tracks make quite a patchwork.

The tram imported from Melbourne is a pretty touch although completely pointless to my mind. For $5 per adult and $1 per child it goes around about 4 blocks. That’s it. A 1.5km circuit down Jellicoe St, Halsey, Gaunt and Daldy in 15 minutes.

Now if it went over the bridge to Te Wero Island, or even chugged between the newly opened Sofitel and Voadafone to the Viaduct, it’d be worth it. 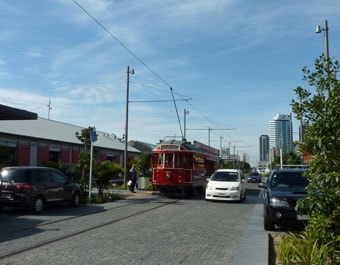 Cars, trams, people, pushchairs and bikes. Get rid of the cars!

But aside from that, the cobblestoned street it tootles down (which, by the way should be pedestrianised and ban all cars that are only driving along to be nosey) is lovely and that opens onto the new Viaduct.

The Events Centre is where I watched the RWC opening ceremony from and have attended a few events in its first year. Huge wooden loungers are rolled into place out the front and new steps have been built down to the water beside Emirates Team New Zealand’s yacht base which make a perfect lunch spot in the sun. 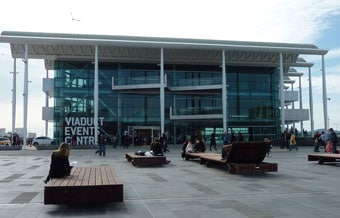 I’m a fan of Jack Tar for a gastro pub experience and on a nice day, sit outside under the umbrellas.